Less More
05 May 2014 20:38 #34697 by Gasia
Gilligan's Island Tribute Mod was created by Gasia
First Off, Huge thanks to Thermaltake, and Enermax who have sent me parts to make this mod happen!

First off, I would like to state that this is a sponsored build. As such I would like to thank Thermaltake, Enermax, and Sapphire Gaming for their contributions to this build! Many other sponsors have offered to help with this build, and I will update this posting with sponsor info as I get it.

This log will be kept up to date to the best of my abilities, however for the most current updates I recommend following me on Facebook or Twitter. (www.facebook.com/nick.gasia or www.twitter.com/CompRite205)

Now that all that is done! On with the build!

This build is in honor of the professor on the cast of Gilligan's Island, who recently passed away. Don't know what Gilligan's Island is? Are you sure YOU were not trapped on a deserted island for 11 years? (Or 30?)

I am starting from the base design of a Thermaltake Tsunami Case. Yes, its like 10 years old. Here is the reasoning for doing so. In the final episode of Gilligan's Island, they were rescued due in part to a massive tsunami that they rode out into the shipping lanes in their bamboo huts. So how fitting would it be to use a Thermaltake Tsunami case and remake the entire thing out of bamboo? Thus a mod is born...

I started by stripping down the case, punching out all the rivets and getting a feel for the design of each panel. The base design was nothing particularly unique. The front panel however, is special. For those of you who are not familiar with the case, see the image below. 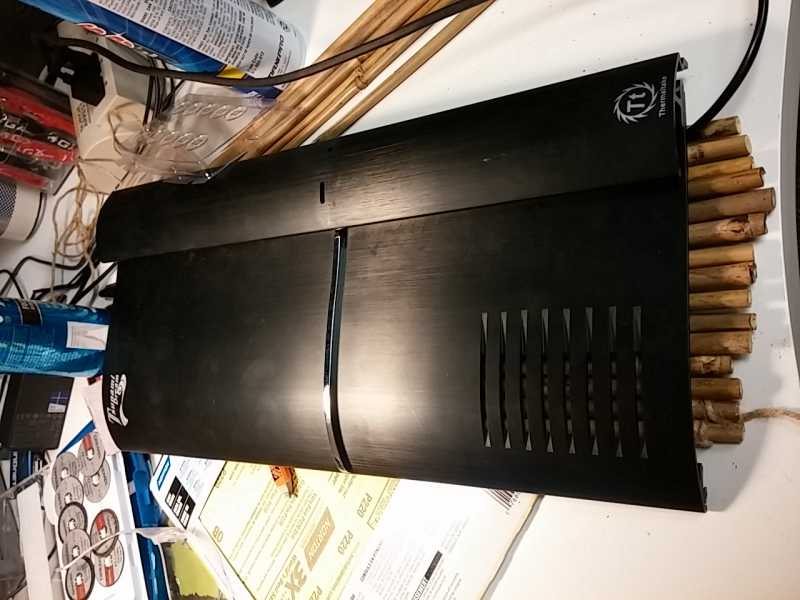 I am going to replicate this out of bamboo and try to keep the feel of the case as close to this as possible.

Here is where things change. I want to bring this case back from the dead, so to speak. I will be upgrading the usb ports to 3.0, installing HD Audio, NeoPixel based LED Lighting system, and a few other improvements to hardware.

I will be adding 3x120 fan mounts to the top, while staying within the original design size of about 18"x18"x10". I also will be adding 2x120 fan mounts on the front. This is to allow me to install the full loop water cooling system I have planned out for it. The top panel, instead of being a flat top with the front panel header, we will have a modular sequence of vents, all made of bamboo that can regulate and direct airflow, but at the same time still lay almost flush. I will be moving the front input/output panels to the front of the case, and flush mount them inside of the frame.

I will for sure be modding a set of headphones from Thermaltake (Model T.B.A.) and replace the plastics with coconuts. What Gilligans Island tribute build would be complete without coconut accessories? I will look into what I can do to a keyboard, but I am still very much in the design phase on that.

All of the Fans, that are being sponsored by Enermax, are going to be disassembled and rebuilt with as much bamboo as possible. Currently I plan on replacing the shroud, and fan blades for sure. I am still working on a motor mounting system for them.

Time Frame:
Hardware from sponsors are en-route now. I ordered 500+ feet of bamboo to come in sometime this week. I am hoping to have a completed mod by July for display at PDXLAN Summer Lan. But for sure by The Charity LAN in November.

Pictures will be up when I start the building phase. CG/CAD Drawings will come as I finish them.

Keep tuned for updates later this week!
I love taking things a part! Putting them back together again is sometimes a challenge... often requiring a hammer.... and glue...

Less More
05 May 2014 21:26 #34698 by Gasia
Replied by Gasia on topic Gilligan's Island Tribute Mod
Here are some CG images. The bamboo just arrived, so you will see some construction shots soon. 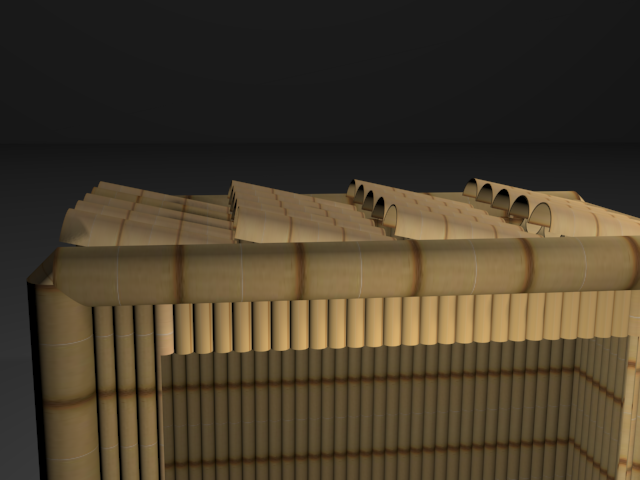 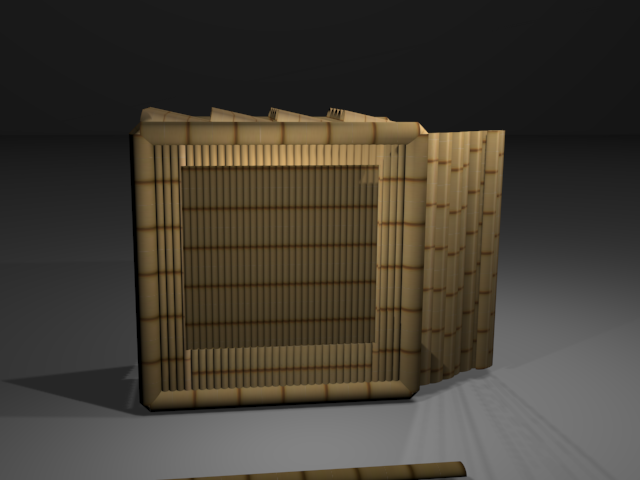 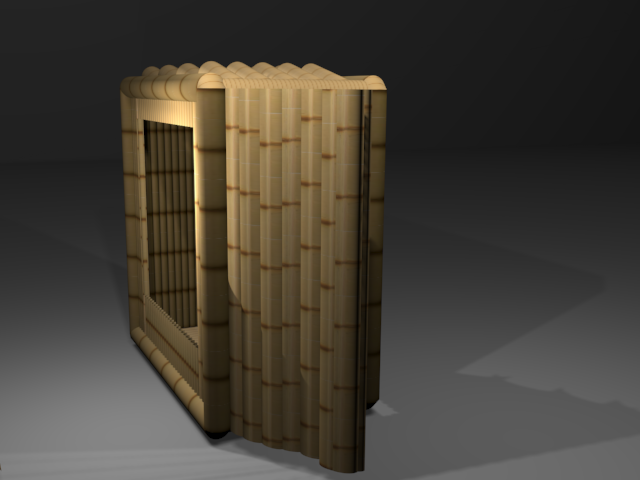 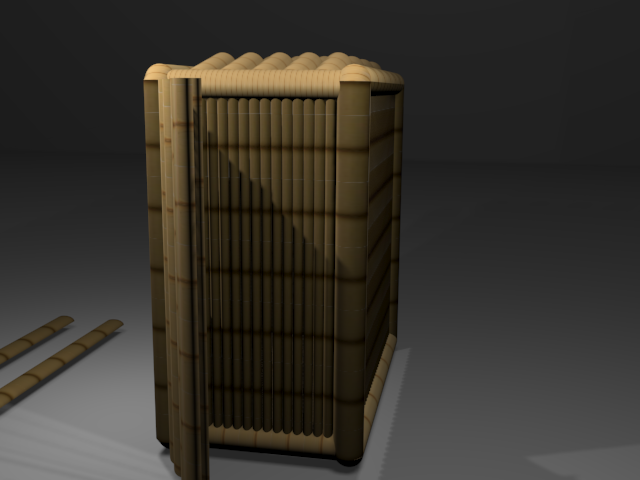 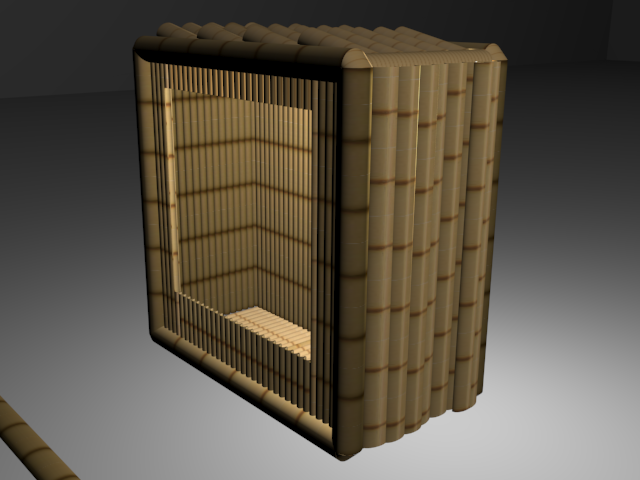 I love taking things a part! Putting them back together again is sometimes a challenge... often requiring a hammer.... and glue...

Less More
05 May 2014 21:36 #34699 by Gasia
Replied by Gasia on topic Gilligan's Island Tribute Mod
So the bamboo arrived. Looks great! totally ready to see what it looks like when I am finished. 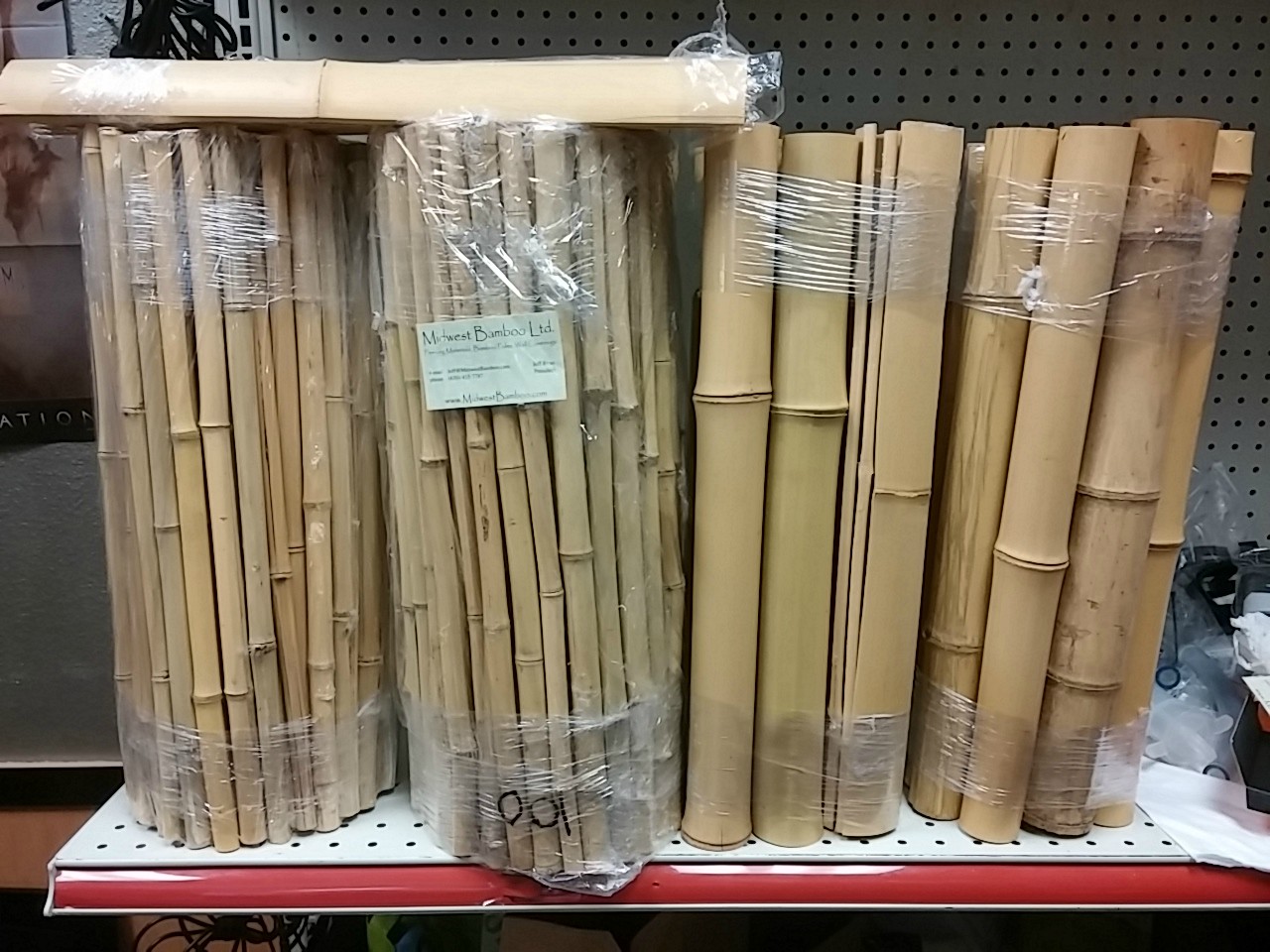 I love taking things a part! Putting them back together again is sometimes a challenge... often requiring a hammer.... and glue...

Less More
06 May 2014 03:06 #34701 by Gasia
Replied by Gasia on topic Gilligan's Island Tribute Mod
Started work on the frame... drilled a hole, then with a sanding bit, I slowly made it larger until the other shaft fit within. A little gorilla glue and some twine to pull it tight. let it dry overnight and check on it in the morning.
https://i.imgur.com/cM0jqdj.jpg?1
Now I get to tinker with the front panel. The front panel is going to be the hardest part of the whole build, so I felt I should start now.

The front panel is a sweeping wave like curve, that will have to be made from rounded half cylinders that are not straight, and have lumps in odd places... yeah... so I decided to take the edges out of the equation and build my curve a little different than in my CG Images. after all, nothing ever really works out like in the drawings...

So this is what I came up with as the best solution out of 5 different ones I made today.

Time to go home for some much needed sleep...
I love taking things a part! Putting them back together again is sometimes a challenge... often requiring a hammer.... and glue...

Less More
10 May 2014 00:49 #34707 by Wooderson
Replied by Wooderson on topic Gilligan's Island Tribute Mod
That is an ambitious project I hope it turns out. Do you have any pics of other Mods you have done. Best of luck with you current Mod and I'm looking forward to seeing more pics of it soon.
I kill CPU's

Less More
10 May 2014 02:33 #34708 by Gasia
Replied by Gasia on topic Gilligan's Island Tribute Mod
Most of the mods I do are for client builds. I keep pictures of something I particularly enjoyed, but I have no interest in posting them.

This mod is for me. I wanted to do something just because I could. So many of the mods I end up doing are for someone who either doesn't understand, or appreciate the work that went into it. They want something because they saw so-and-so had one, or they saw something like this in a magazine, so they wanted something similar. That feels like cheating to me. lol.

I appreciate the diversity that is modding. There are so many talented modders out there who do some truly amazing work. I decided that I needed to branch out and do something just for fun. When someone is paying for it, you cater to their needs. So this build is for me, and I get to do it how I want.

This build is going to charity when I am done. I have not decided exactly how I am giving it away, either as a raffle to raise money for a charity, or as a donation to a kids organization that needs it. What I do know, is that it will go where it can be most useful.

Thanks for your post! I appreciate the interest! I am having more fun than I (or my wife) know what to do with. Overtime in the shop is the norm now. I usually forget to go home and my wife has to drag me to bed. lol
I love taking things a part! Putting them back together again is sometimes a challenge... often requiring a hammer.... and glue...

Less More
12 May 2014 19:21 #34712 by garfi3ld
Replied by garfi3ld on topic Gilligan's Island Tribute Mod
Looking forward to seeing more of this build. Especially with it being sponsored by a few friends of LanOC
Wes

Less More
12 May 2014 19:54 - 12 May 2014 19:57 #34720 by Gasia
Replied by Gasia on topic Gilligan's Island Tribute Mod
Okay... sorta recovered from the weekend... So here is where we are on the build! I have the base panel built for the front, I am still working on the rear supports for it to hold it rigidly in place. Right now it is quite flexible and will happily roll up like a tarp at the worst possible time... 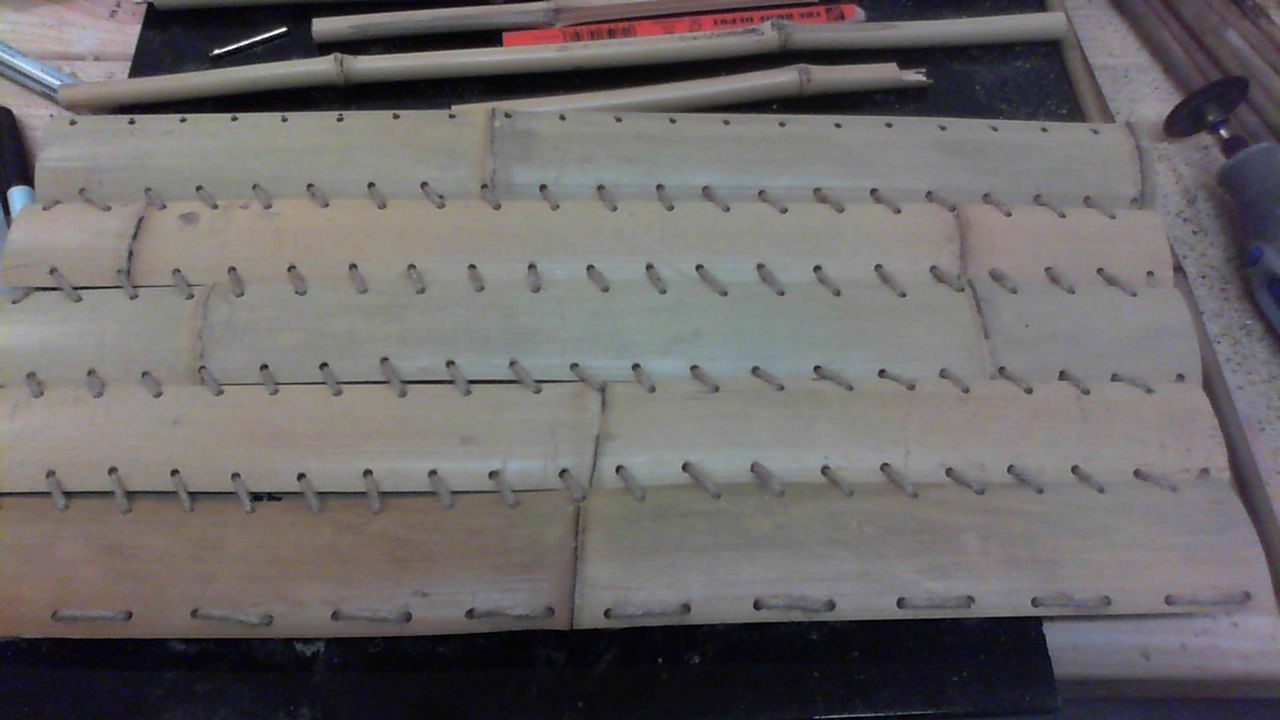 After that I started working on this wonderful power supply from Thermaltake. Shannon was quite amused when I sent him a picture of their "warranty void if removed" sticker attached to the work bench...
I removed all the guts from the power supply and started sketching out new panels to replace all of the metal casing with Bamboo. I was originally going to replicate it with full 1/2" rods, but decided against it, as it would make the power supply enormous... 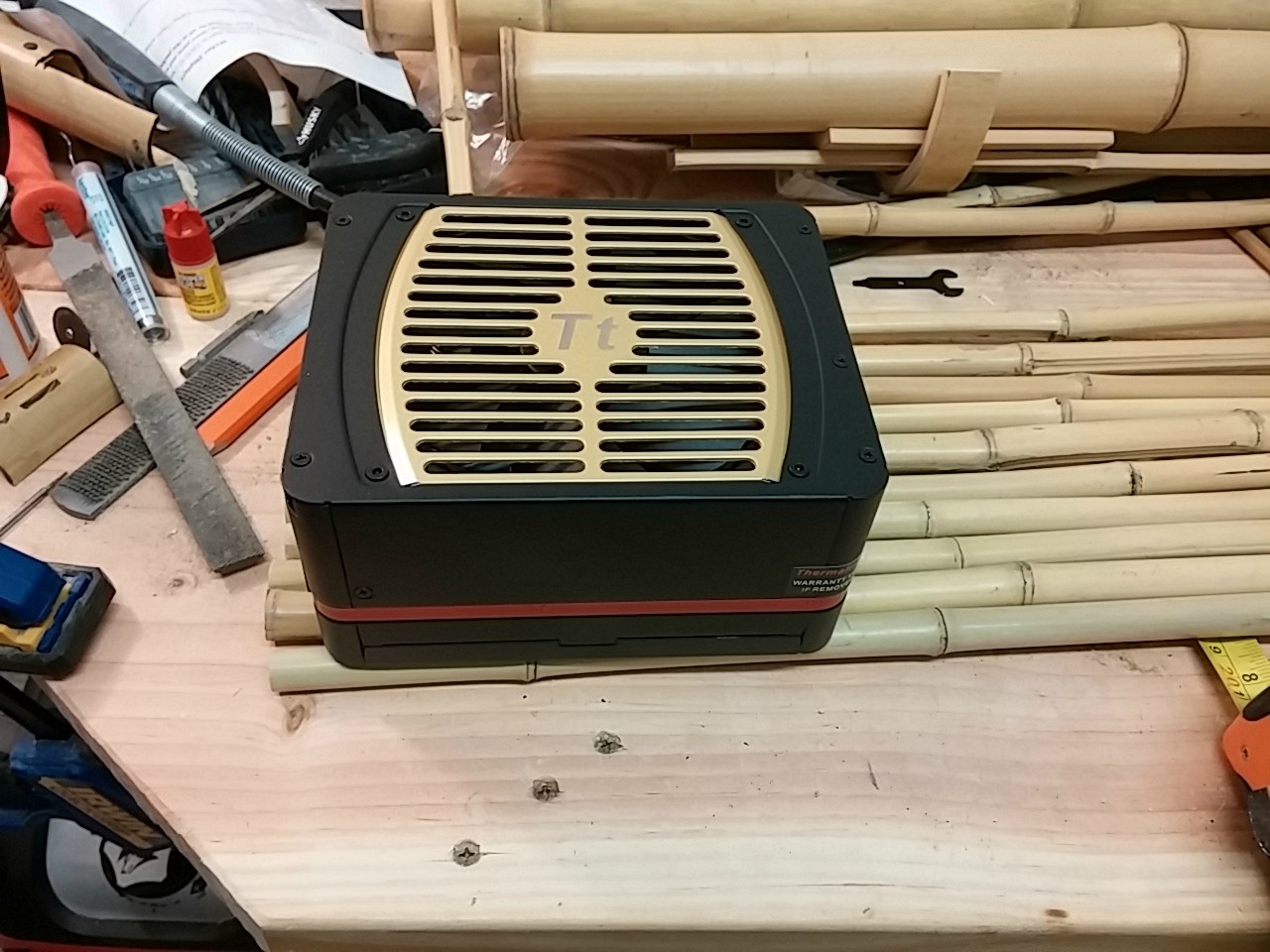 After careful concideration, (5 broken pieces and 2 cutting wheels...) I decided to go with bamboo slats which give it a similar look, but are MUCH thinner. I am matching up panels now. 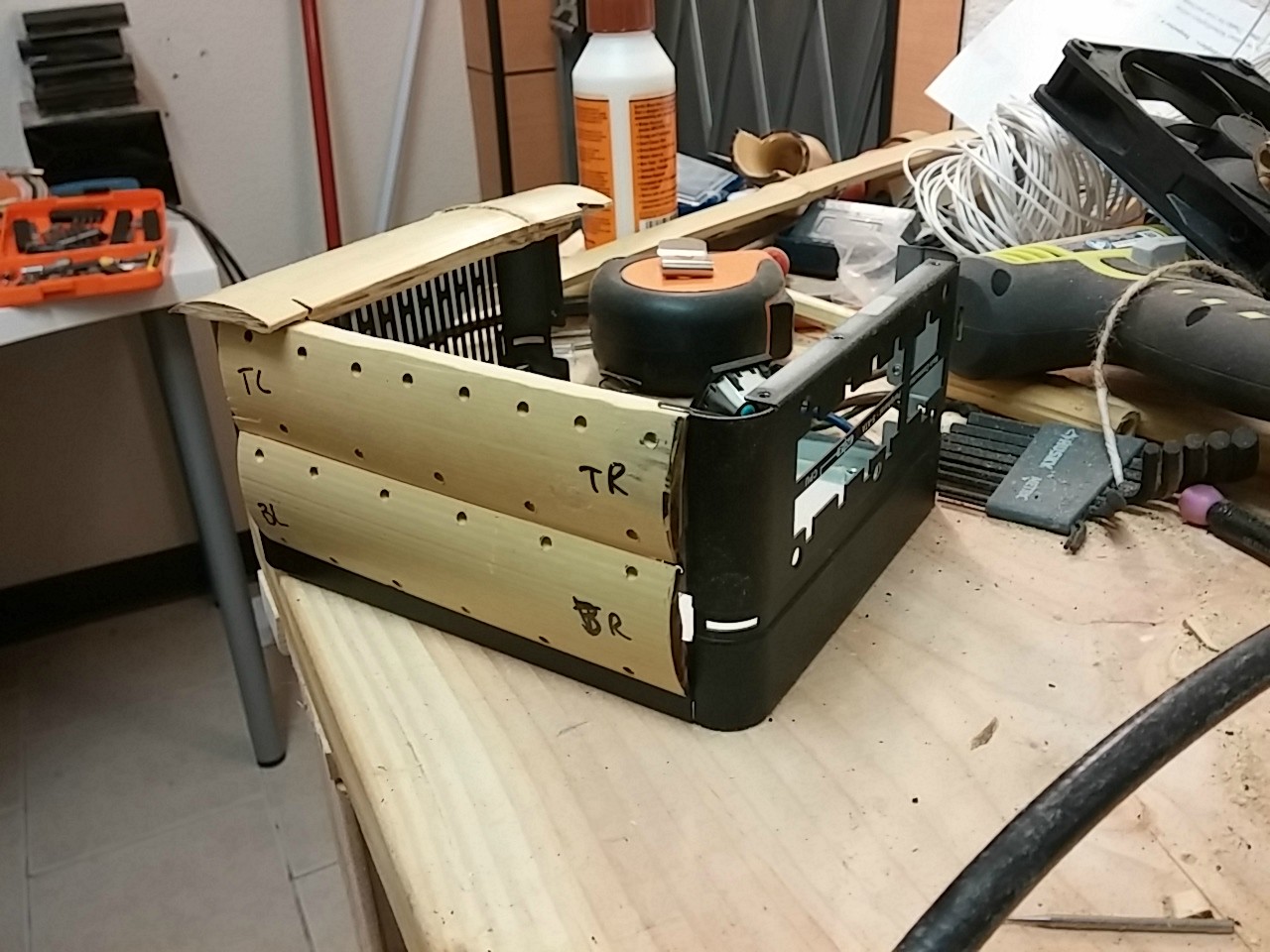 unfortunately, the brand new Dremel 4000 I purchased decided it was being over-worked and promptly killed my rotary attachment which then tried to assault me with a whirling metal cable at 25,000RPM. Thankfully I survived to mod another day... the bit however... well that's home depot's problem... 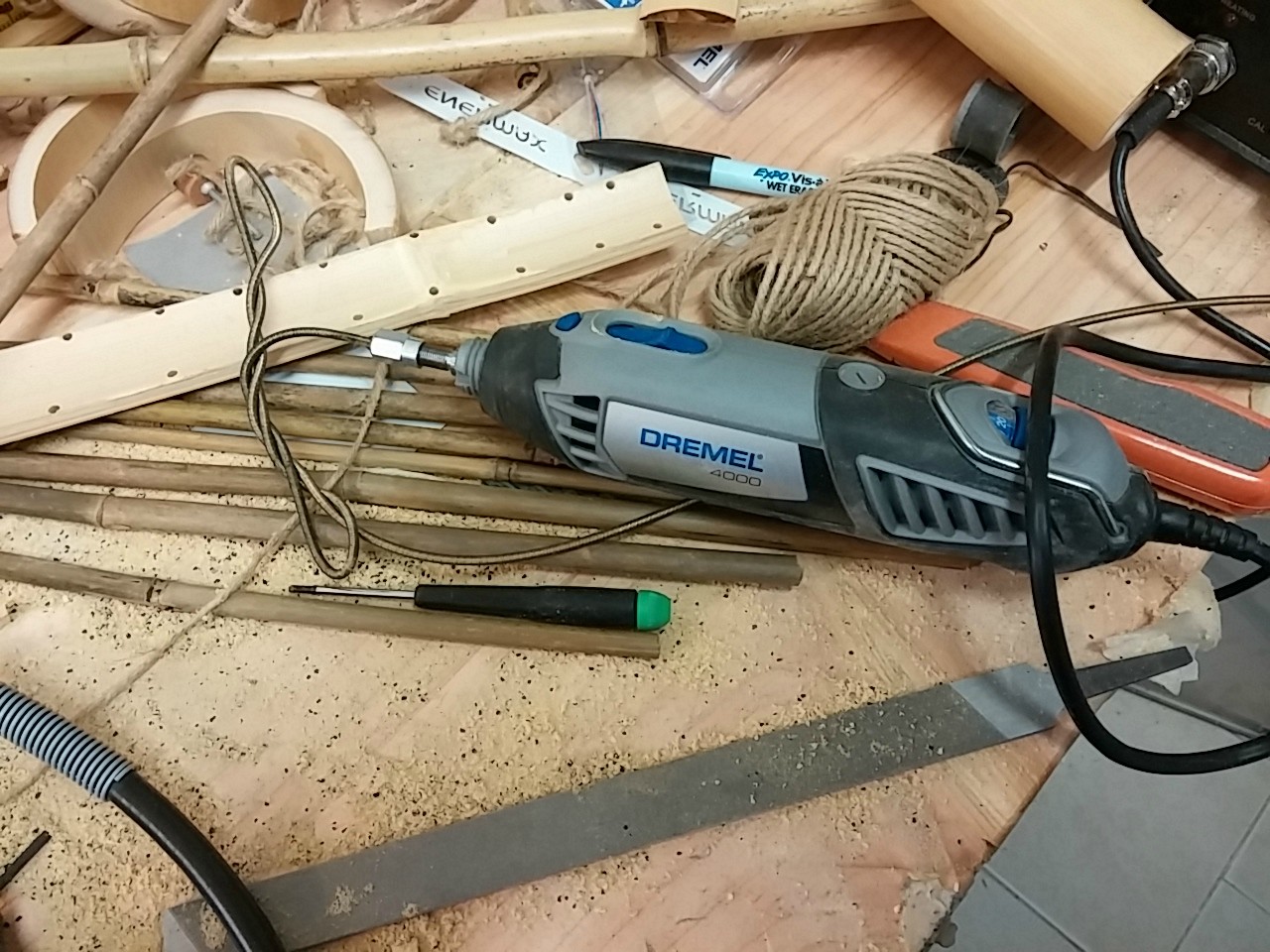 Sleeving arrived on Saturday!
This sleeving is the Telios line from Lutro0 Customs. If you have never tried it, do so. It is by far the best sleeving I have had the pleasure of using on a build. While not an official sponsor of this build I would still recommend it over any other sleeving I have used. (which is a lot...) He also carries a full line of modding tools and materials which is convenient. Check out his site at Lutro0-customs.com/ 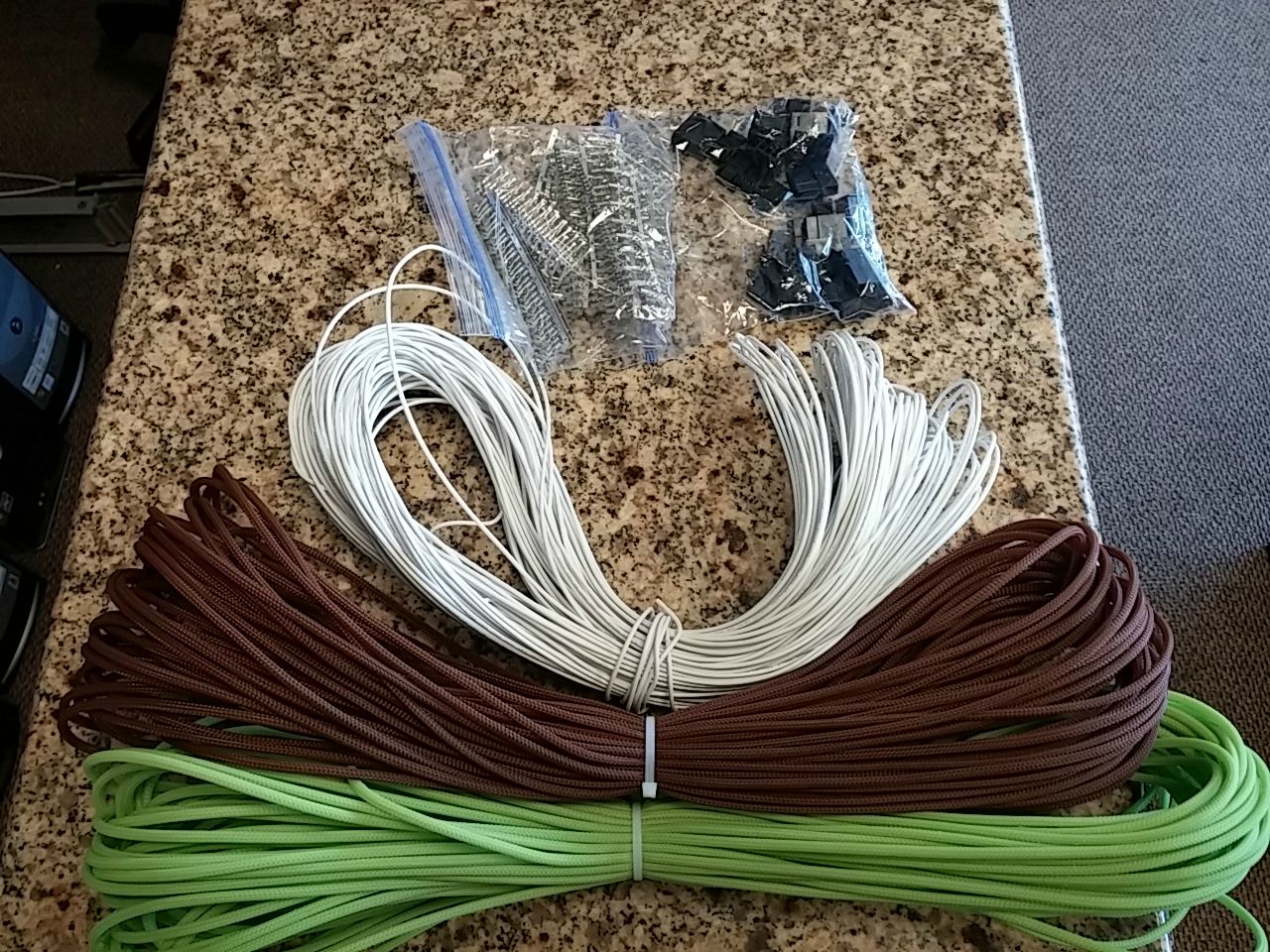 I love taking things a part! Putting them back together again is sometimes a challenge... often requiring a hammer.... and glue...
Last edit: 12 May 2014 19:57 by Gasia. Reason: images wouldn't load correctly

Less More
24 May 2014 23:22 #34809 by Gasia
Replied by Gasia on topic Gilligan's Island Tribute Mod
Not a good day for the mod... one of the core frame pieces split at the base today. I am glueing it as we speak. Should be fine, but that piece has about 10 hours of work put into it and I dont fancy doing it again... On other news, I managed to get the front panel frame completed, before I split part of it. It is going to work out well. I will post pictures of it when it is no longer being glued. lol.
I love taking things a part! Putting them back together again is sometimes a challenge... often requiring a hammer.... and glue...

We have 1151 guests and one member online