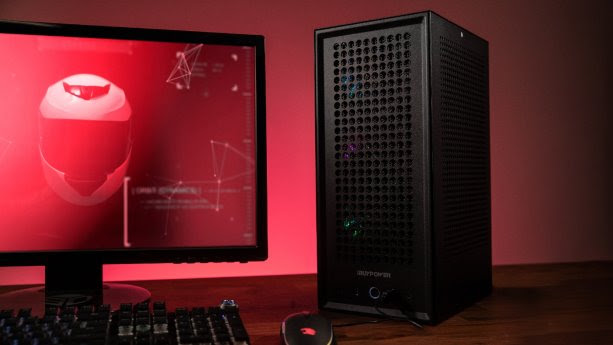 The small form factor (SFF) Revolt 3 MK3 will be designed to support a wide variety of high-performance PC components. Enabled by its perforated panels, the natural layout of the 18.4-liter case creates three separate airflow zones, one for the CPU and motherboard, one for the power supply (PSU), and one for the graphics card (GPU), to mitigate the heat transfer between components. Users can mount up to a 280mm radiator to the hinged internal panel as well as an optional 80mm exhaust fan to the top of the Revolt to help promote better GPU thermals.

The Revolt 3 MK3 will come equipped with a 700W 80 Plus Gold SFX-L PSU installed and cables pre-routed for easy assembly and internal cable management. All system I/Os will route under the case to a large cutout where plug-in ports can easily be accessed and unsightly external cables can be managed and kept out of sight. With the ability to remove every exterior panel and keeping with the signature competition focused features originally introduced with iBUYPOWER’s Revolt 2, users will be able to access and easily upgrade or swap the graphics card and storage devices without having to remove any other components or adjust cabling.

With no shortage of connectivity, the Revolt 3 MK3 will provide support for three USB 3.2 ports on the front I/O. Two Type-A ports will be routed internally to connect to the motherboard’s Gen 1 header and a Type-C port pass through will connect to the motherboard’s rear I/O. For portability and convenience, an included carrying handle is built into the top of the case, sitting flush with the top panel as to not disrupt the clean lines, but pops up with a push. In addition, pop-out holders on both sides of the case give users a place to hang their headset or other accessories when not in use.

Standing vertically, the Revolt 3 MK3 will feature a modern design with black and white color options and a contrasting, swappable, colored mesh inlay behind the front panel to allow for customization.

The Revolt 3 MK3 is expected to be available for purchase at the end of Q2, 2021 as part of an iBUYPOWER system or a standalone case.

For more information on the Revolt 3 MK3, please visit: ibuypower.com/ces-2021

Since 1999, iBUYPOWER has embodied its core beliefs of Perseverance, Unity, Strength, and Ambition, to deliver on its promise to build the best gaming systems for the most discerning gamers. Even in a time when PCs were not as ubiquitous as they are today, we fueled the passion for gaming by giving our customers the highest quality in custom built computers. Our systems have since become the backbone for professional gamers, game developers, LAN centers, major esports tournaments, collegiate esports, and everyday consumers. iBUYPOWER has worked intimately with brands such as Intel, NVIDIA, AMD, Microsoft, WD, ASUS, Bethesda, MLG and many more. Superior performance, reliability, cutting edge technology and timely production make iBUYPOWER the authority in PC gaming.

We have 1064 guests and one member online