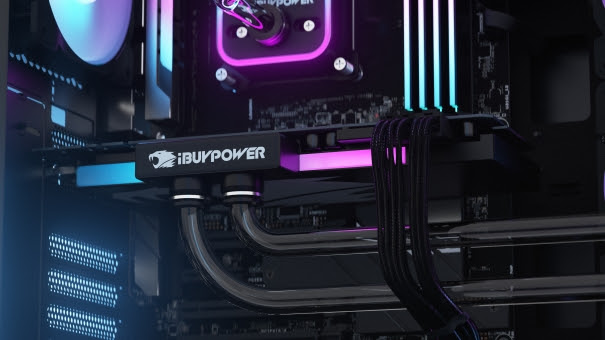 Released in late 2020, iBUYPOWER’s Element CL liquid cooled gaming PCs feature a robust cooling system with an integrated front panel distribution plate and custom push-to-connect fittings designed to withstand the turbulent nature of shipping and minimize build times. With a custom addressable RGB (ARGB) water block for both the GPU and CPU, the Element CL delivered the performance and aesthetic customers look for in a liquid cooled PC in a more affordable package.

The new Element CL Pro will be the next addition to iBUYPOWER’s Signature Element CL line of systems. Maintaining the key features of the Element CL such as the distribution plate, custom tubing and fittings, and the custom ARGB GPU and CPU water blocks the Pro will feature a new GPU water block to provide support for the new RTX 3070 and 3080 GPUs.

To enable better airflow in the Element CL and offset the higher heat dissipation of the 30 series cards, iBUYPOWER will provide four new 120mm fans. Three of the new fans will be mounted to the included 360mm radiator located next to the motherboard and over an exhaust vent while the fourth is mounted at the rear for exhaust. The new design will feature swept blades for higher static pressure and will be PWM controlled.

For early adopters of the Element CL hardline liquid cooled system, iBUYPOWER plans to develop an upgrade kit for users wanting to enhance system performance with the new 30 series of GPUs. The kit will come with the new Element CL Pro GPU water block and the four new 120mm fans.

IBUYPOWER's Element CL Pro systems with 30 series support are expected to be available for purchase in March 2021.

Since 1999, iBUYPOWER has embodied its core beliefs of Perseverance, Unity, Strength, and Ambition, to deliver on its promise to build the best gaming systems for the most discerning gamers. Even in a time when PCs were not as ubiquitous as they are today, we fueled the passion for gaming by giving our customers the highest quality in custom built computers. Our systems have since become the backbone for professional gamers, game developers, LAN centers, major esports tournaments, collegiate esports, and everyday consumers. iBUYPOWER has worked intimately with brands such as Intel, NVIDIA, AMD, Microsoft, WD, ASUS, Bethesda, MLG and many more. Superior performance, reliability, cutting edge technology and timely production make iBUYPOWER the authority in PC gaming.

We have 1239 guests and one member online