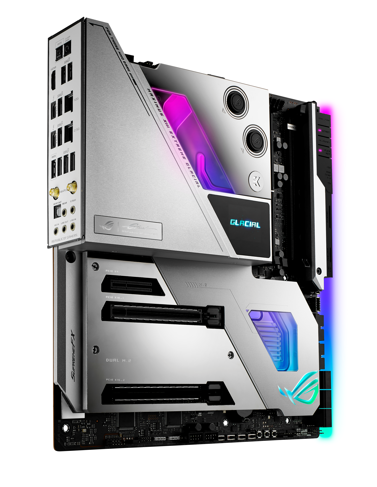 In addition, ASUS will be releasing a wide range of Intel 500-series boards based on the H570, B560 and H510 chipsets. For more information on these products, please refer to the ASUS Edge Up content hub and the dedicated Intel 500-series information center. Upcoming firmware updates will also enable ASUS 400-series motherboards to support the latest 11th Gen Core processors. These updates will be announced in due course on the Intel 400-series family information page.

More Power Meets a Big Chill
The ROG Maximus XIII, ROG Strix, and TUF Gaming boards all use our VRM heatsink design to keep these many-phase VRMs cool. ROG Maximus XIII and ROG Strix boards employ individual high-surface-area heatsinks built atop wide heatpipes for highly effective thermal transfer from the circuitry beneath, while the TUF Gaming Z590-Plus WiFi uses large discrete heatsinks. On all of these enthusiast-friendly motherboards, our latest VRM cooling approach transforms the I/O shroud from a primarily cosmetic polymer element to a massive alloy shroud that’s fully integrated with the rest of the motherboard cooling system for lower VRM temperatures than ever. Our Prime Z590 motherboards also stand ready for 11th Gen Core CPUs with expanded VRM heatsinks covering all of their power-delivery circuitry.

Next-Gen Inside and Out

Speed isn’t optional in a next-generation system. On top of the PCIe 4.0 support offered by 11th Gen Intel Core CPUs, all of our ROG Maximus XIII Z590 motherboards offer up to two onboard Thunderbolt 4 USB Type-C ports. This standard offers up to 40Gbps of bandwidth over cables up to two meters in length, in addition to full support for the next-generation USB4 protocol.

A new generation of Wi-Fi is right around the corner, too. 6GHz spectrum, allocated for Wi-Fi by the United States Federal Communications Commission, opens up a vast new frontier of prime wireless networking airspace. Once Wi-Fi 6E devices are approved for operation by regulatory bodies, you’ll want your next PC to be ready from day one.

Software Smarts Do All the Hard Work for You
Powerful hardware needs intelligent software to unleash its full potential, and we’re constantly on the lookout for ways that we can improve or refine your experience with clever software tools. Our suite of exclusive AI-powered technologies returns on the Z590 platform to maximize your system’s performance with minimal effort.

AI Overclocking, powered by exhaustive research and characterization of the performance potential of thousands of actual CPUs in our testing labs, continues to lead the industry for overclocking performance and ease of use. It boosts CPU clocks for both lightly-threaded and all-core workloads with just one click.

Two-way AI Noise Cancelation removes distracting background noise from both your microphone and from other audio sources, ensuring you can hear and be heard with crystal clarity in games and group chats. AI Cooling integrates information about your system’s fans and component temperatures to automatically achieve the best balance between cooling performance and noise levels. And AI Networking draws on an extensive database of application profiles and a view of your current network activities to ensure that the right traffic always gets priority.

We have 1153 guests and one member online