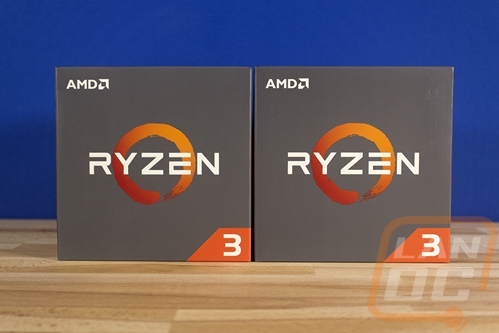 The Ryzen 5 launch was a lot better for budget minded gamers but all eyes have been on the Ryzen 3 launch to see if AMD is going to pull off the hat trick. Plus AMD has traditionally been the perfect company to go with when doing gaming PCs on a small budget. While the Ryzen 5 CPUs are great, they don’t really help with those builds. Today is the official launch day for Ryzen 3 and I’ve spent the last few weeks testing and playing around with it. I’m excited to give a quick run down on the details then dive into the performance numbers to see how it performs.

AM4 Testbench also supported by: Corsair, Asus, and Noctua

Okay before I jump into testing we do need to recap a little. With Ryzen 7 and Ryzen 5 already launched we have learned a few things about AMD's naming. For starters, the 7,5, and 3 setup is similar to Intel's I series but AMD hasn’t set hard limits like Intel did. So for example with Intel i7’s are the only CPUs with hyper threading and both i7 and i5’s all have quad cores, then i3’s are the cheaper dual cores. AMD tossed all of that out and we have all 8 cores for the R7’s and then for R5’s they have 4 and 6 core SKUs and all of those have twice the number of threads to cores. But with R3 AMD dropped the additional threads but stuck with the core counts so both the 1300X and the 1200 have four cores. This should make things especially interesting next to Intel's i3’s with their dual cores. 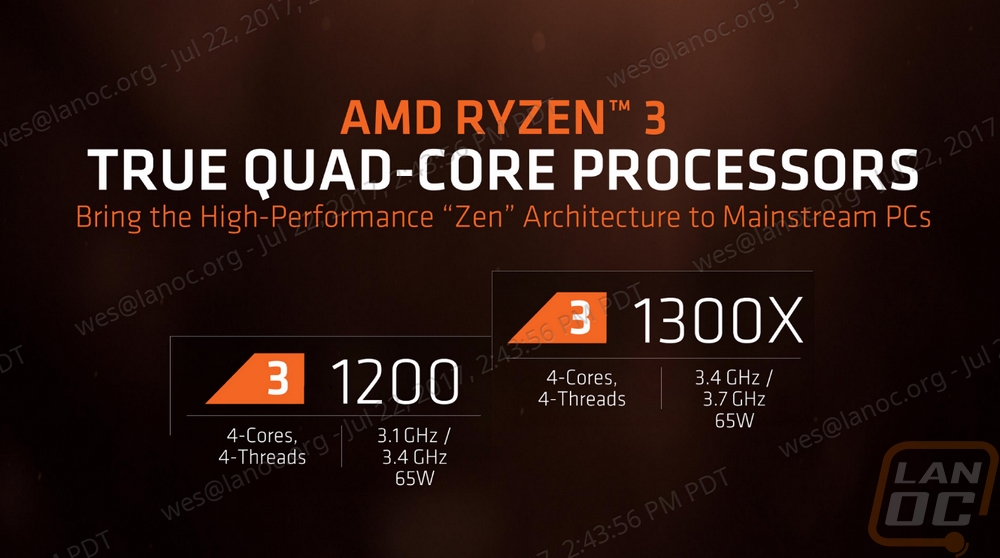 The other thing we have learned is with Intel the K designation means the SKU is overclockable and then X means it is a top tier SKU. AMD left all of their CPUs overclockable assuming the motherboard supports it and the X here means a higher XFR boost to the clock speeds. So the R7 X models get 100 MHz where the non-X models only get 50. R5’s were more confusing, the 6 core models all had 100 MHx XFR with the non-X 4 core having 50 and the 1500X getting a 200 MHz boost. So where does that leave the two new R3 SKUs? The 1300X gets that same 200 MHz boost and the 1200 gets the 50 MHz boost. 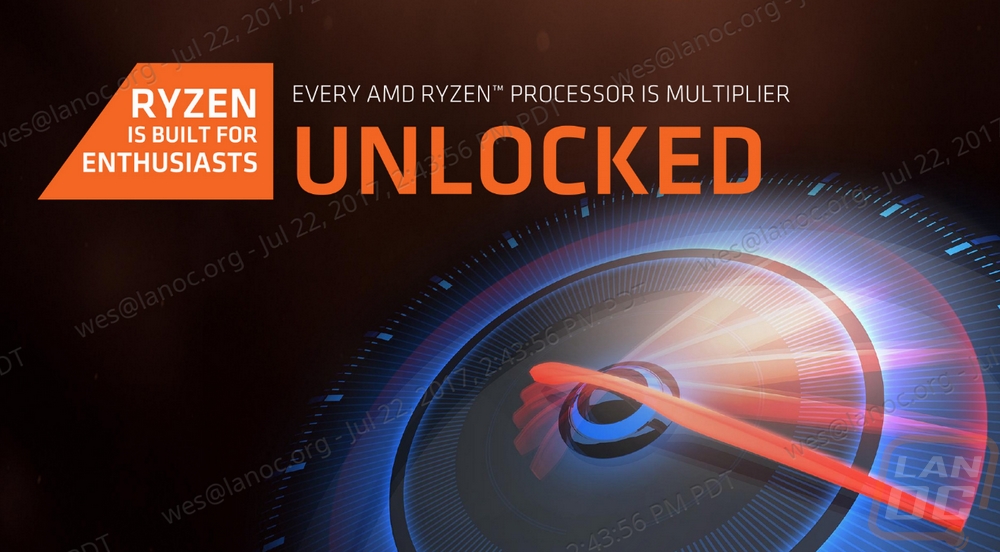 For coolers, both of the Ryzen 3 models come with the same Stealth cooler than the R5 1400 came with. It is a shorter version of the Spire and doesn’t have any fancy RGB lighting or anything like that. When on the call with AMD though they did also announce that they will finally be selling the Wraith MAX cooler. I suspect the hype on that cooler has died down a little now that we are this far past the launch and there are finally other AM4 options around but it is a great cooler. I tested it back in April, check out the coverage. I will be doing a big Ryzen cooler test here on the website as well so keep an eye out for that one. I will include all of the coolers as well as a whole box of other coolers that I have waiting for me to get into once this coverage is up. 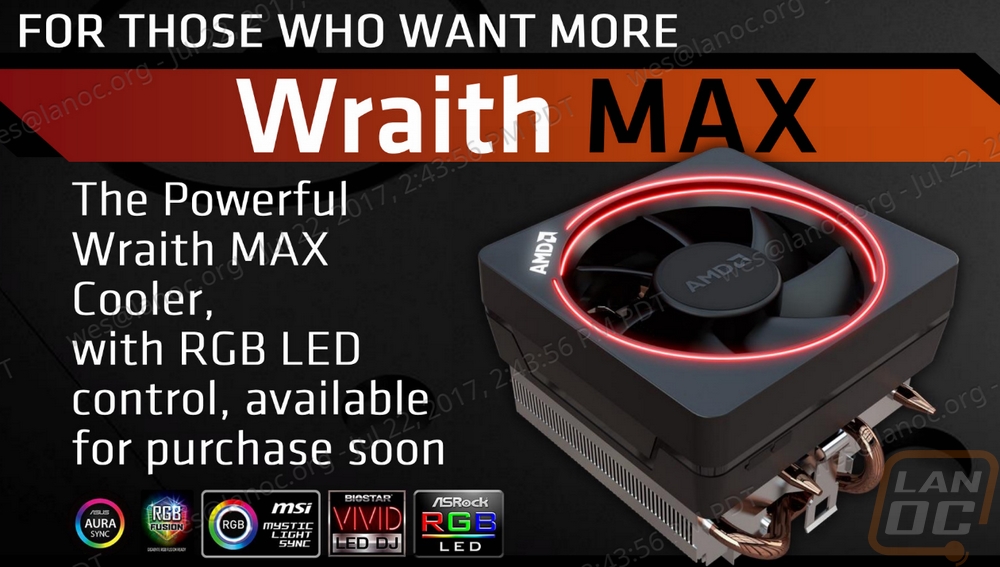 In addition to Ryzen 3, AMD is quietly also introducing new A series APUs for the AM4 platform. Before you get too excited, none of these are Ryzen based. The idea here is to bring updated SKUs using a little older architecture to start getting APU options out on the market. This finally will put those display connections we have been seeing on AM4 boards to use with the on board video. Hopefully, we can take a look at some of them later. I’m mostly excited as they will also be a great way to build a cheap AM4 system that you can upgrade to Ryzen and a dedicated GPU later on. 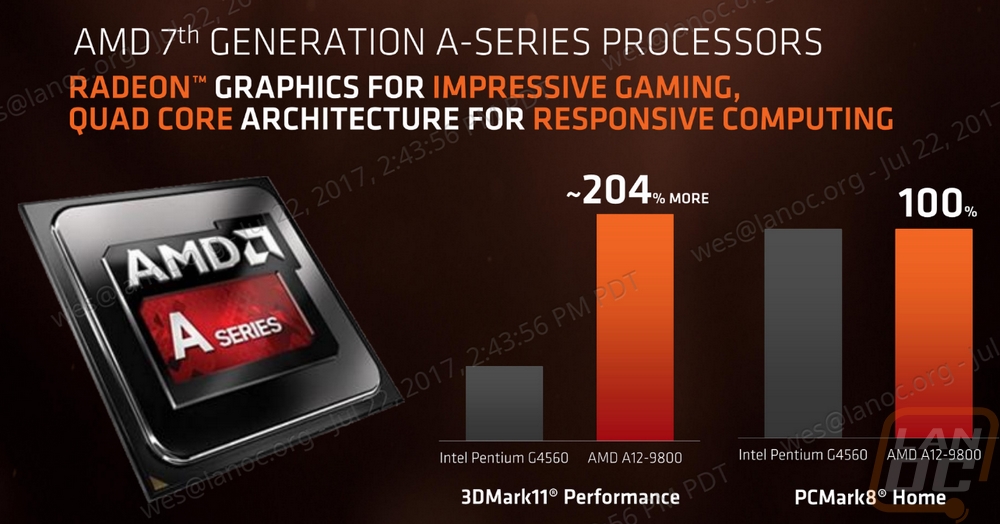 To me, that is one of the most exciting things about AM4 as a whole. It covers a wide range of hardware allowing people true upgrade paths were Intel's current setup doesn’t allow for big upgrades in the future on the mainstream CPUs and the buy in for the X299 platform is far too high to consider it a budget build in the first place. Right now we have the X370 chipset for enthusiast builds, B350 for mainstream, and the A320 chipset is starting to trickle out as well for cheaper builds. A320 still has some of the features but drops overclocking and like B350 doesn’t have dual PCIe Graphics capabilities. Not listed in the picture below are the two ITX based options. I asked AMD and they seem to be putting the ball in motherboard manufacturers hands saying that we should start to see more 300 based boards as the APUs start to come out and the need for smaller boards grows. I would argue that ITX AM4 options as a whole have been extremely in demand and impossible to get up until recently where on Intel platforms you can normally get ITX options at launch or at least close to it. I really hope ITX opens up more soon.

I also snapped pictures of the two CPUs that came in for this launch. I’ve already covered just about everything about them and the cooler. But here is the packaging. 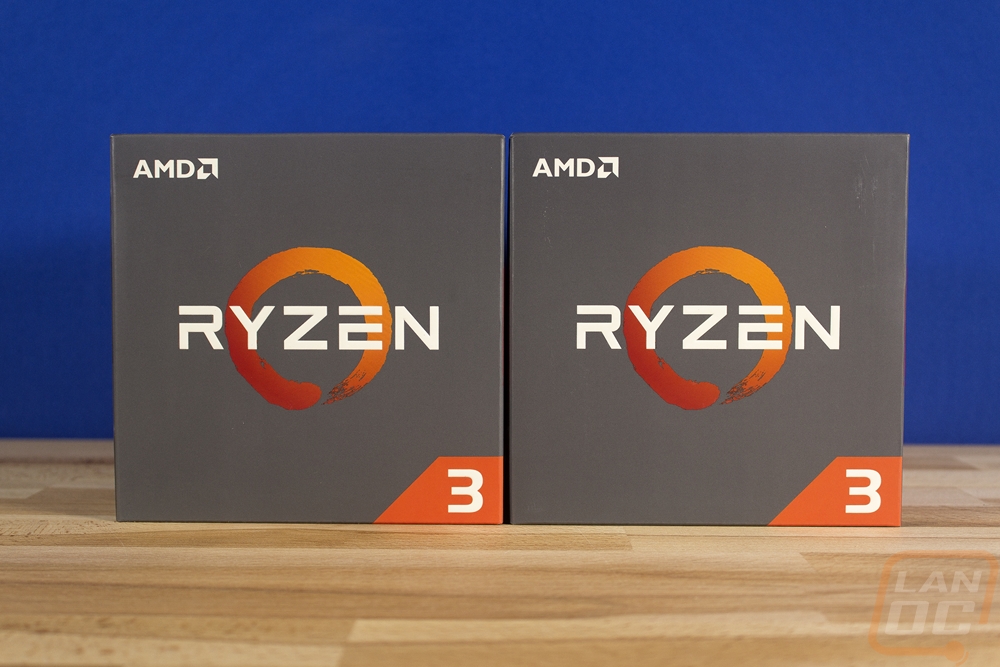 Inside the box, you get a plastic tray with the CPU and a Ryzen 3 sticker. Both of the CPUs have the same look going as Ryzen 5 and Ryzen 7. You get that cool looking Ryzen logo on top and the old school pins on the CPU that some people love and others hate. 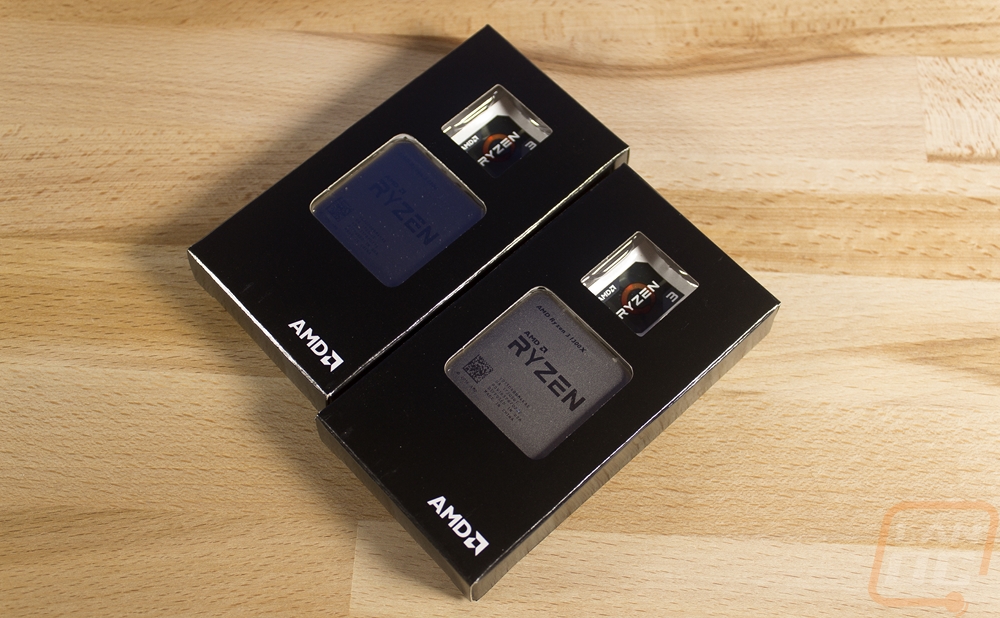 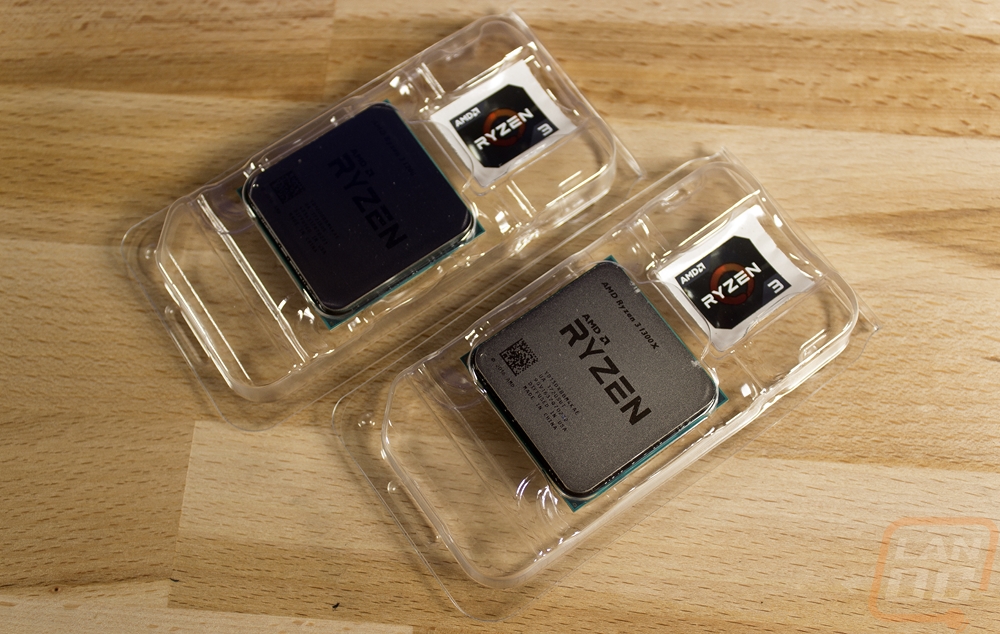 The stealth cooler is a short aluminum based cooler. The top fan looks just like the Spire cooler only without the RGB lighting. It does have the AMD logo up on top and on the center of the fan. The fan is as thick or thicker than the heatsink and it should be an option for ITX or low profile builds. When flipped upside down we can see it does come with thermal paste pre-applied and the heatsink Is aluminum all the way to the contact area. I do love the screw based mounting that should be a lot easier to work with than the old school clips that the Wraith cooler still has. 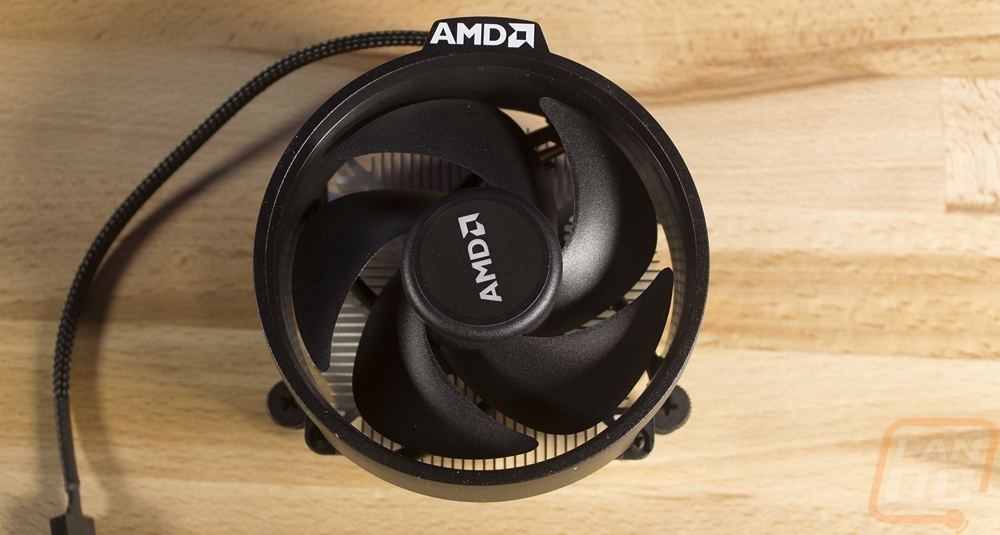 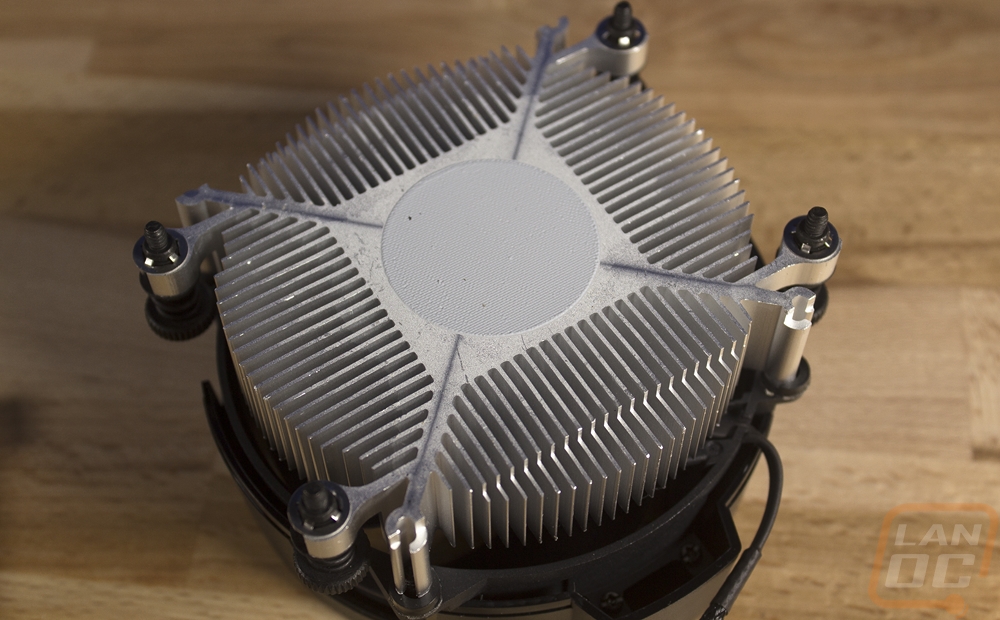 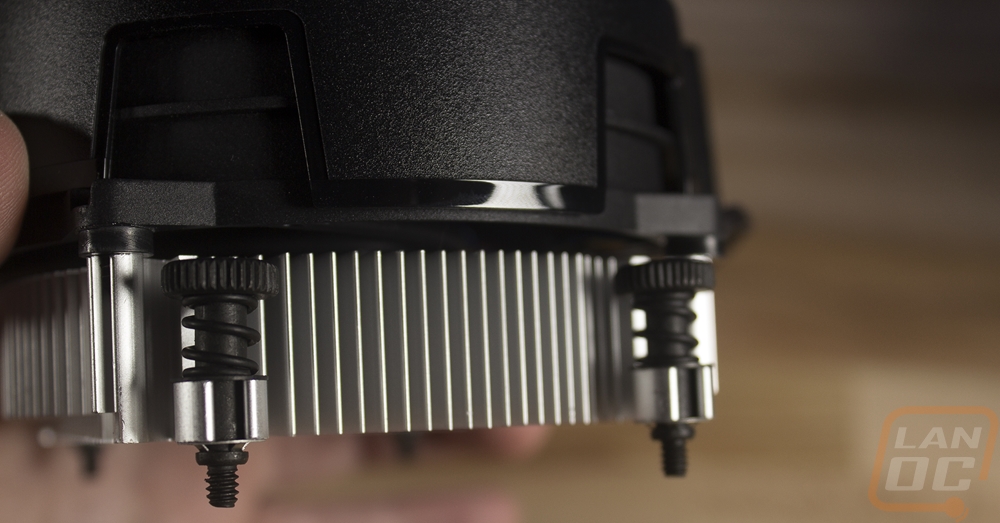 We have 1450 guests and one member online