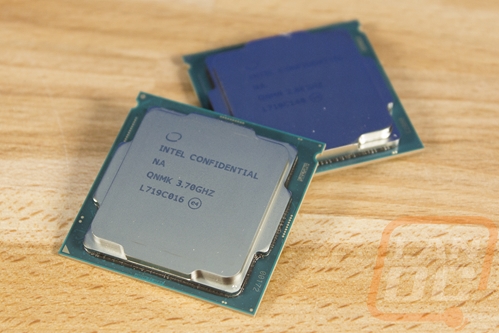 Its hard to believe considering we just finished up an Intel launch, but it is already time to check out Intel’s next launch. Kaby Lake was launched at the beginning of this year and the Mainstream lineup of CPUs is getting refreshed with Coffee Lake and Z370. This is the 8th generation of Intel’s Core processors going back to the original launch back in 2006. While I’m sure Kaby Lake owners aren’t going to be all that happy about the relatively early launch, but those who waited might be excited to find out that Intel has added cores to the mainstream lineup and is bumping up the entire product stack. As someone who is still building my wife’s Kaby Lake build, I completely understand the feeling. But as long as she never finds out her new PC is already out of date I will still be alive long enough to put the i7 and i5 CPUs that Intel sent over to the test.

As always, before diving into performance testing I like to step back and take a look at the launch as a whole. In this case, Intel is launching their new Coffee Lake CPUs that are part of their 8th generation of Core processors. In addition to being the second mainstream launch this year, they have also changed their launch process. Back in August, they introduced their Mobile U-Series CPUs to start things off. Today we have K SKU and premium consumer processor then according to Intel in the first half of 2018 we will see the commercial and broad consumer processors. 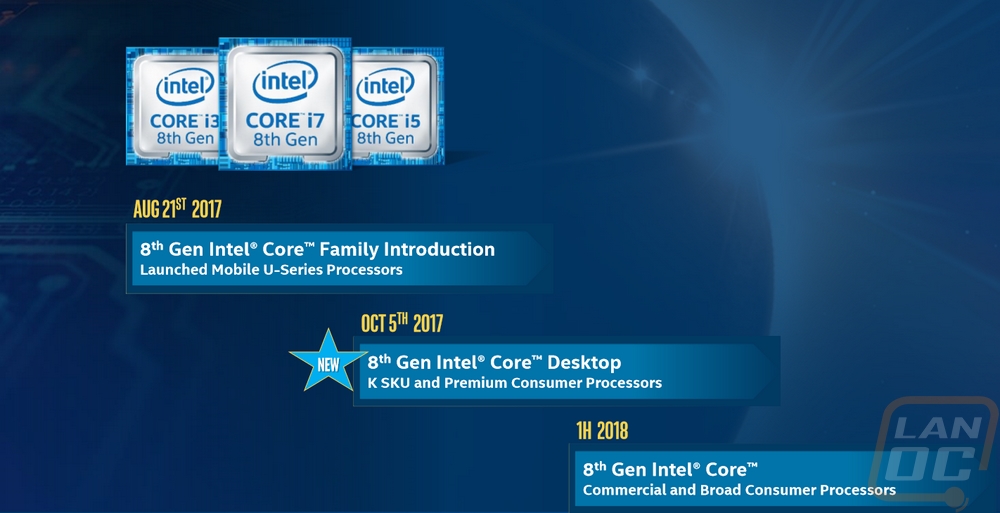 So what exactly is a “premium consumer processor” well here is the breakdown of what is launching today. Obviously, a lot of the focus is going to be on the i7-8700K as it is the new flagship for Intel’s mainstream lineup. The biggest change is the move to 6 cores, the first time Intel has ever done this on their mainstream CPUs. What really caught my eye though was the 8700K and 8700 not being the same CPU with just overclocking unlocked like a normal K designation gets you. The K now gets you an additional .5 GHz on the baseclock, going from 3.2 to 3.7 and .1 on the boost clock going from 4.6 to 4.7. Along with that, they bumped up the TDP from 65 to 95. Both 8700’s have 12MB of cache and dual-channel 2666MHz support. Speaking of memory, Intel has bumped up their memory support in both the i5 and i7 CPUs to 2666MHz, in the past this was 2400MHz and 2666MHz was considered an overclock. 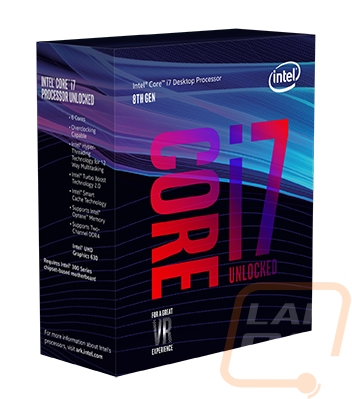 Moving down the lineup things are different across the board. For years now it has been 4 cores 8 threads on i7, no hyperthreading but 4 cores on i5’s and 2 cores with i3’s. Now for i5, they have bumped things up to 6 cores but we still don’t have hyperthreading then for the two i3 SKUs they get 4 cores no hyperthreading. This is a big improvement all the way down to the bottom of the stack and is no doubt in part by increased competition from AMD. The standard 4 cores 8 thread is missing from the lineup but I think this is because it is hard to fit that setup without it competing with CPUs higher than it. Would you put it below the i5’s and have 8 threads on the low end and 6 threads on the high-end i5? 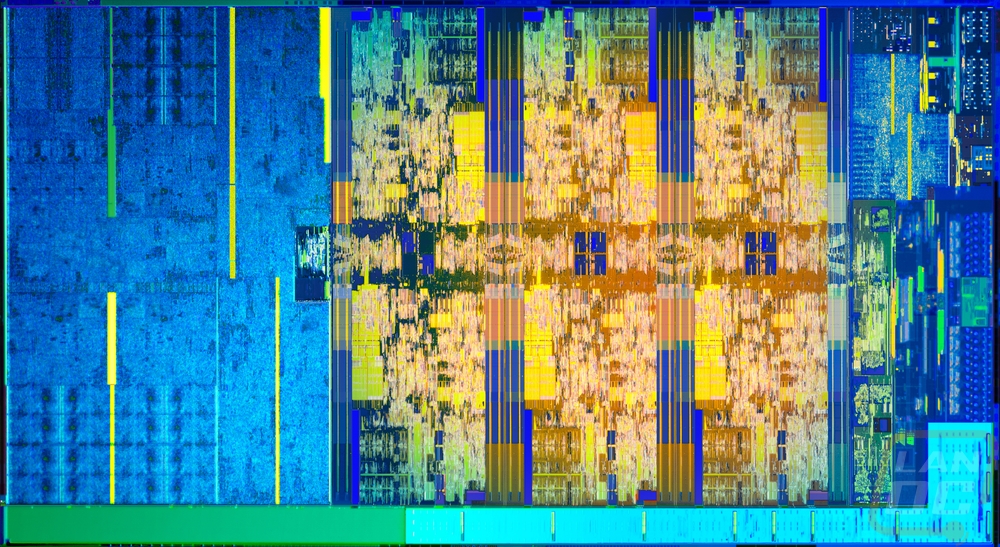 For i5 Intel has different name designations that help split the two SKUs apart more than on the 8700k and 8700. The 8600K is unlocked and while they both have the same 6 cores 6 thread and 9MB of cache they are separated by clock speeds with the 8600K sitting at 3.6 base and 4.3 boost with a 65-watt TDP. The i3’s are interesting in that they drop the turbo boost all together but they did at least go with good base clocks. The i3-8350K (what an odd model name) is overclockable though and has a 91-watt TDP so that should be a good buy for those who don’t need additional core but can edge out extra performance from overclocking.

So beyond the changes to the number of cores, clock speeds, and the overall revamp of the i3/i5/i7 system what else is different with Coffee Lake? Well, I was surprised to see Intel put such a big focus on overclocking this time around. They have made changes to what can be controlled including real-time memory latency control, per core overclocking, and they extended the range on things like memory ratios, and PLL trim controls. 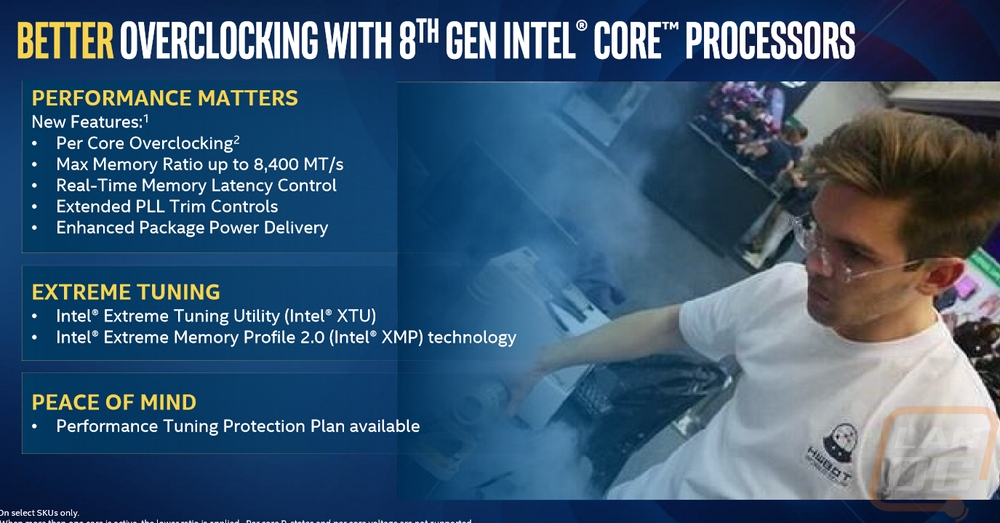 The other half of this launch is that along with the new CPUs Intel is introducing the new Z370 chipset and this is the area that people are going to be a little upset. Specifically, because Z370 and Z270 that launched earlier this year both still share the same LGA 1151 socket. In the past, with situations like this they at least made changes to the alignment notches but that didn’t happen this time. So you can put a Kaby Lake CPU in Z370 and physically it will fit, the same goes for Coffee Lake into Z270, but neither will work. With the move to 6 cores, Intel did have to change power delivery, that isn’t too big of a surprise. While making those changes they also changed memory routing to up the sorry for DDR4-2666MHz. So with that, I completely get why you couldn’t run one of the new 6 core CPUs in Z270. But what about running Kaby Lake in Z370? Well while on a call with Intel they just said they did that to avoid confusion. Personally I’m not a fan of that at all, being able to potentially pick up a Z370 board now to open up the upgrade to a 6 core CPU later would have been really nice. It would also leave more replacement options later if a Z270 board dies, finding out of production motherboards to repair a dead PC gets really hard or expensive. 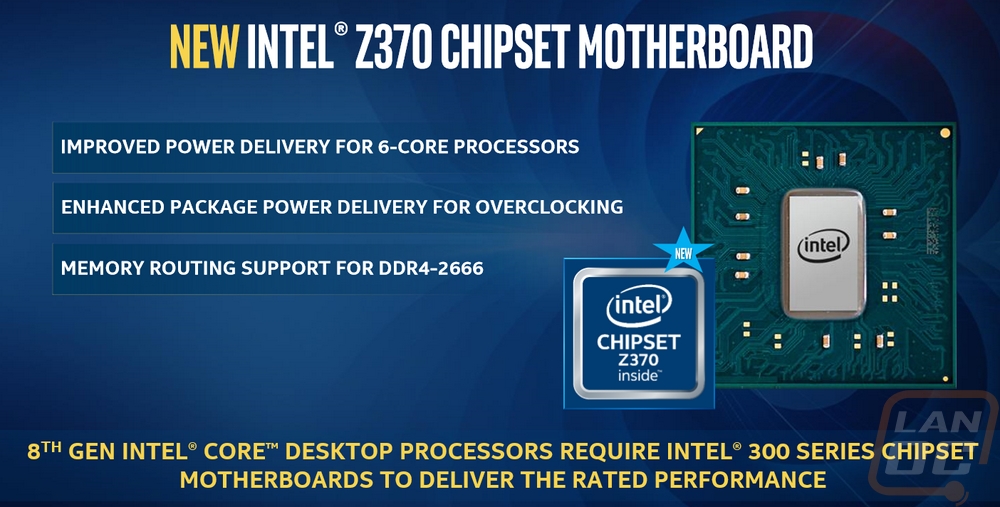 Overall the new platform does still have everything that Z270 had to offer so you can expect to see boards with USB 3.1 Gen 1 and Thunderbolt. Intel Optane support is included again and they are pushing that even harder this time even going as far to list support for each CPU on the CPU specification listing earlier and including an Optane module with all of the CPUs sampled to the press. 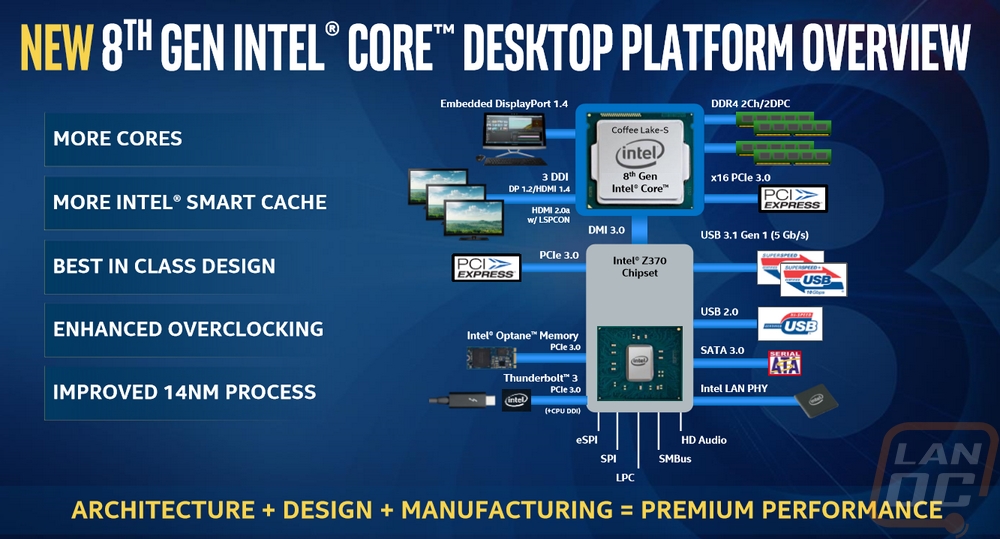 Speaking of what was sampled to the press, this is what they sent over (Optane module wasn't pictured though). They sent two CPUs, the i7-8700K flagship CPU along with the new 6 core i5-8400. 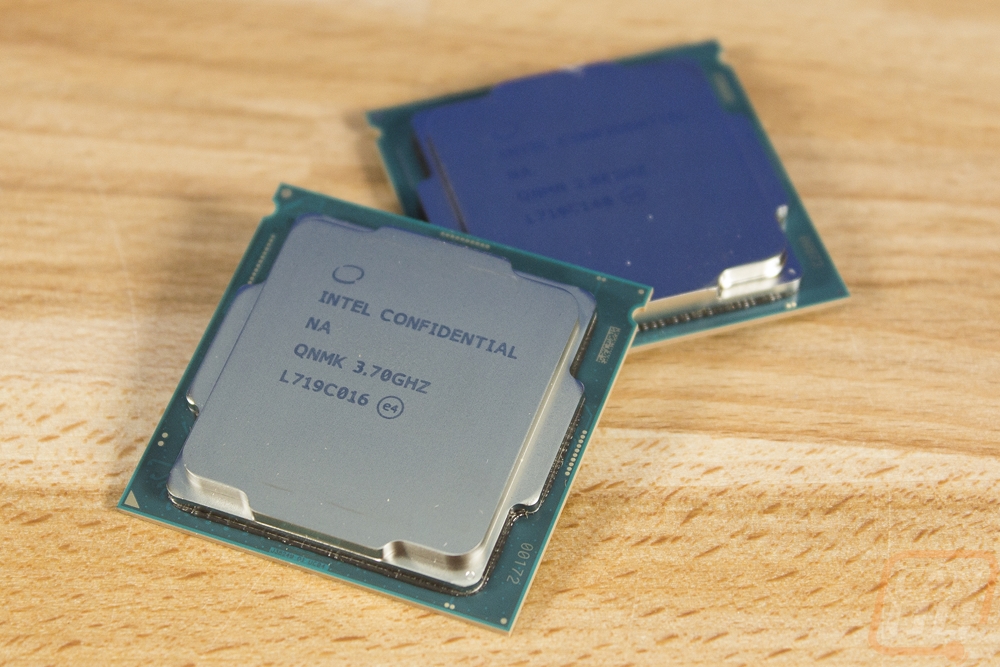 After those came in a second package also came in from them with a little gift. As I like to be completely open about anything being provided to us this is what they sent. Inside the box, they tied in the Coffee from Coffee Lake with a bag of Intel Coffee and a really nice Intel mug that can be drawn on with chalk. They also slipped in the chalk, not that I have time to draw on it right now lol. 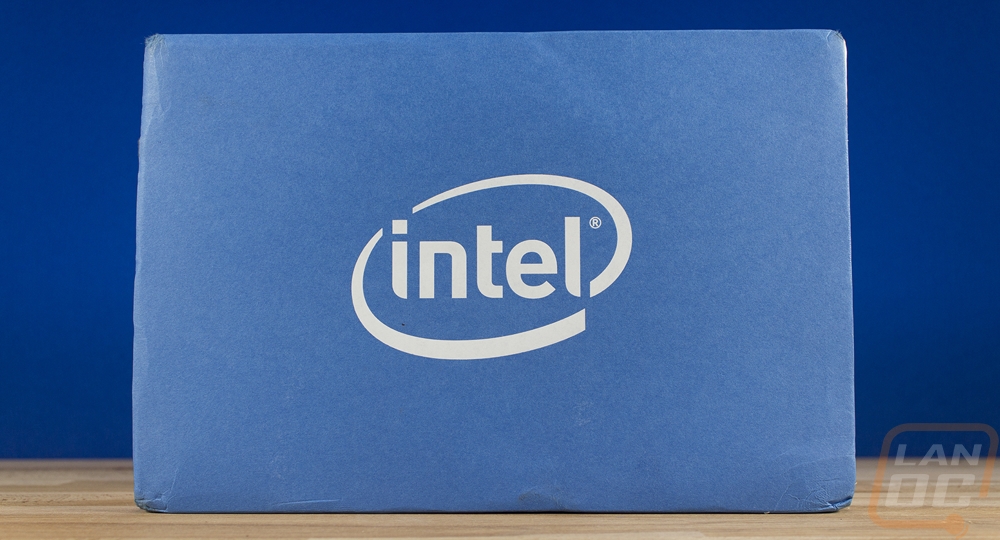 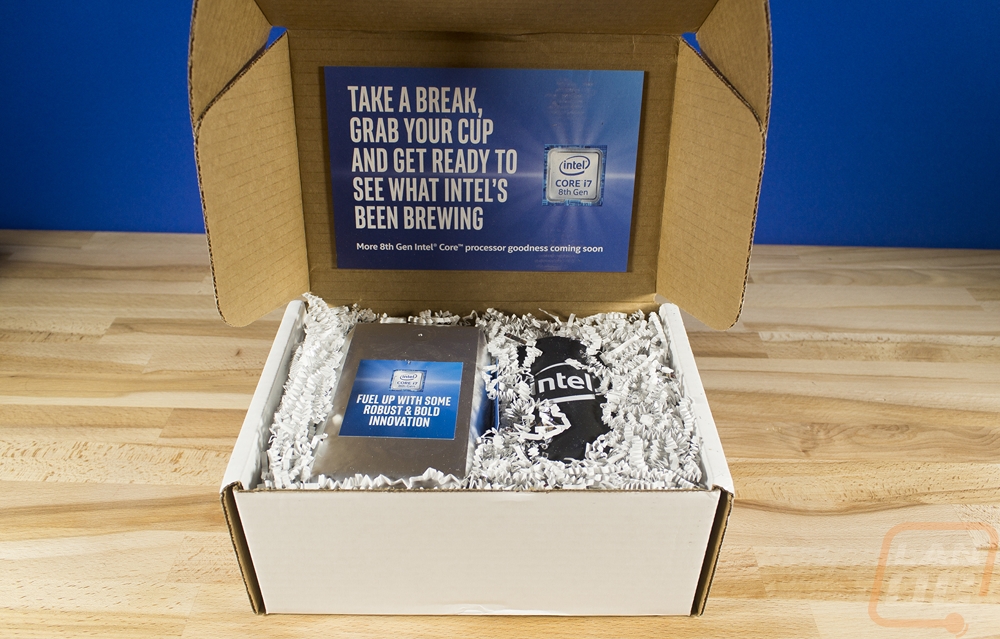 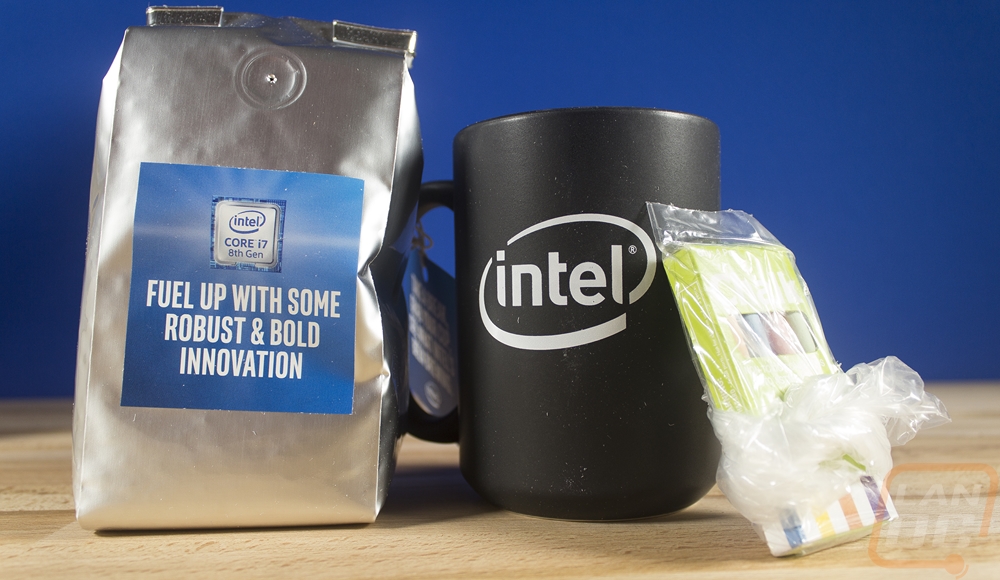 We have 998 guests and one member online