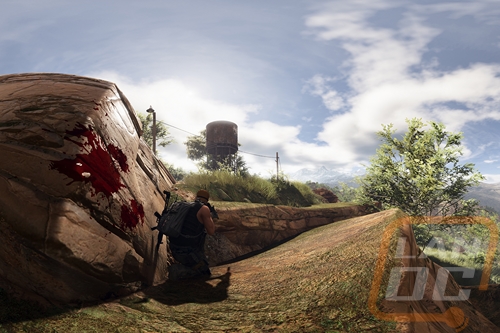 Okay on to the results, well kind of. The game is nice enough to actually show the amount of vRAM being used when doing the benchmarks so I did make sure to document each of them. At 1440p with ultra settings, it peaked at 4985MB but for the most part, anything under ultra shouldn’t run into limitations with any card with 3 or more gigs of vRAM.

I tested 4 out of the five quality settings and with those I did get a few images as well for comparison. These have been compressed and are far too small to see the details but they do give a general idea of the differences. You can see the most difference in shadows, the grass, and especially over on the left with the trees/mountain/sky in the distance. 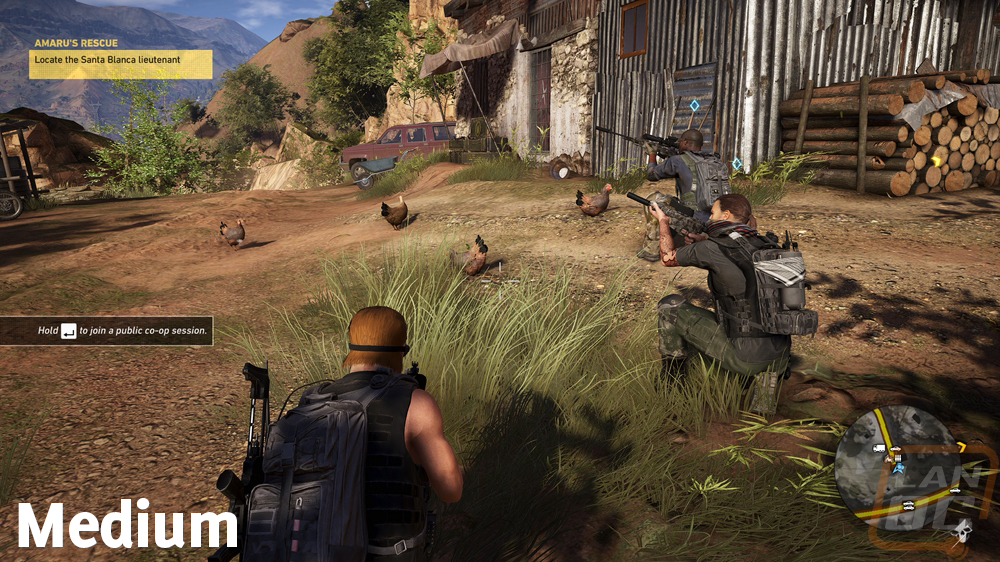 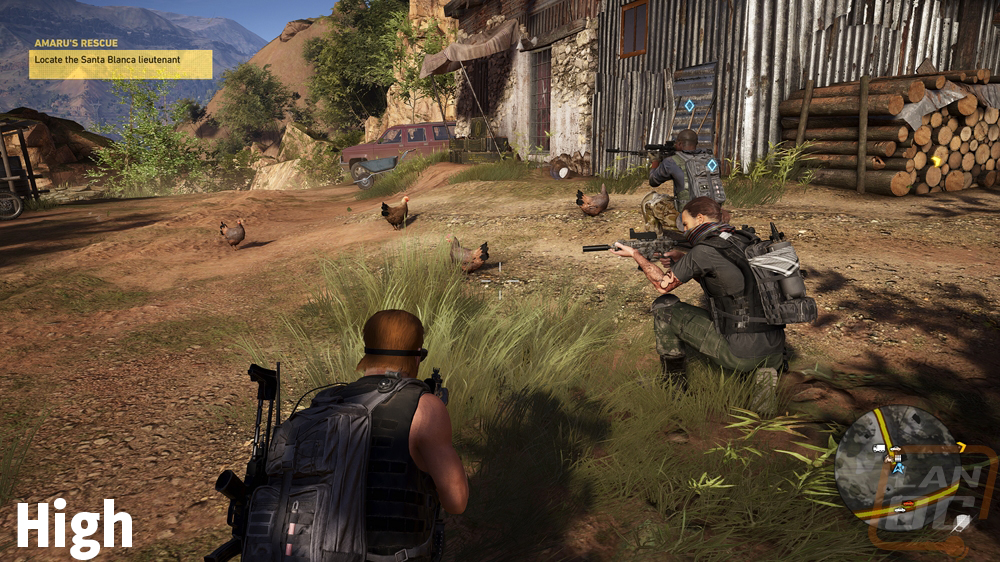 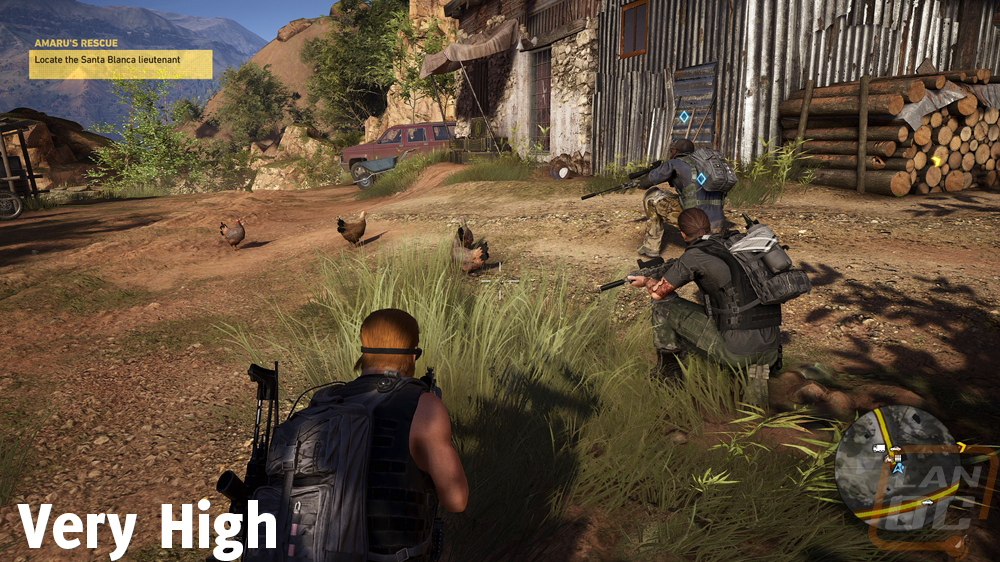 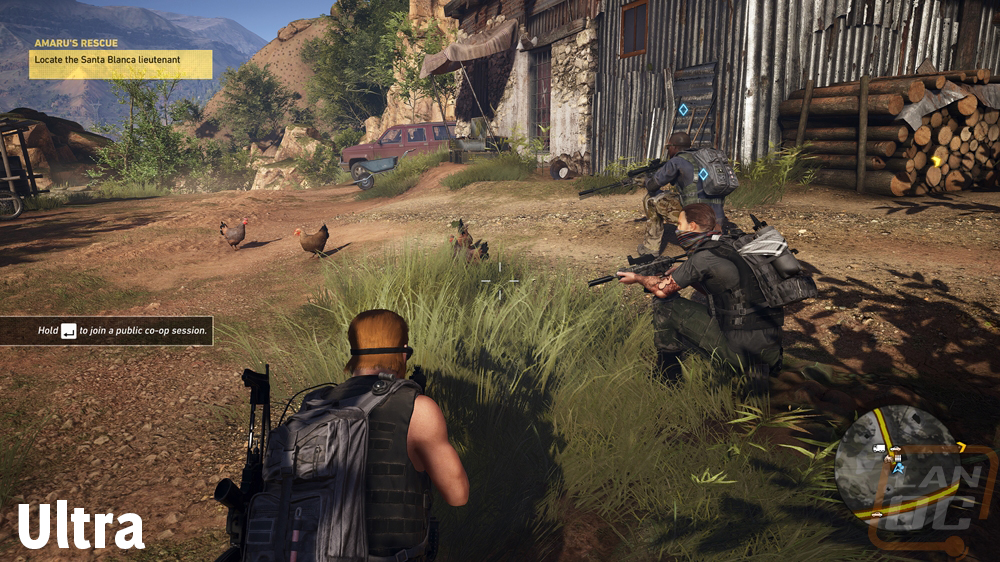 With all of that out of the way lets finally take a look at the performance numbers that I saw starting with testing done at 1440p. I grabbed one of each higher end card for testing as this is a demanding game. This is why I ended up with more Nvidia cards, until AMD releases Vega the RX480 is their highest available card. I also grabbed the RX470 to add a little more AMD in the mix even though it was a little lower end that I had intended to test at (cutoff around 1060/480). At 1440p Wildlands really pushed all of the cards when I tested at Ultra and my second Ultra test with Turf turned off. At this resolution, I would really only recommend pushing Ultra with the 1080Ti. Very High was comfortable on the 1080 and the 1070. None of the cards were really ideal for the High setting, they either performed better of needed to drop down to medium at this resolution. The RX 470 wasn’t ideal in any of the tests at 1440p, but that wasn’t a big surprise.

Testing at 1080p was a lot easier. Ultra was playable on the 1080 Ti and the 1080 this time around, you could almost even do it on the GTX 1070. Very high was good for just about every card with the exception of the RX 470 that I would set to High. At this resolution, you could even start running some of the settings like High on the 1080 Ti at 120hz+ refresh rates for even smoother gameplay. Given 1080p is still the most popular resolution the game looks very playable at high settings with any of the midrange and up GPUs. Given how good the game looks this is great news!

So I set out specifically to take a look at the AMD vs Nvidia performance to make sure the game doesn’t favor one over the other by too much. We already know that there are games that favor one manufacturer over the other, this isn’t anything new but it is important to know and to make sure we always have a good mix in our testing. In this case, Wildlands does favor Nvidia, especially at 1080p where we see the GTX 1060 pull ahead of the RX 480 by a noticeable amount but this does still seem to be a game optimized for both platforms. Both Nvidia and AMD released drivers specifically for the game and it has apparently made a big difference in performance from the beta or so I’m told. As for the turf or no turf testing, the benchmark doesn’t really spend too much time rolling around in the grass to potentially cause big performance gaps so both Nvidia and AMD cards did see a performance jump when turning Turf off so I don’t think that is going to be a major issue for us in future testing.

We have 1165 guests and one member online