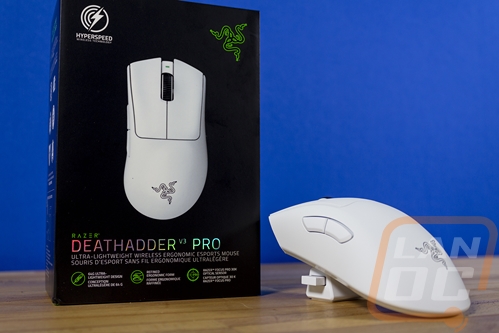 To start off my testing I did need to get the Deathadder V3 Pro installed and with that setup its software to get things confirmed. Just plugging the mouse in I received a prompt asking if I wanted to install Razers software. This congratulated me on the new mouse and let me pick from their software list which software to install. I went with just the basic Razer Synapse and I didn’t need any of the modules but if you plan on recording macros you will need that or if you want to tie your lighting in with other things there are different modules for each. 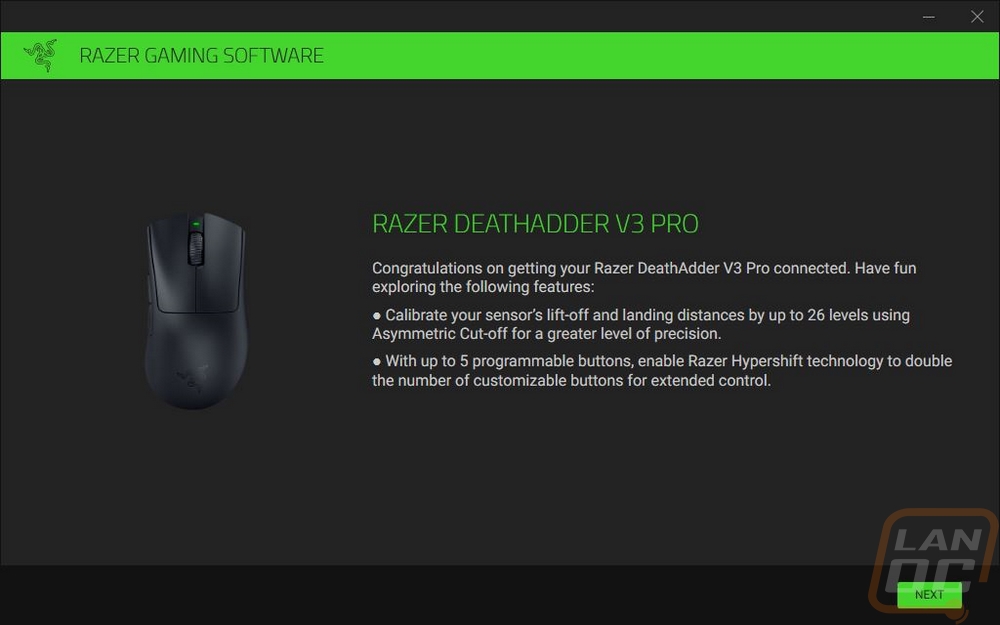 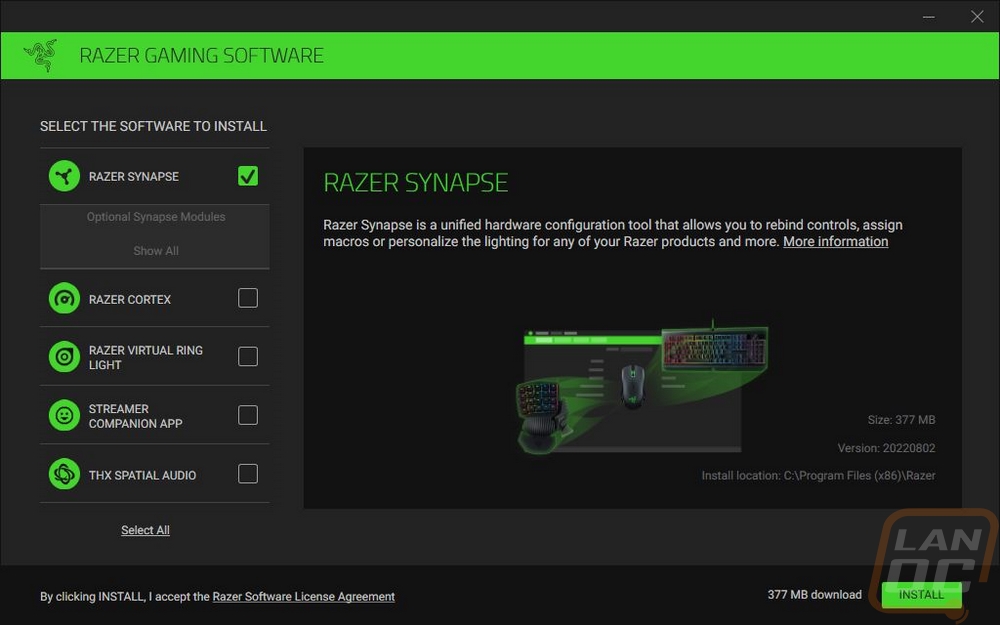 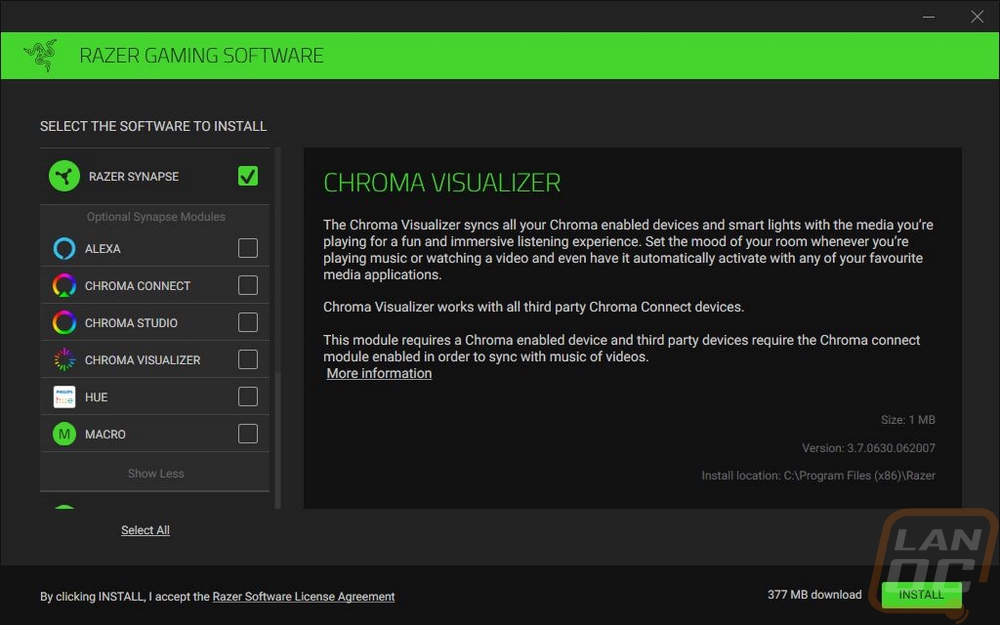 Once the software is installed you will get a popup asking you to sign up or log in to Synapse software which you can do with Facebook, Google, or Twitch as well. You also have the option to continue as a guest if you don’t want to create an account. I have an account but for these pictures, I was logged in as a guest. Once logged in as a guest you do get another popup reminding you that if you sign in you can back up your settings and access those settings from any PC. I should also point out that after this I did have to have Synapse check for updates because the brand new Deathadder V3 Pro didn’t show up the first time. 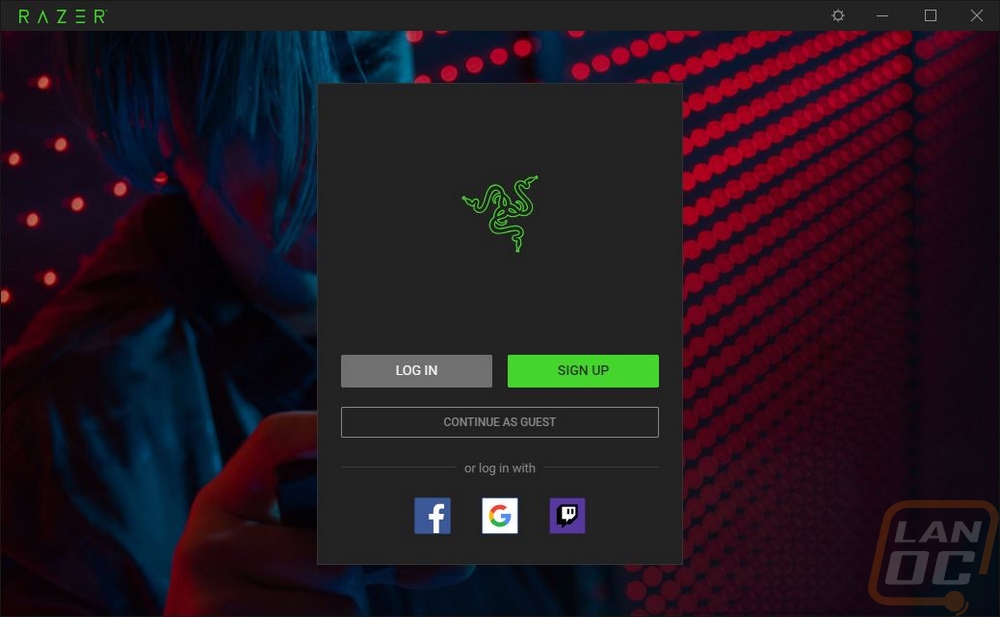 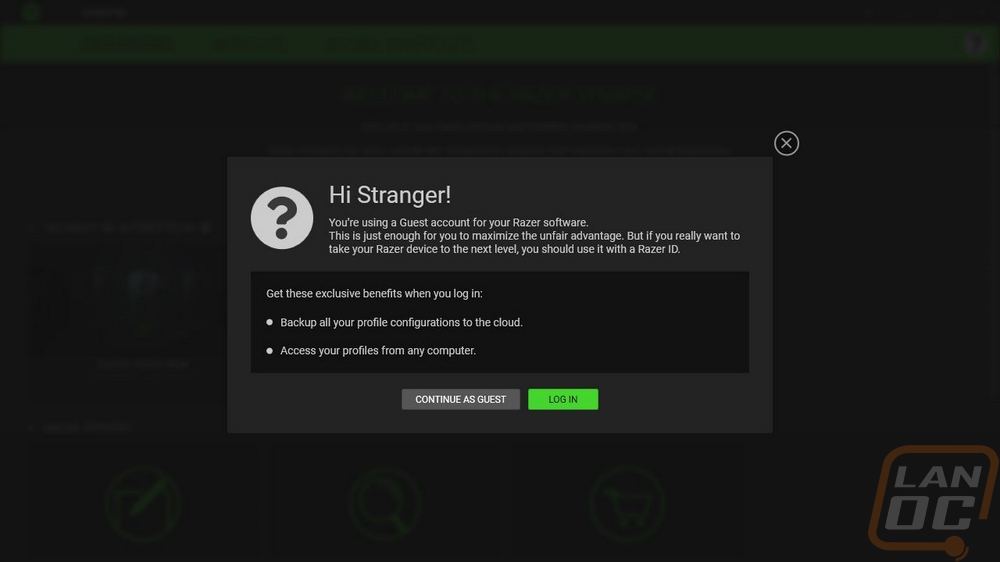 The main landing page for Razer Synapse has links up top for the main dashboard, your module page, and global shortcuts. The dashboard page will show all of the installed Razer devices and has links to things like the Razer store. I was surprised that the software recognized that we had the white version and gives us photos of the white model. 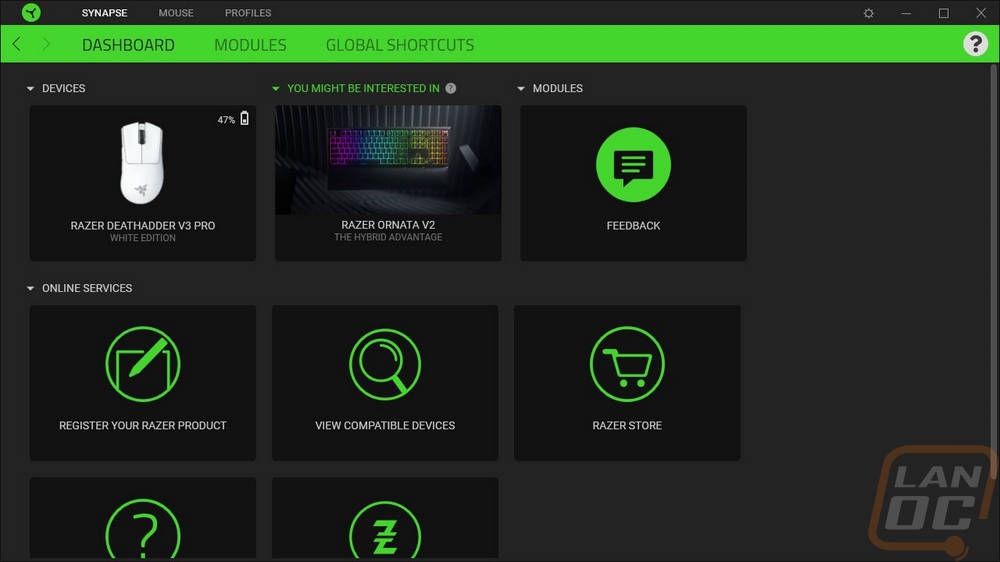 Clicking on the Deathadder V3 Pro you get the customize page which is where you program the buttons on the Deathadder V3 Pro. This page also had a picture of the mouse in the center which was white to match our mouse. It then has lines drawn to each of the programable buttons. Up top, you can pick from the profile, and down at the bottom, you can switch between standard mode and Hypershift mode which is like a function layer or your shift key that if you program a button to do it you can hold it and press other buttons to get more buttons to reprogram. Clicking on any of the buttons will give you a list on the left of all of the options you can program. You can do things like keyboard keys, launching programs, opening multimedia, windows shortcuts, changing mouse sensitivity, and anything else you might be able to think of and that is even before you include macros that you can record. 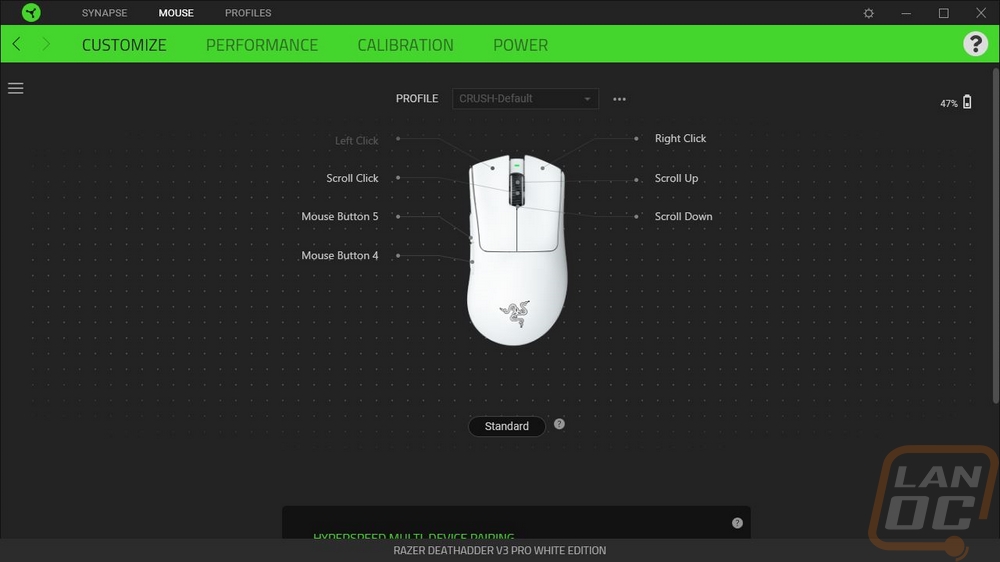 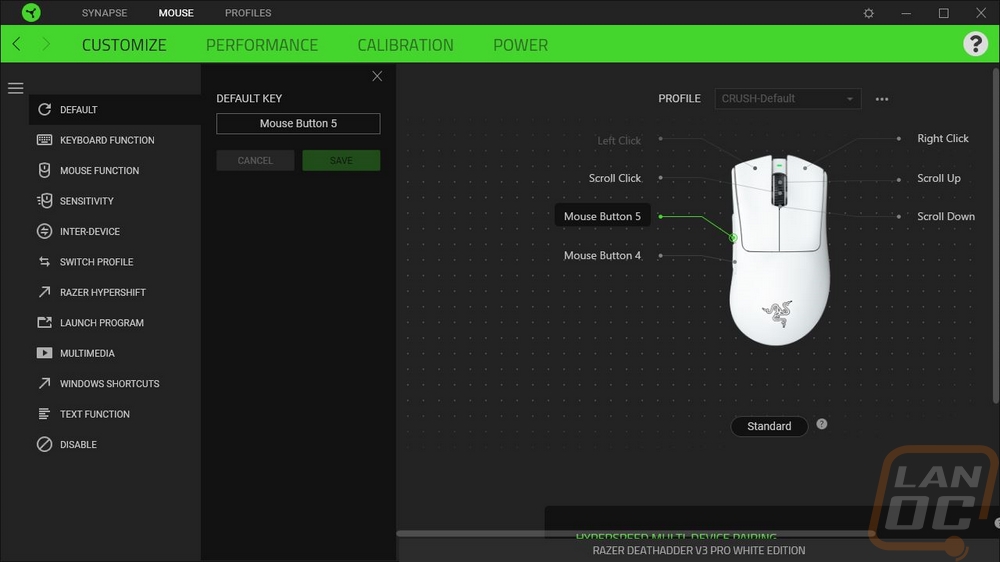 The next page is the performance page. This is where you can adjust your sensitivity settings. The Deathadder V3 Pro comes with five stages which you can set up what each stage runs at and use the bottom DPI button to switch between them. You can change the number of stages or for people like me who don’t like having more than one DPI you can turn it off and run just one. You can also change the polling rate here which with the default dongle maxes out at 1000 Hz and they also include a link to the windows mouse properties as well. 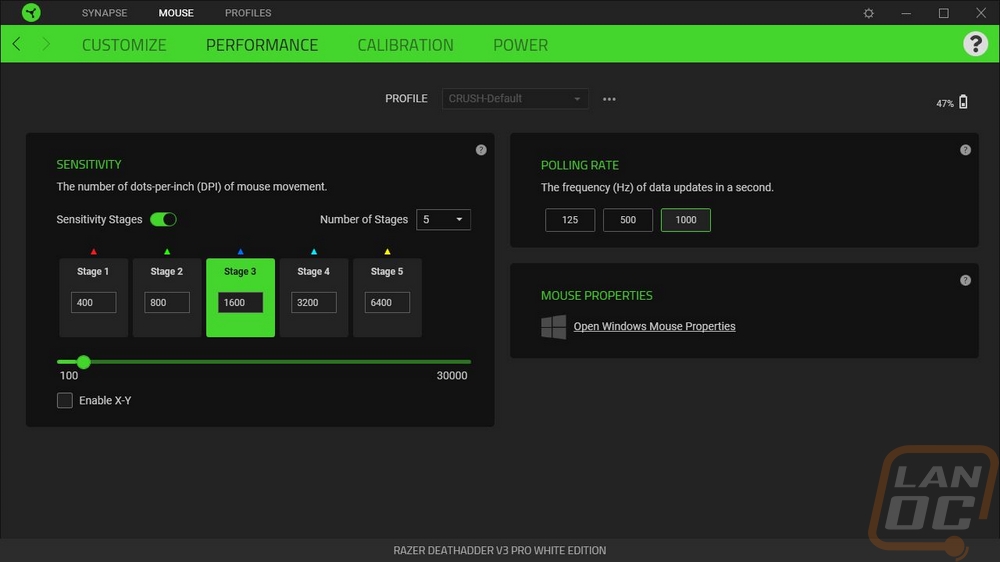 The calibration page is about calibrating your mouse surface but this is setting up your lift-off distance. They give you a simple slider that you can adjust or you can turn on asymmetric cut off which lets you adjust the lift-off distance and the landing distance at different rates. 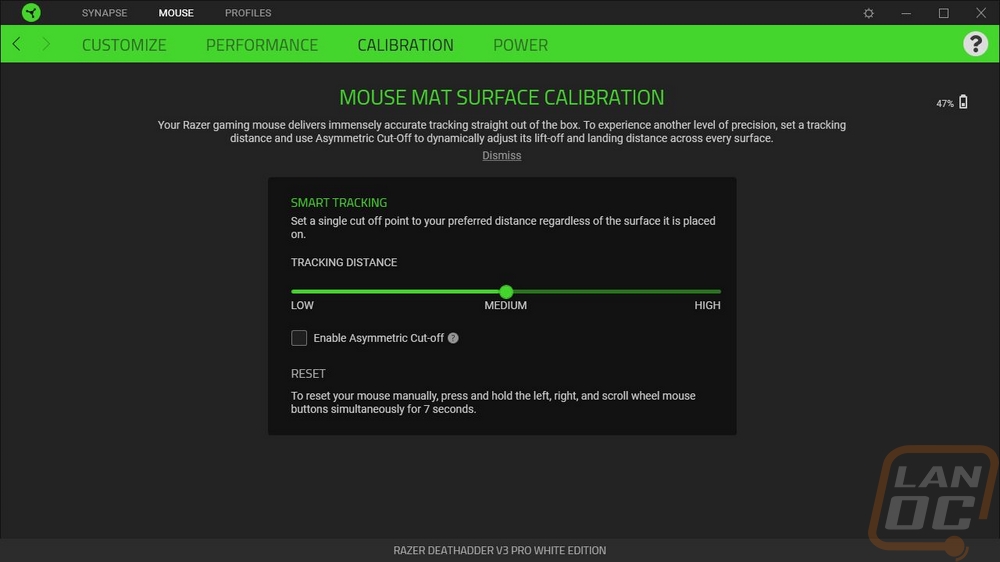 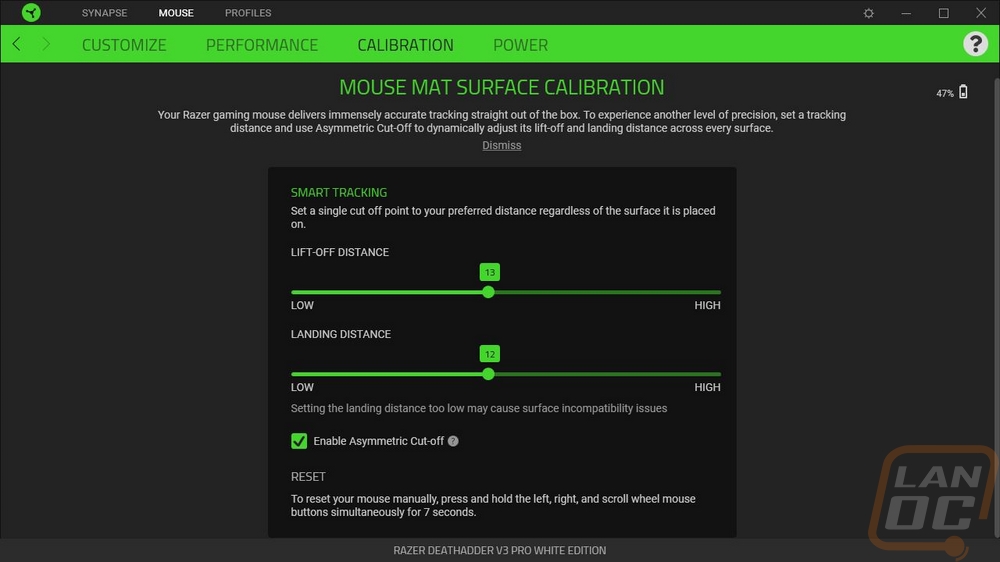 The power tab has your battery settings and there are just two settings for the Deathadder V3 Pro. You can change the idle time before it will go into wireless power saving mode which by default is set at 5 minutes. Then you have the low power mode start percentage which is defaulted at 30%. 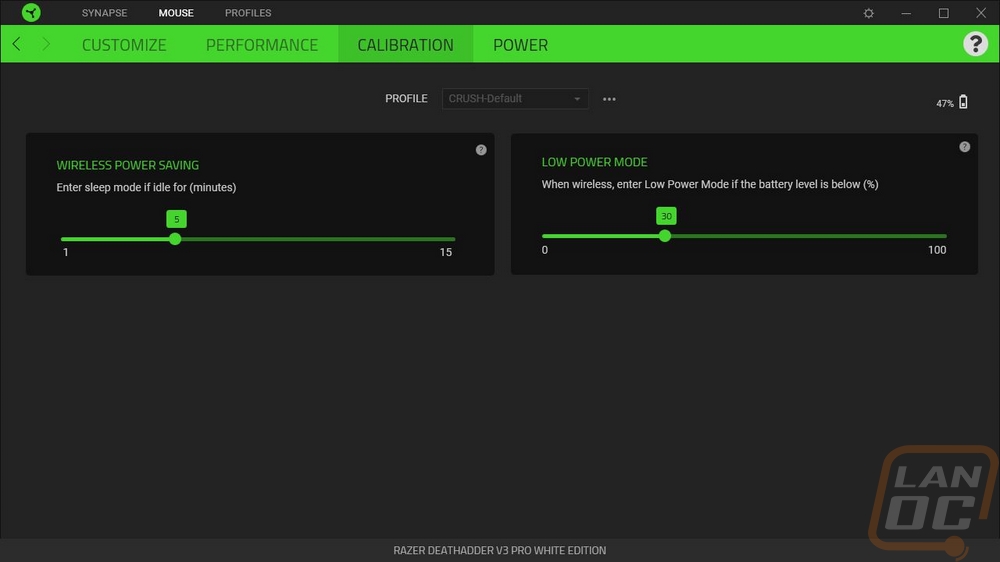 You can create more than one profile or set profiles up to be app specific for games in which you maybe want custom button profiles. 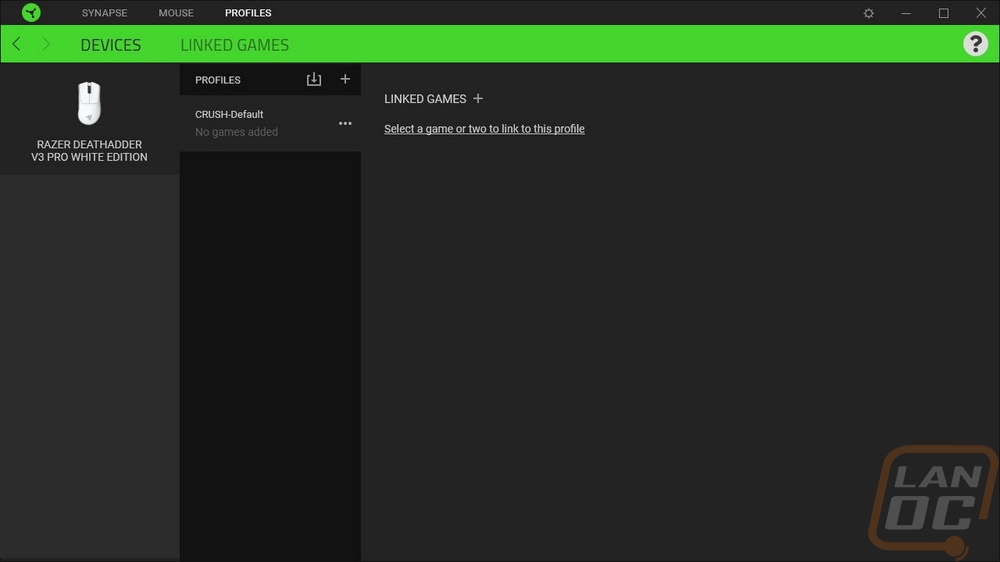 For the rest of my testing, I switched from my normal Logitech Superlight to the Deathadder V3 Pro as my main mouse. Because of the launch and the timing of when our V3 Pro came in, I only have had a week of testing but during that time I have been using it for gaming and everyday use trying to put some miles on it. The biggest thing I have noticed is that in most ways it feels just like the Razer Viper V2 Pro that I reviewed last month. That isn’t a huge surprise given how much the two mice share but I think it’s the first time that a Deathadder has felt like anything else for me. In the past Deathadders have been big heavy mice with a unique shape like nothing else and while the Deathadder V3 Pro does share a lot of the same shape the small changes were enough to make a big difference. In some ways that isn’t a bad thing, the 63/64 gram weight is amazing and with this being a larger mouse it almost feels like it is even lighter than that. The slightly raised and moved peak fits my hand a little bit better but the moved side buttons where I like them just don’t feel like a Deathadder anymore not to mention having less flare on the triggers visually.

The Deathadder V3 Pro doesn’t have any of the lighting that Razer used to have back in the day and I’m perfectly fine with that and they have also avoided the rubbery grips or grips altogether really. I do however think that the black model which doesn’t have paint may have a slightly better texture assuming it has the same heavy texture that the Viper V2 Pro has which I liked. You can feel it on the white Deathadder V3 Pro but it just has slightly less grip. Combine that with the ergonomic shape that the Deathadder has always had and as someone who lifts their mouse often when gaming I may need to use grip tape which was something I didn’t need with the Viper V2 Pro. Thankfully Razer includes a full set.

The wireless performance like with the Viper V2 Pro was flawless, I didn’t have any issues with it, and even with just the stock receiver and not the HyperPolling receiver that is optional that bumps you up from 1000Hz to 4000Hz the Deathadder V3 Pro does well. With just a week of use battery life is a little hard to tell but the Deathadder V3 Pro is rated to 90 hours of battery life of constant 1000 Hz motion so I haven’t killed the battery yet after giving it its first charge a few days in. When charging you do have the extremely soft and flexible charging cable which for the white model is also a matching bright white so even when forced to go wired you are hardly going to feel it. But I do still wish there was a wireless charging option like Logitech and a few others. I’m just really bad about remembering to charge especially if I don’t have a charging dock like Razer has used in the past. The Deathadder V3 Pro like the Viper V2 pro does have a standard Type-C connection so you could if needed use a phone charger to charge it as well, but if you are using it while doing this the included soft cable would be a love nicer.

The Deathadder V3 pro has the same Gen 3 optical switches as the Viper V2 Pro which means it has the same loud satisfying clicks when you press them and a crazy 90 million click rating which should hopefully mean no issues for years. The scroll wheel grips well and works as you would expect it to and I don’t hear the slight rattle like our Viper V2 Pro had. I also found the side buttons to be easy to reach even though I do miss the more curved shape of the older Deathadder designs and those have a good click as well. Then for the PAW3950-based Focus Pro sensor like with the Viper V2 pro, it has been great, with no noticeable flaws or issues, and the 750 IPS picks up on quick movements great.

We have 1810 guests and one member online