You’ve seen “Gaming Glasses” before advertised around LAN party’s for the last few years but are they really worth it? We took a look at a pair of Gunners a while back HERE. The Gamers Edge and iVisionwear glasses are a cheaper alternative to your more expensive glasses. With many different configurations and style’s, they might just be what your looking for to gain that little edge that you need at your next LAN or gaming session. With two samples in for review we should be able to get a good idea of how well the lower priced Gamers Edge and iVisionwear glasses perform.
Product Name: Gamers Edge, IVisionwear
Review Sample Provided By: Vision Concepts International
Written By: Skyler
Pictures By: Skyler
Packaging


The packaging of the glasses was top notch. Both sets of glasses arrived in nice quality packaging. This is key because the last thing you want is to pull your new glasses out of the box and find scratches all over them. The included carrying bag will make you forget about knocking these around. Instead of just chucking them in your LAN bag, you can carry them in the sleeve while travelling between LAN’s. No matter what version you choose you will receive the carrying sleeve, which is a nice touch. The Gamers Edge glasses just scream "Look at me", while the iVisionwear glasses look more refined. 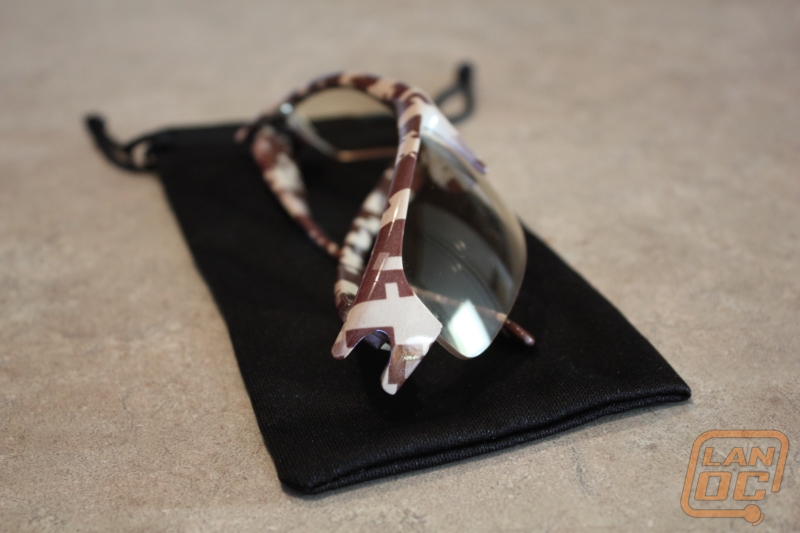 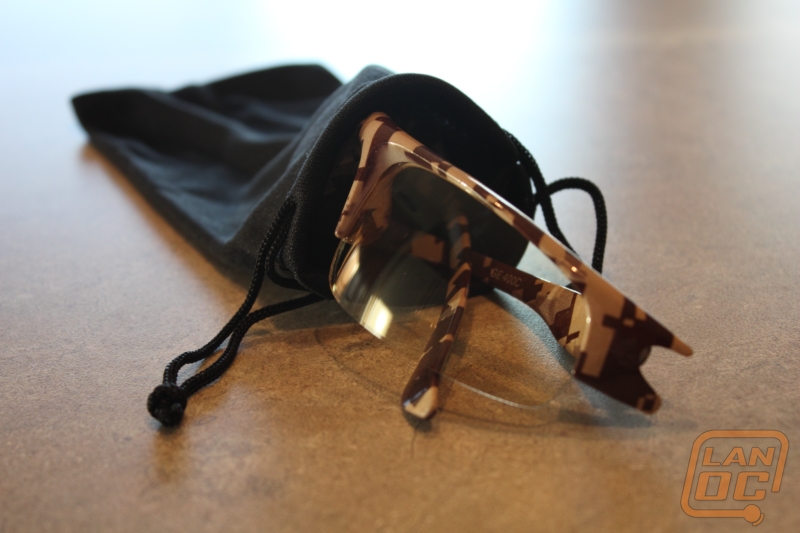 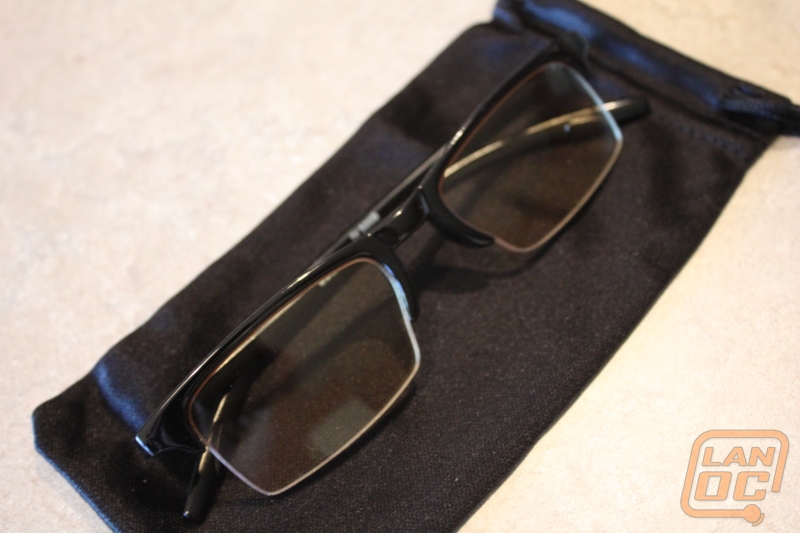 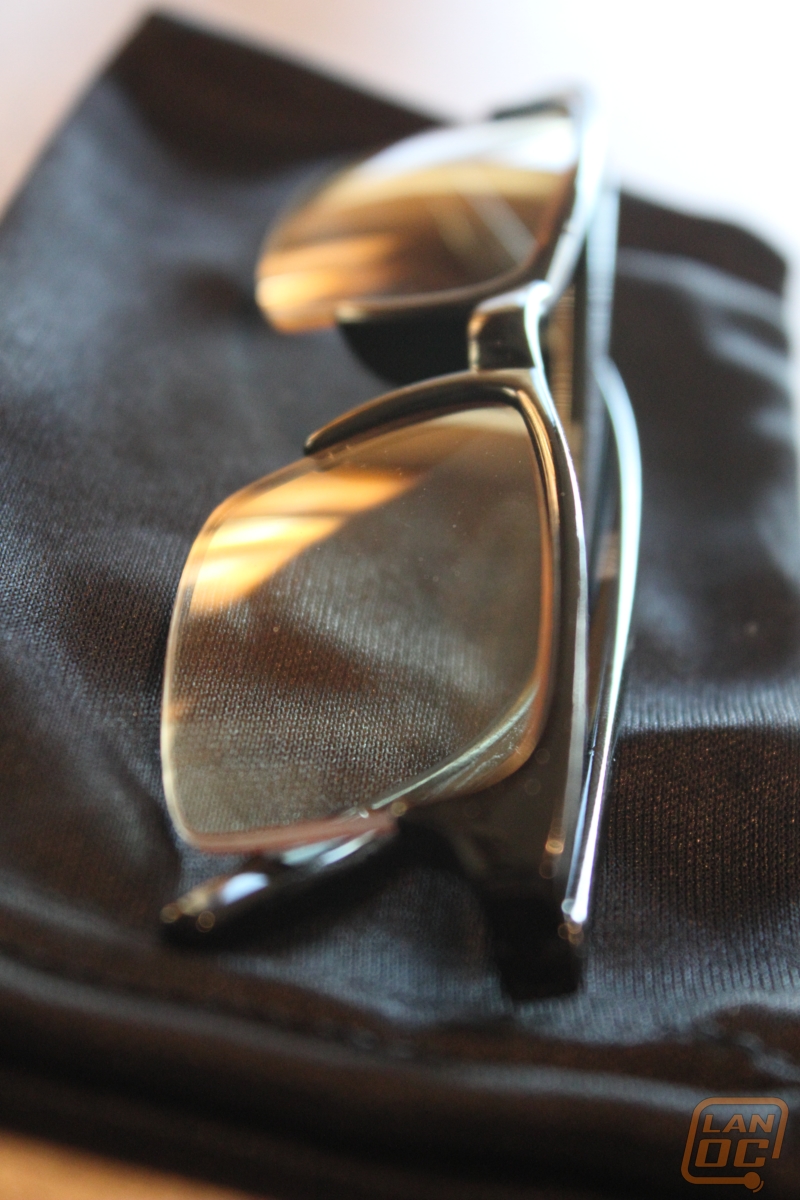 The first item that you will notice about both of the glasses is the style. The Gamers Edge glasses look more like hunting glasses or safety glasses. With a nice yellow tint to them it actually enhances your gameplay experience. Overall they look very brawny with a design that say’s “Look at me, I’m wearing gaming glasses”, on a side note they do sell these in straight black which I prefer. On the iVisionwear side it’s a bit different. These come off more as a reading glasses style to me. They are very understated and feel great. They are very light and after a couple of minutes I forgot that I was even wearing them. They also have a nice “tint” to them and actually improve the focus of your screen. More on the focus later. 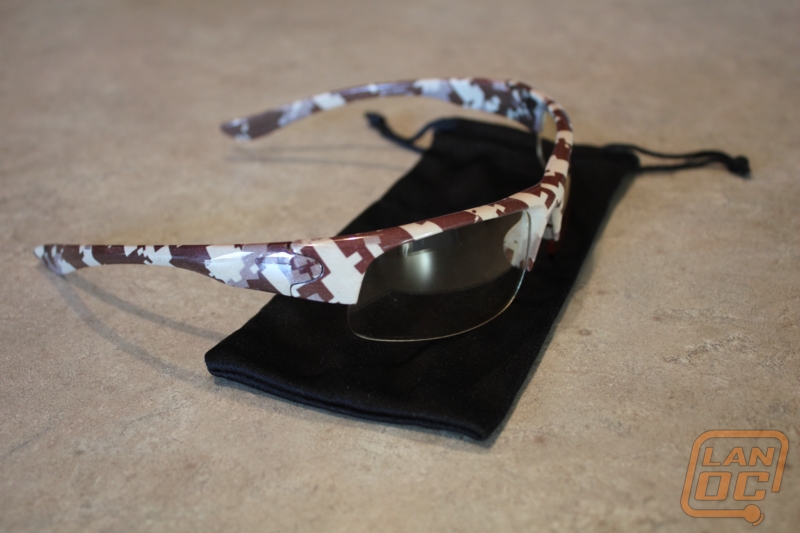 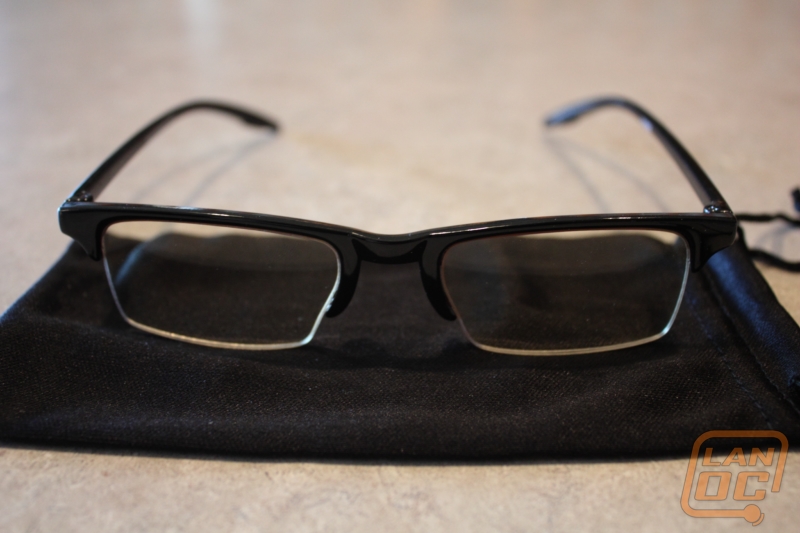 I used the iVisionwear glasses for about 8 hours of game play on the Main Gaming Rig, which has triple 24in monitors.  That is the same PC I  use for Gaming News and found them to be quite comfortable throughout my sessions. I like “lighter” glasses, the iVisionwear, rather than big "beefier", Gamers Edge, ones. They felt great the whole time I was using them. Never did I say, “I can actually tell that I am wearing these” and that is what you want. You want glasses to disappear while you where them, you want to forget that you are wearing something on your face. Both of the glasses use what Vision Concepts calls an "iEDGE Lens Filter" it is suppose to "eliminate the harmful artificial light emitted from the average computer or digital device." I have been gaming for a long time now and I have never had a problem with my eyes getting tired. These do try and enhance the image that the monitor is trying to display but from my use it almost seems to soften the colors a bit. If you are working on editing photo's I would stay far away from any type of non-prescription glasses because these do change the color's appearing on the screen ever so slightly. 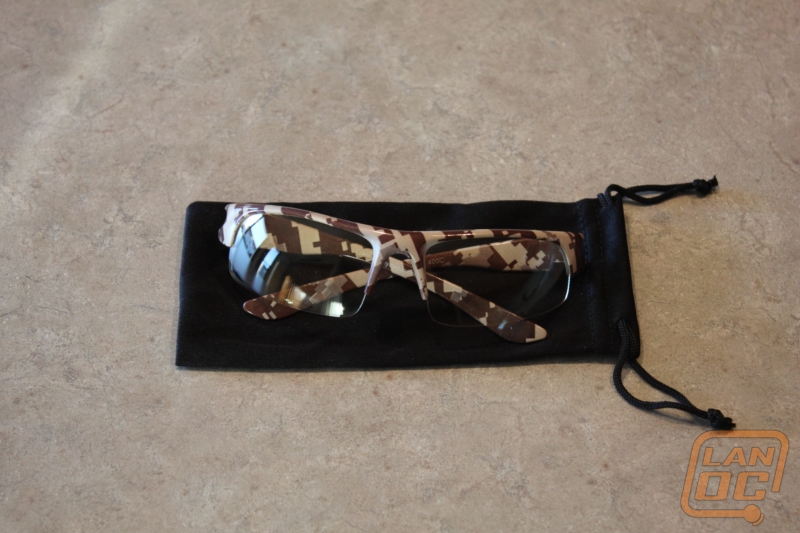 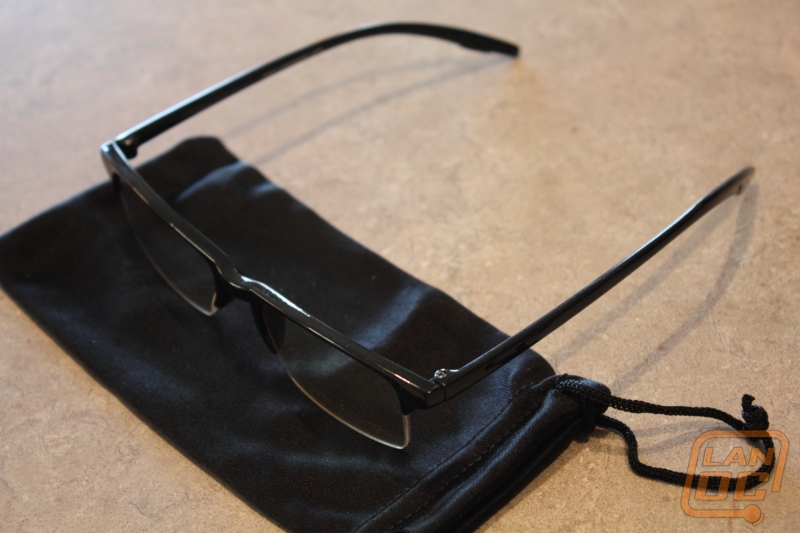 Both sets of glasses were used at the Nexus LAN a few weeks ago. While they really do travel well with the included carrying bag, for some reason they just didn't work for me at the LAN as they did when I was at home. Maybe it was the lighting or lack thereof but that is common with LAN party’s these days. Everyone that I have ever been to always cranks the lights down low. What also came to my attention while using these, was the fact that the farther you are away from your monitor the focus becomes blurry. It wasn't really an issue when your fragging baddies all day long but when you want to sit back and just relax while you wait for your next tournament to start it does become annoying. I had our lead editor Wes try them out for a bit while standing back and even he could tell the focus goes haywire the farther back you sit. I am talking feet here by the way, not inches. Just don't wear them while your watching you HDTV that is positioned ten or more feet away from you. This is where the cheaper glasses stand out from the Gunners that we tested before. Although the optics are good, they are not perfect, this is shown in the blurring at a distance. My concern would be that this could cause eye strain, the opposite of what you would want these glasses for. 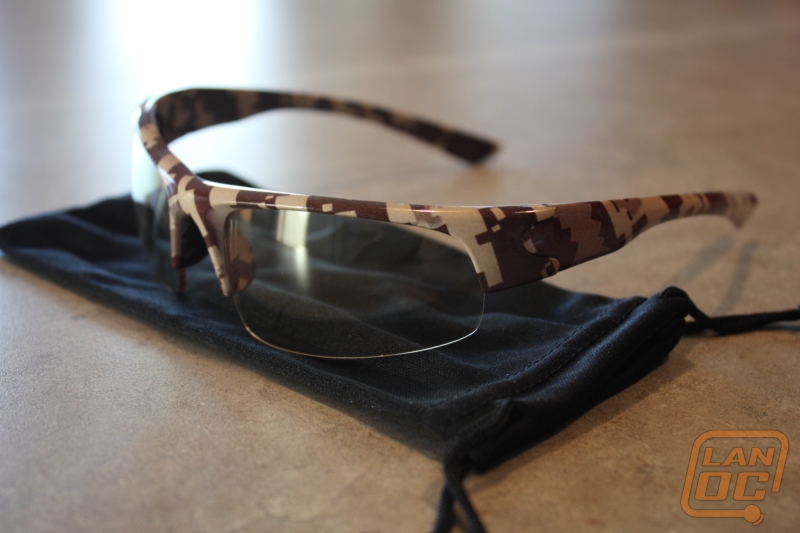 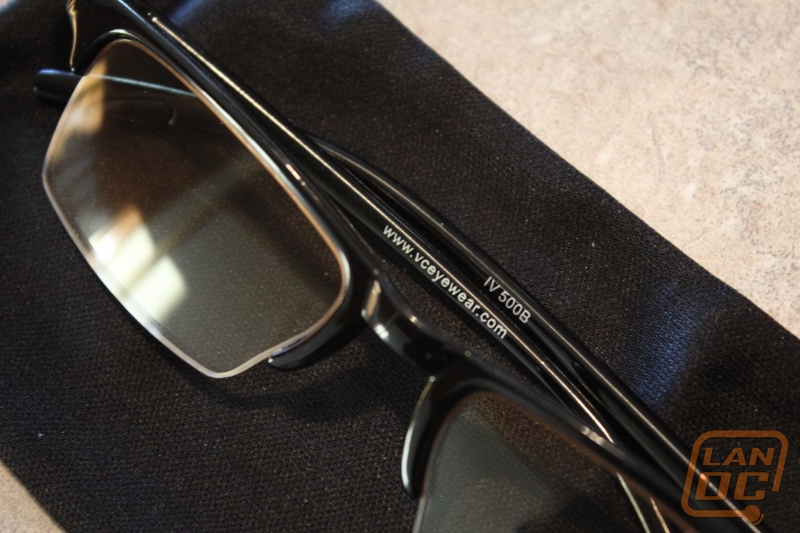 I really wanted to like the Gamers Edge glasses but they just weren't my style. They were a bit to heaving and the camo design was a bit much for my tastes. On the other hand, the iVisionwear optics were awesome. Other than the focus problem, these were the ones that I kept grabbing for out of the two. I would rather someone spend their hard earned cash on a better mouse, keyboard or monitor. These are the items that you use everyday. Your not always running benchmarks or playing your favorite games. If you are going to interact with you PC then you are going to need a mouse, keyboard and monitor, that might take a backseat when Kinect for Windows comes out. Until then though, if you are pleased with your current setup and want to take the plunge down the gaming glasses line. These are a good entry level starting point. They do work how they were intended to and they felt great while wearing them. In my opinion the iVisionwear glasses were the better of the two. The MSRP for both sets of glasses is $39.99. 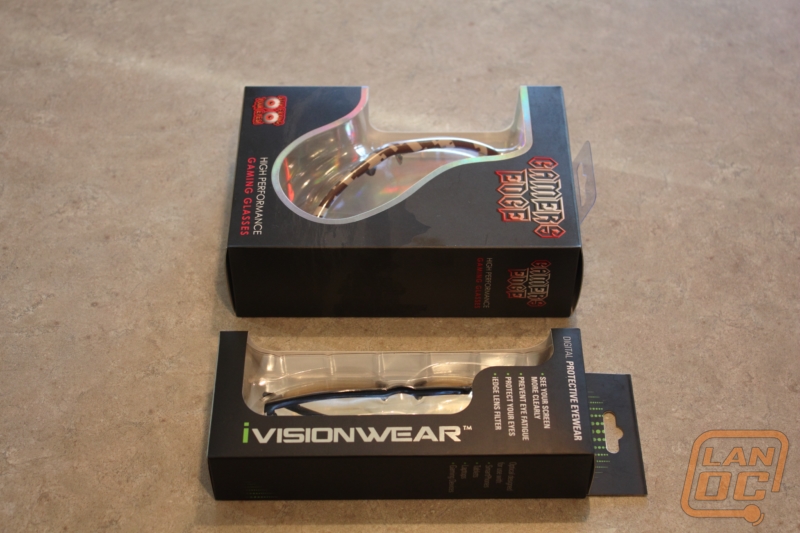 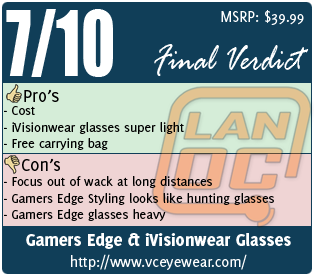 Dreyvas replied the topic: #21346 03 Dec 2011 00:33
I was not aware these existed. Started reading the article thinking they were 3D or something. So basically they're f.lux in glasses form? stereopsis.com/flux/
Read More...

We have 1001 guests and one member online