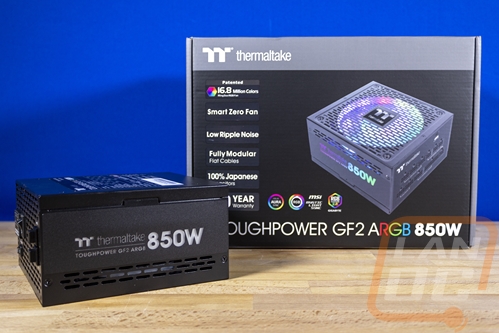 Both the left and right sides of the Toughpower GF2 ARGB have the same styling. The power supply has a black casing then on the sides they have added textured black stickers. They have the Thermaltake logo along with the full Toughpower GF2 ARGB 850W name. The wattage is in a much larger and bold font. They look white, but these are translucent and use the addressable RGB lighting to light up. The side also has three rows of ventilation slots as well on each side. Then from side to side, they do have the branding flipped so you will be able to read the branding if you have the fan facing up or down. I like that the sides are simple and they even include the wattage, not just a basic cheap sticker like most PSUs. But I’m also always talking about how all of the backlit branding can start to turn your PC into times square if you aren’t careful. 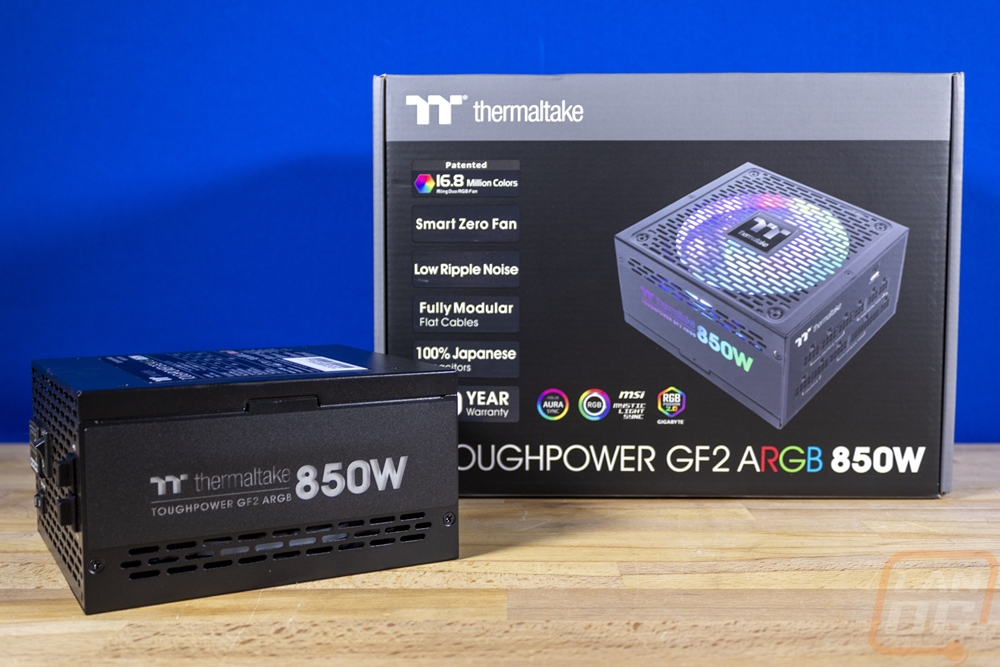 As far as size goes, the Toughpower GF2 ARGB is a standard ATX power supply. Thermaltake wasn’t able to get the size down to the full square. But it is close with the width being 150mm and the depth at 160mm and of course the height is the standard ATX 86mm. 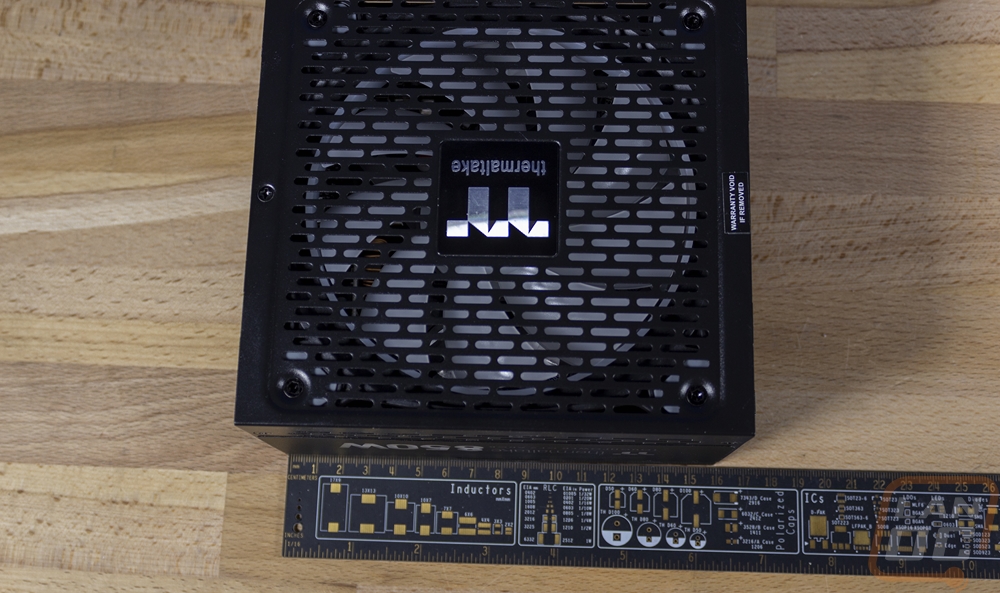 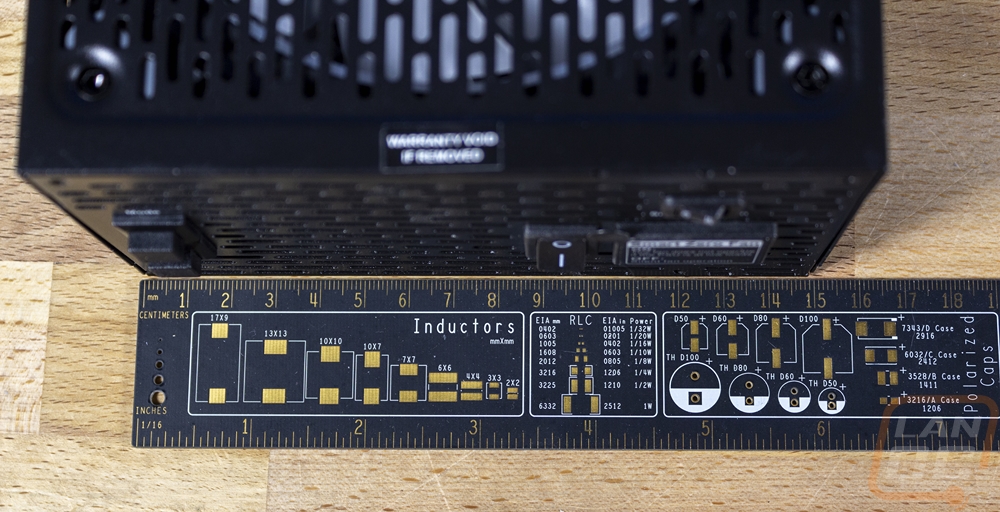 The outside facing end of the Toughpower GF2 ARGB is where things get a little interesting, however. It has the standard power connection and with that a power switch that is next to it. Thermaltake includes a warning sticker over the plug to let people know that if in smart zero mode that the fan not being on doesn’t mean the fan is bad. We have seen this a lot with other power supplies and even video cards, people must be calling for support a lot when not seeing the fan running. Above the plug is the smart zero fan mode switch which they have a label under it and each to read on and off on the switch itself. Which does make me wonder why we don’t see that more on the main power switch, I can’t be the only one who forgets if the O or I is on and flips between both to figure it out each time. Then on the left, the Toughpower GF2 ARGB has two buttons. These are for the built-in addressable RGB lighting. You can flip between different lighting modes and then on each mode you can switch to different color options without using any software or connecting the lighting into your motherboards lighting headers. 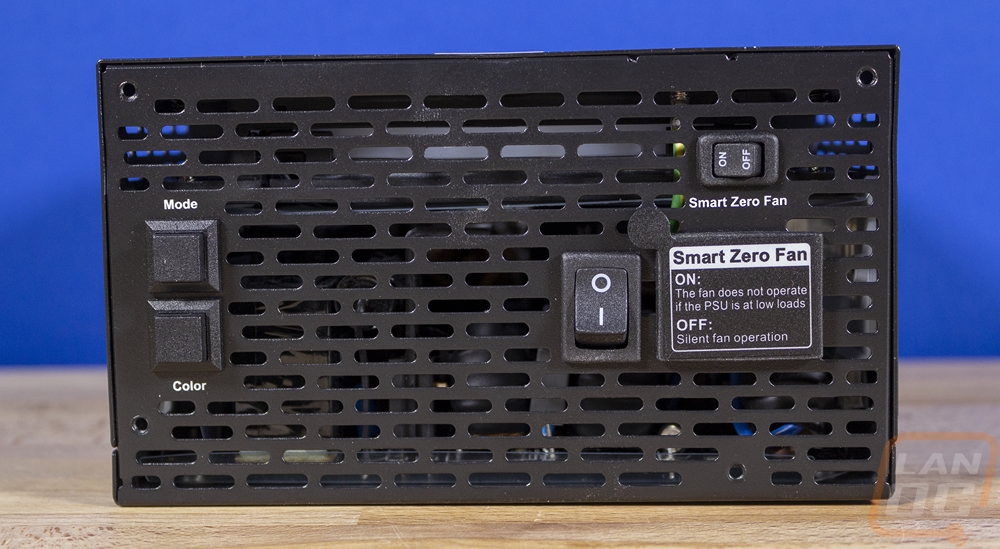 On the other end, facing inside of your PC the Toughpower GF2 ARGB has another textured black sticker. The sticker has all of the legends for each of the modular plugs on it as well as a Thermaltake logo up in the top left corner. For modular connections, the 240pin is split into two plugs and is in the center at the bottom. Then on the left, there are a total of 5 8-pin CPU/PCIe plugs, three up on the top row and two down on the bottom. Then on the right, there are four 6-pin peripheral/SATA plugs with three up on the top row and just one on the right of the 24-pin plug. Then up above all of that, there is one small plug for the RGB sync. This is what I like about the Toughpower GF2 ARGB, I’ve had other Thermaltake RGB power supplies that didn’t use software and just had the button to flip through your lighting options. But the Toughpower GF2 ARGB can do it the simple button way, or if you want you can hook the addressable RGBs right up to the motherboard header. Either way, Thermaltake doesn’t have to worry about software. But you can pick what works best for you and that might change in the time that you own the power supply. The Toughpower GF2 ARGB has a 10-year warranty, most people will change or upgrade their PC multiple times in that time. It’s nice to not have to worry about maybe wanting to upgrade later to add control or if you decide you want something simpler later. 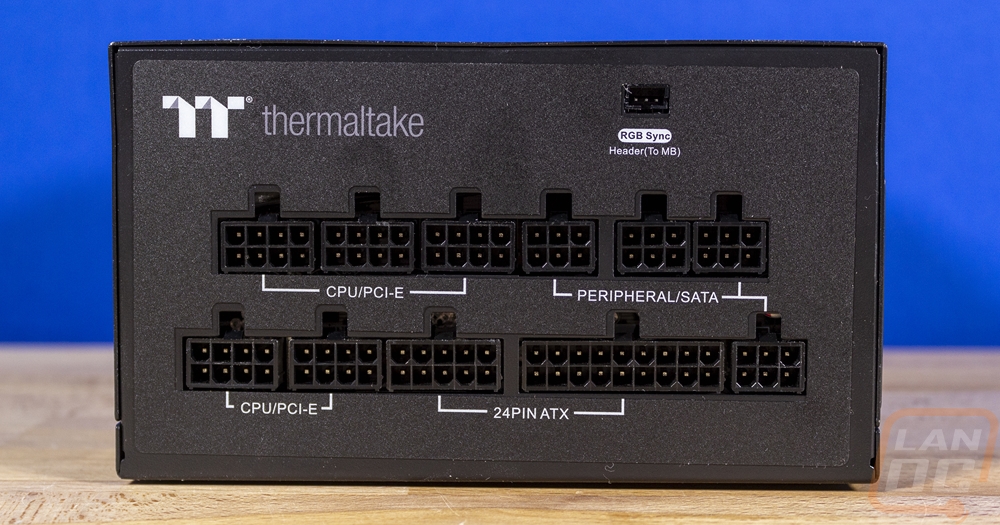 For the top and bottom which depend on which way you have the PSU flipped. One side is a solid panel and this is where the Toughpower GF2 ARGB has the main information sticker. It has the model name up top with the TT branding. Then below that is a breakdown of the wattages per voltage. Then it has all of the normal certification logos and a spot for a sticker that has the official part number and your serial number. On the flip side of that, the other side is completely open with round ended slots. This is the fan side which has a 140mm fan behind the vents. In the center, they have a square spot for the Thermaltake double T logo. The fan isn’t lit up here, but we can see that it has the normal Thermaltake Ring fan design with a translucent ring on the outside and translucent fan blades as well for the ARGB lighting. 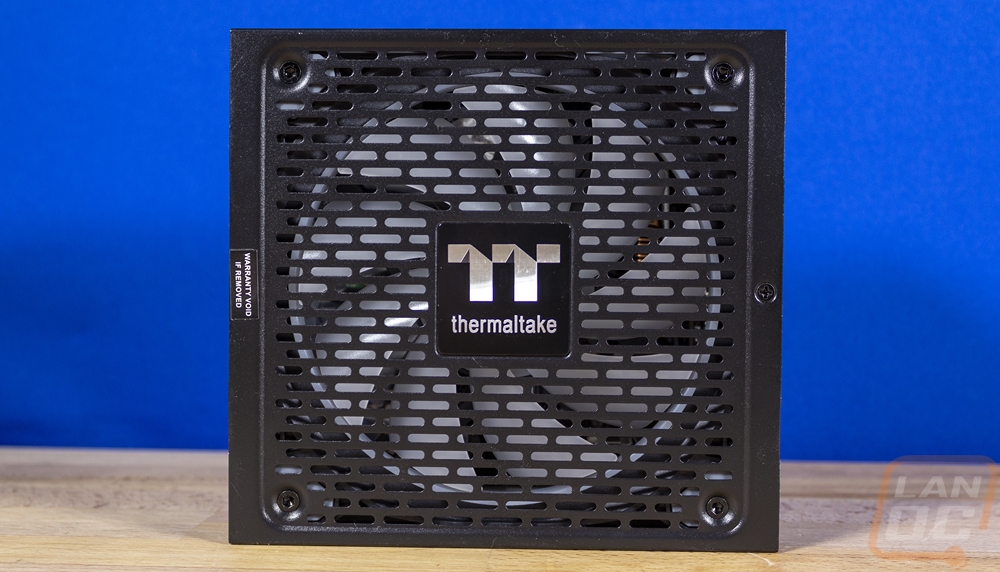 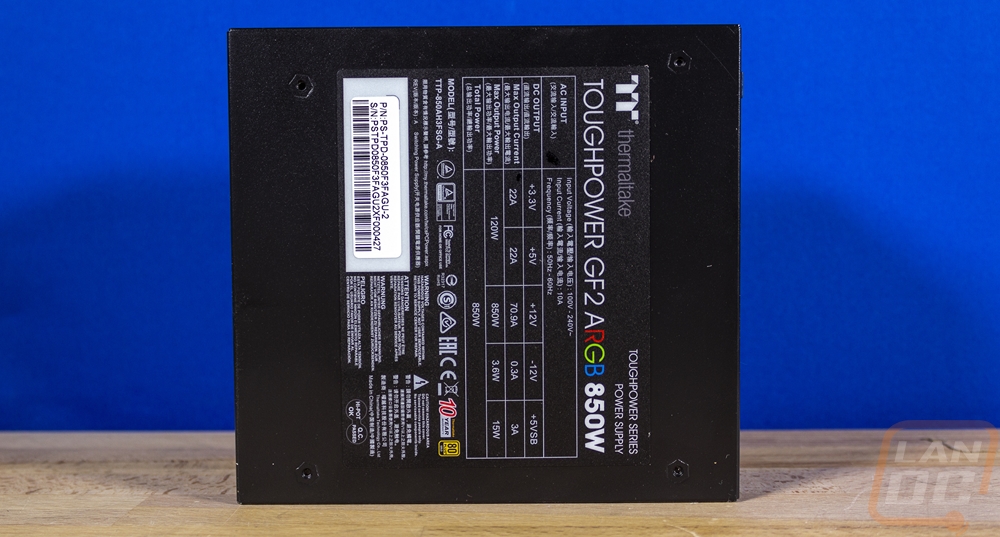 Along with the Toughpower GF2 ARGB, Thermaltake also included a heavy-duty bag that has all of the accessories and cables for the power supply. Modular power supplies used to all come with a similar bag but over time they have been starting to vanish, so it is great to see it still included here. You almost always have extra cables left from a build, it’s nice to have a place to keep them all together and so you know which power supply they go to if you have more than one PC. So inside of the bag you have the standard NEMA 5-15P to IEC-320-C13 power cable. Along with it they also have small bags with a set of black mounting screws and zip ties. They only include four zip ties which isn’t much and not enough for most of the builds I have done. But it is a start at least. There are also two smaller cables that aren’t part of the normal modular cables. One is a short Molex to floppy adapter. I’m surprised these are still being included because I haven’t seen a device that uses a floppy power connection in 15+ years. But I can’t complain too much that they are still covering the connection in case it is needed. The second cable is the ARGB cable that plugs into the tiny connection on the Toughpower GF2 and then runs to your motherboard. It has two different plugs on the motherboard end. This is because different motherboard companies have different layouts. 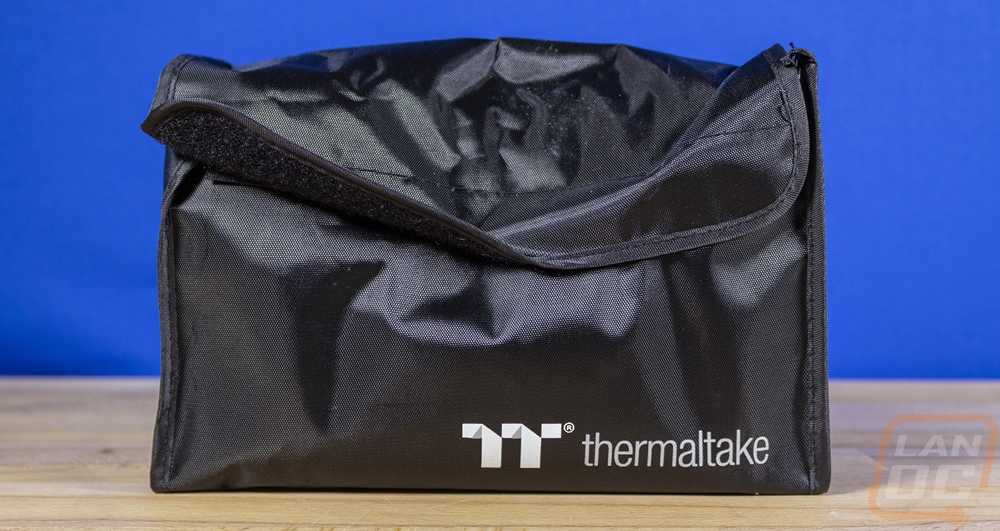 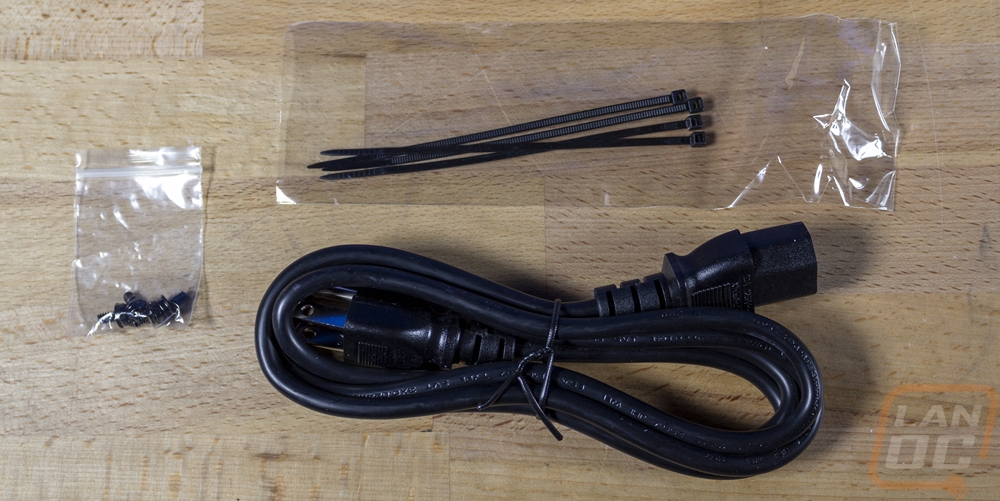 For the actual modular cables, the Toughpower GF2 ARGB has a relatively standard cable set. They are all the flat and flexible cables that make wiring much easier than sleeved cables including the 24-pin which some companies like to still sleeve for some reason. They are all black as well which matches well with the Toughpower GF2 ARGB itself and most cases. The 24-pin is just over 24 inches long and the two CPU power cables are a little longer at 27 inches. Both of those have the 4+4 plugs on the end to support motherboards with just a  4 pin or an 8 and a 4 configuration. There are then three PCIe cables and they all have the same layout. They have dual plugs with the first at 21 inches and the second 6 inches past that. All six plugs are 6+2 connections as well to have flexibility depending on the connection type needed for 6 or 8 pin plugs. Then there are four accessory or peripheral cables. Three of those are SATA power cables. Those have four plugs in total with plugs at 20, 27, 33, and 39 inches. Then there is one Molex power cable which also has four connections in the same 20, 27, 33, 39 intervals. 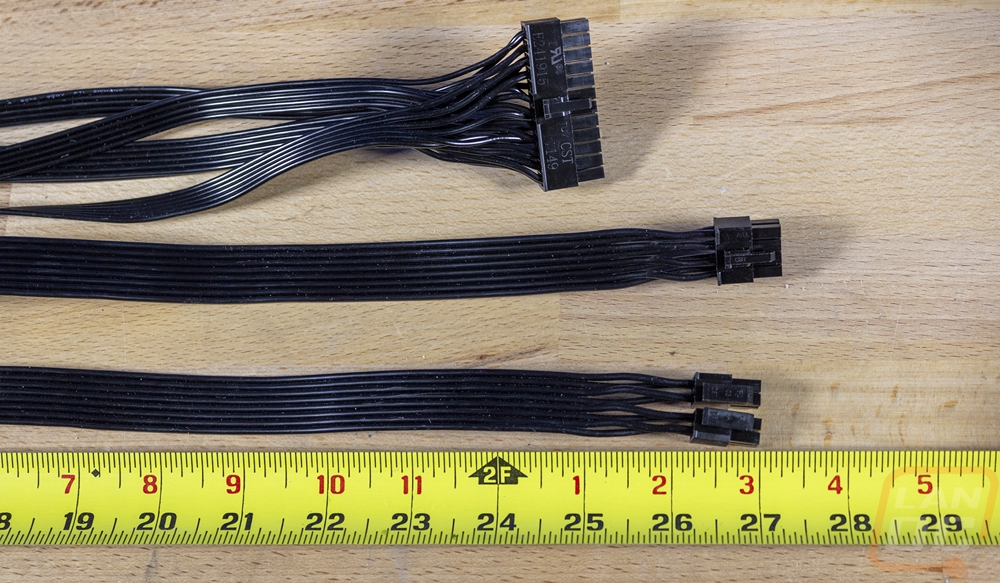 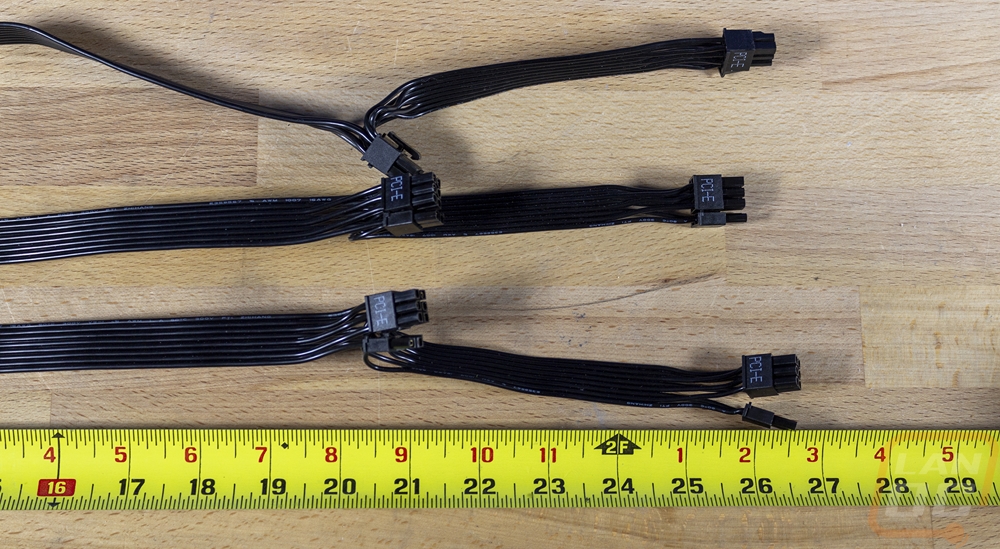 So I did run into an issue with our early sample of the Toughpower GF2 ARGB but it did give me a reason to dig inside as well. Before hooking things up I noticed a loose screw moving around and I obviously didn’t want to hook the power supply up with that loose and risk it grounding something out. I reached out to Thermaltake about the issue and they did send a replacement. But more importantly, I was surprised at how serious they took the issue and they follow up with a lot of information. In short, they checked all of their inventory to make sure none of them had the issue and didn’t run into any with the same issue. But they also worked with their manufacturing to include inspections to make sure there aren’t any future issues. 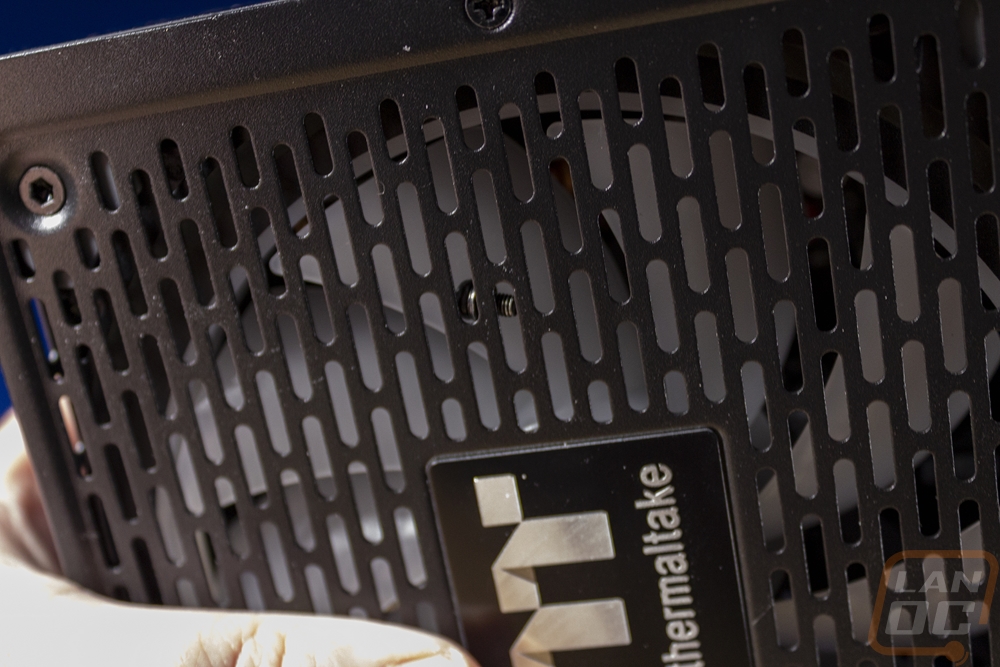 Now when I dug inside I found that it was a mounting screw holding down the main PCB. Overall Thermaltake did a great job handling the issue. Defects do happen sometimes and it isn’t exclusive to them at all. I would recommend keeping an ear out if you pick up the Toughpower GF2 ARGB, if you hear a loose screw let them know. But I highly doubt it is a common issue, but I have to include anything we run into in these reviews. 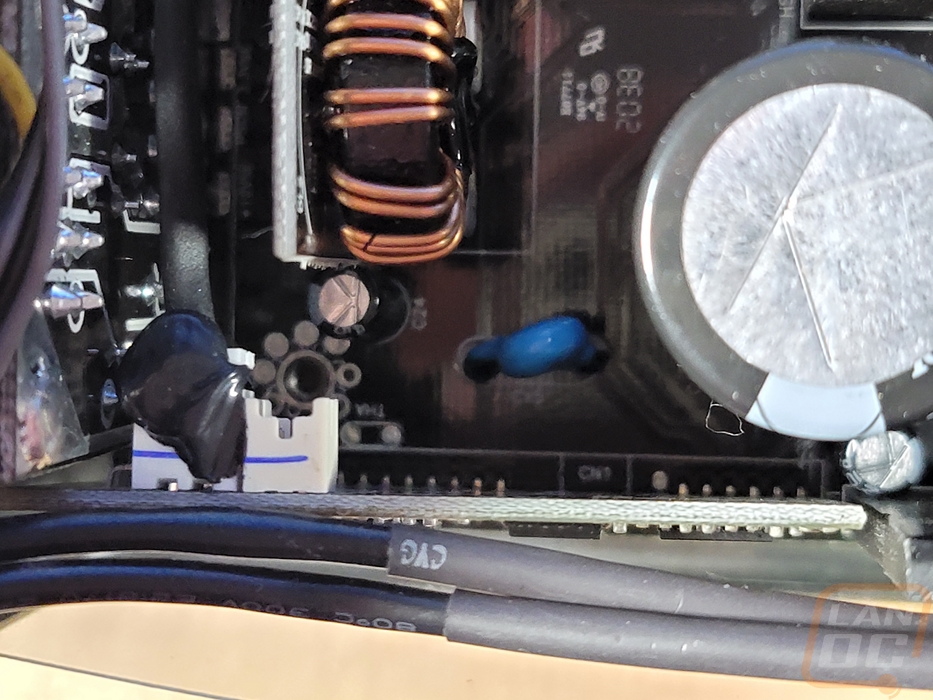 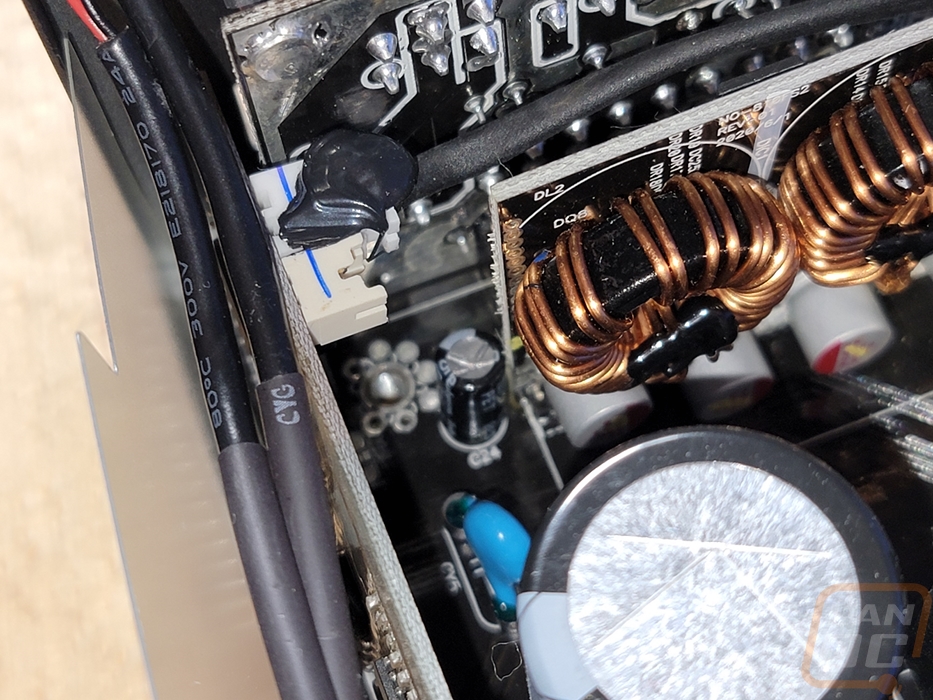 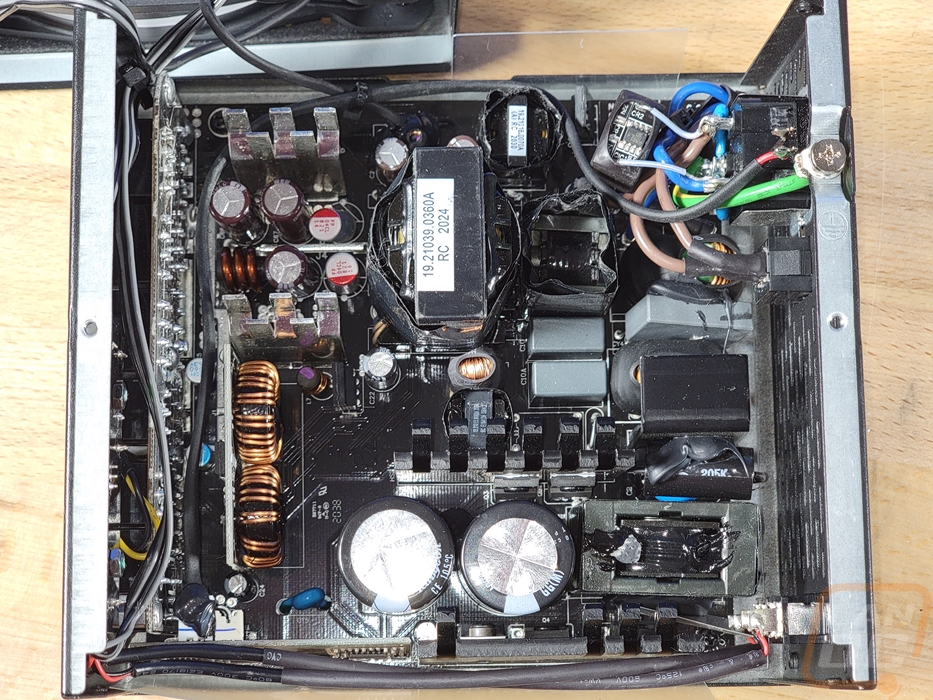 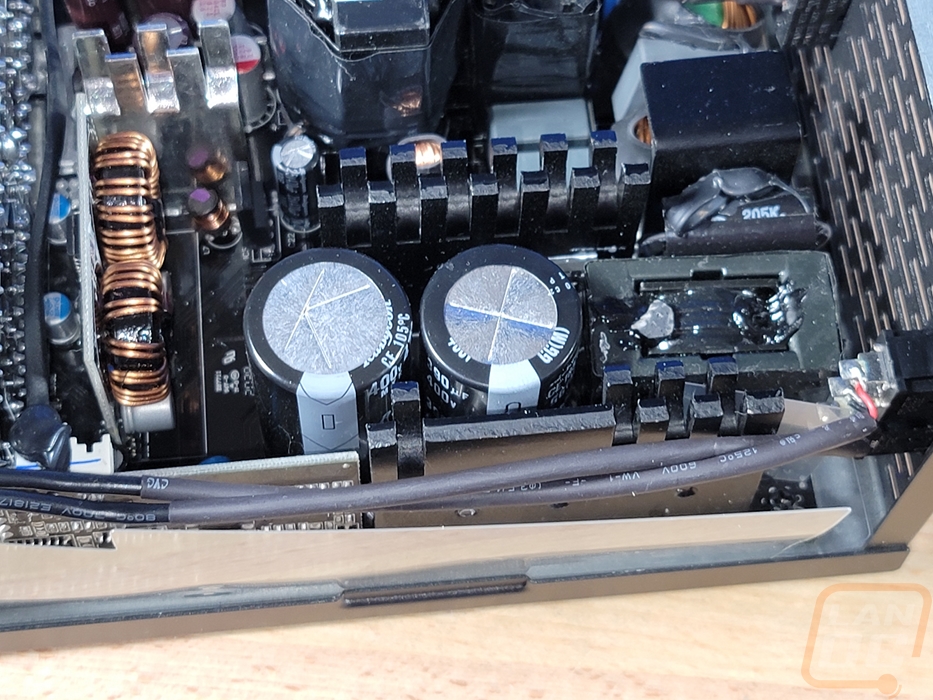 From inside I could better see how they had the side panels lit up on both sides. We could also see that the fan that they used was in fact one of their ring fans, the TT-1425, but that part number has been used across multiple fan designs from what I can see when looking it up. 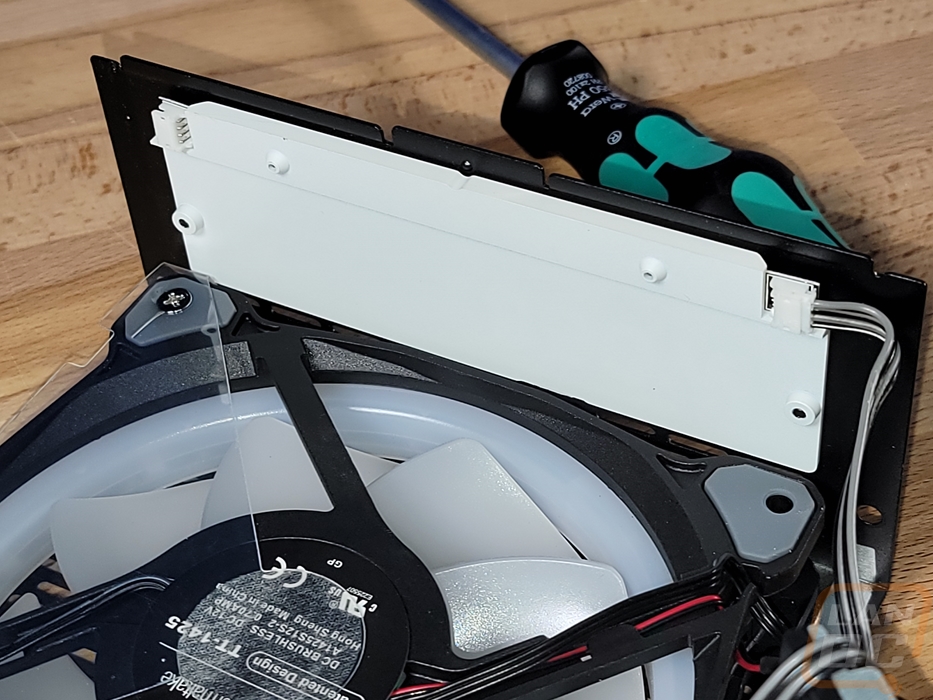 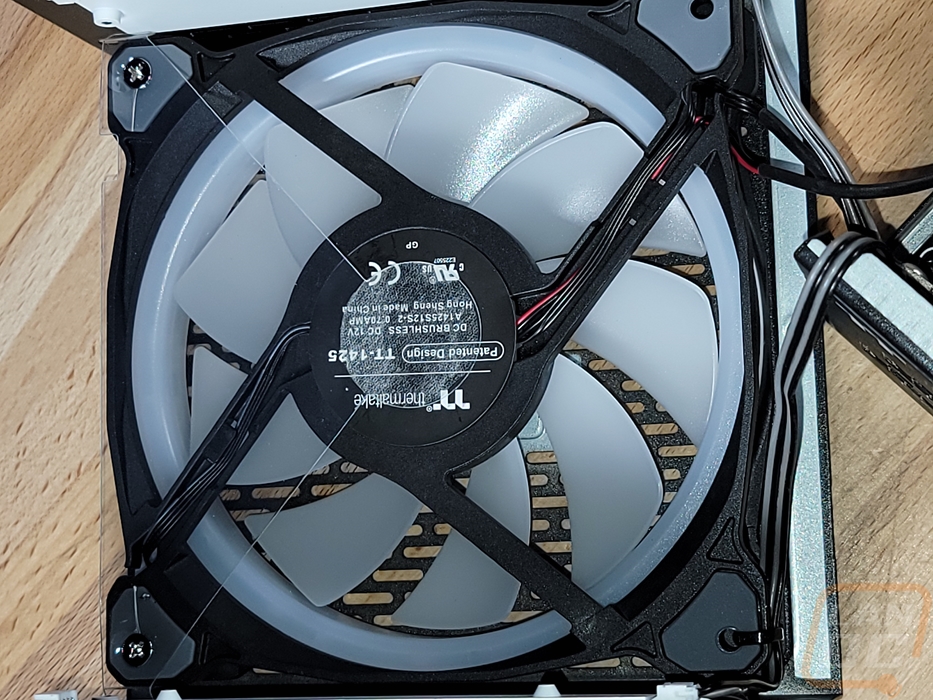 When I powered the Toughpower GF2 ARGB up to take a look at the lighting I was surprised at how much light was even coming out of the back end of the housing. All of the ventilation on the outside side of the power supply lets you see inside really well with the ring fan lighting everything up. 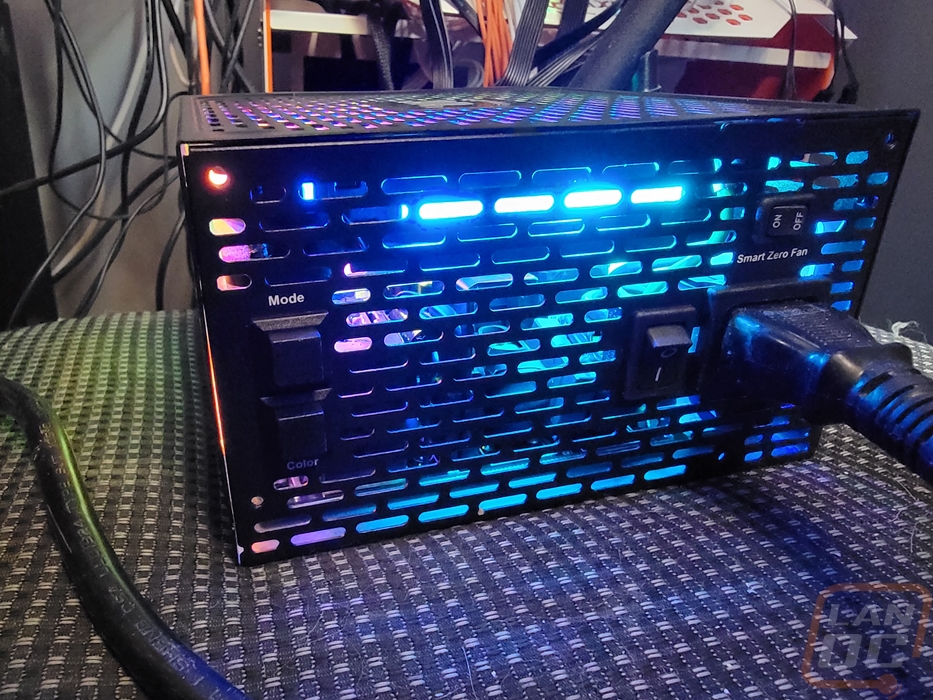 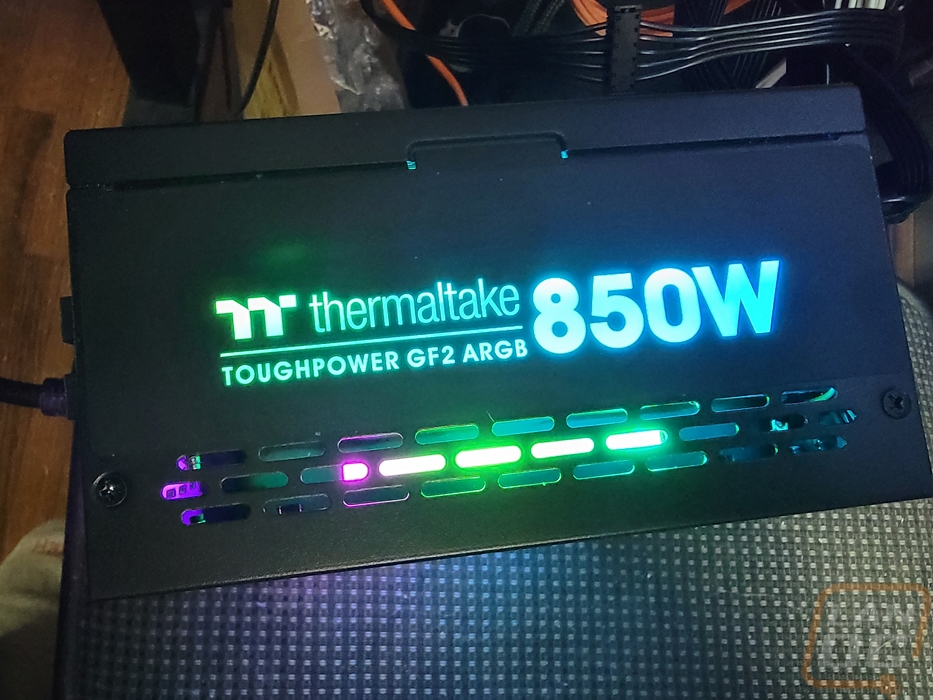 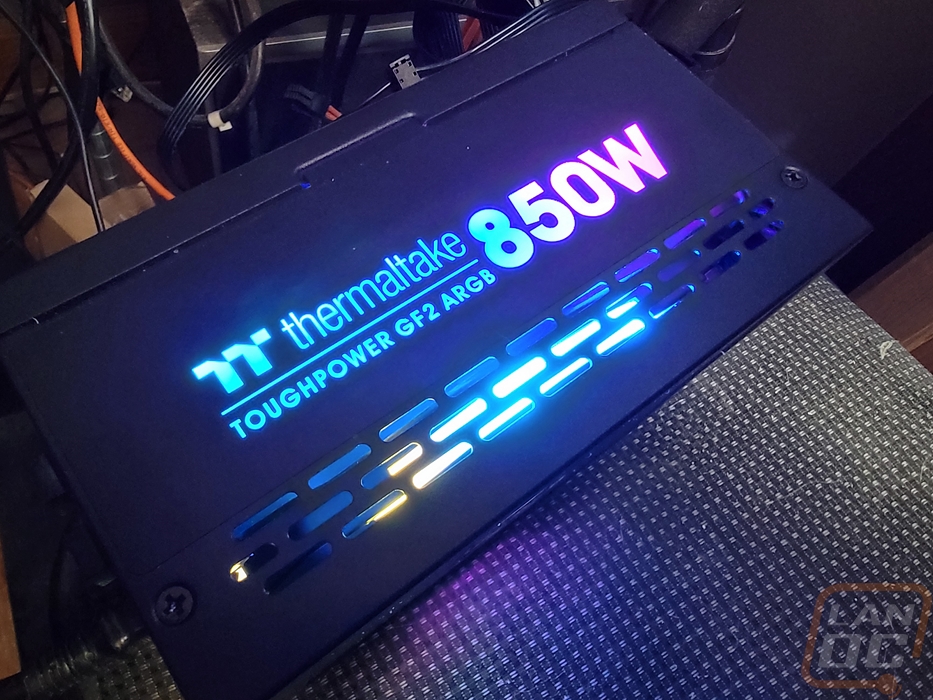 The best lighting on the Toughpower GF2 ARGB without a doubt is the view down into the fan on the fan side of the fan. Even when the smart fan is running in zero RPM mode the LED ring around the outside as well as in the inside of the translucent fan blades lights the blades up well. The blades have a cool transition effect going on as well when you have different colors on the outside and the inside like in the picture below with the pink on the inside and green and blue on the outside. 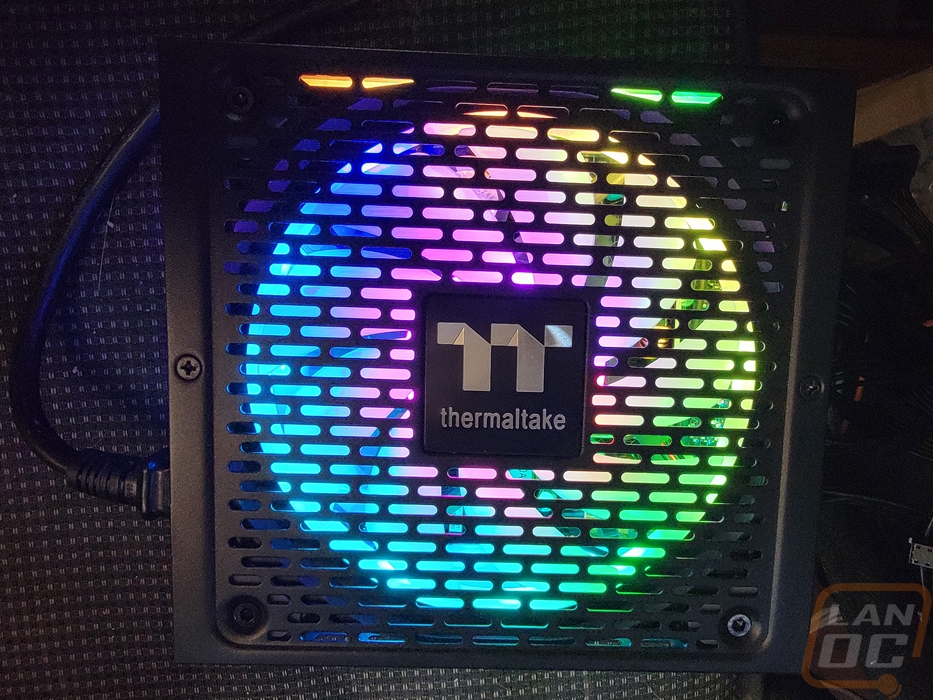 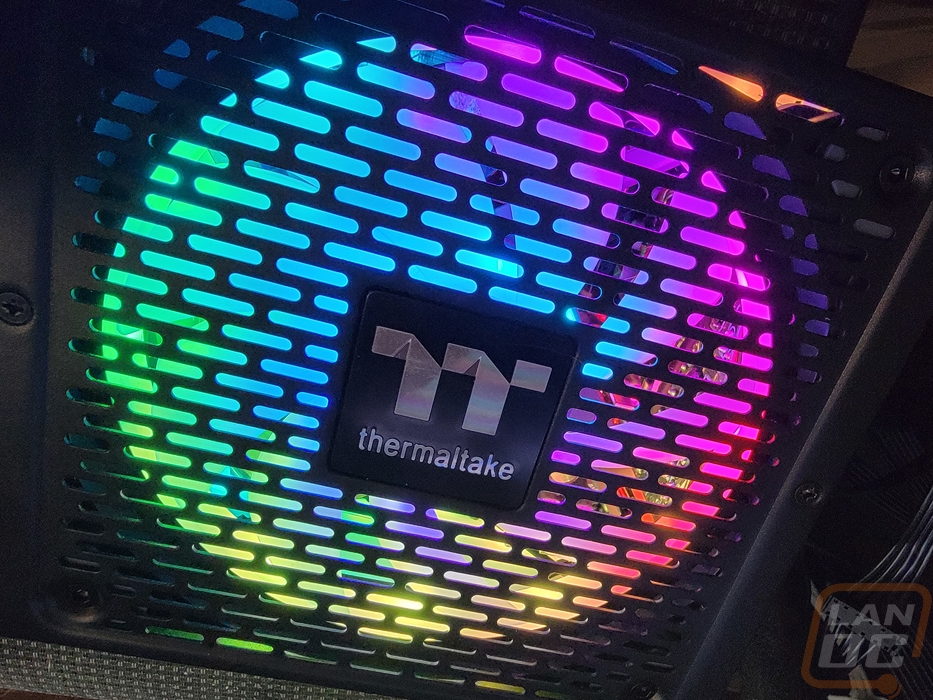 So you can hook the Toughpower GF2 ARGB up to the addressable RGB header on your motherboard or on to a dedicated controller and tie it all in with the lighting in your PC which is the best way to keep things synced if you have a lot of lighting. But if you are going for a simple rainbow effect or if you don’t have a lot of other lighting the Toughpower GF2 ARGB does have the simple control buttons on the back. You can flip between different lighting effects and there is a second button that lets you switch colors on that effect. I did record a few of the effects that the Toughpower GF2 ARGB has available. They are mostly the standard effects that you would hope to see but it’s a lot nicer to be able to see them with your own eyes.

We have 1495 guests and one member online