Just a few days over one year ago today Nvidia launched their First Kepler card, the GTX 680. If you asked me then if I would be covering a new Kepler based card (other than a GK110 based card) I doubt I would have believed you. With AMD introducing their HD 7790 this weekend that filled in a gap in their product lineup Nvidia had a response right away with their GTX 650 Ti Boost. The GTX 650 Ti Boost falls between the GTX 650 Ti and the GTX 660, right in the middle of their “Sweet Spot” cards. These are cards that should play any game on the market at 1080p and a price point that most can afford. Let’s look a little closer and see what it is all about.

Written by: Wes with help from Adam

I know what the GTX 650 Ti is, but what does boost stand for

I will be honest, when heard the GTX 650 Ti Boost name I was a little worried. The Boost part does do a good job of explaining what the card is and where it stands in their product lineup. But it is also a little long and complicated for a product name. It reminds me of back when people had to decode GTX, GTS, and GT along with a product number. For those who are confused, this would basically be the GTX 658 while the GTX 650 Ti would be the GTX 655.

I mentioned in the opening that Nvidia is marketing the GTX 650 Ti Boost as a “Sweet Spot” card. It’s important to understand what that really means before we jump into other details. The sweet spot in visual quality is 1920x1080 aka 1080p. Along with that the idea is to be able to run at that resolution at a high setting because being PC gamers, we generally don’t like to turn visual settings down on our games. A sweet spot game should be able to play today’s games at those settings at the cheapest price point possible.

Although the GTX 650 Ti and the GTX 650 Ti Boost share the same number of CUDA cores and very similar names, they are actually very different cards. With the addition of Boost functionality and a jump in base clock speeds the Boost is bound to outperform the GTX 650 Ti. Along with that you are also getting twice the memory (there will also be a 1GB versio of the boost as well) and a 192b memory interface over the GTX 650 Ti’s 128b interface. That gives you an improvement in memory speed from 5.4 Gbps to 6.0 Gbps. On top of it all, they don’t share the same PCB’s or cooling, in fact they are considerably different in size all together. The reason for all of this is actually very simple and obvious when you see the specifications listed out alongside of the GTX 660.

As you can see, the GTX 650 Ti Boost actually shares most of its details with the GTX 660. The reduced CUDA core GPU of the GTX 650 Ti in the GTX 660 package is a good thing though. Not only do you get GPU Boost and memory improvements, but you also get an SLI connection, something that the GTX 650 Ti didn’t have. I think this is especially important at a lower price point. This allows someone who only has enough money for a GTX 650 Ti Boost an upgrade path for next year as games improve and require more power. This way they don’t have to sell their card to upgrade. 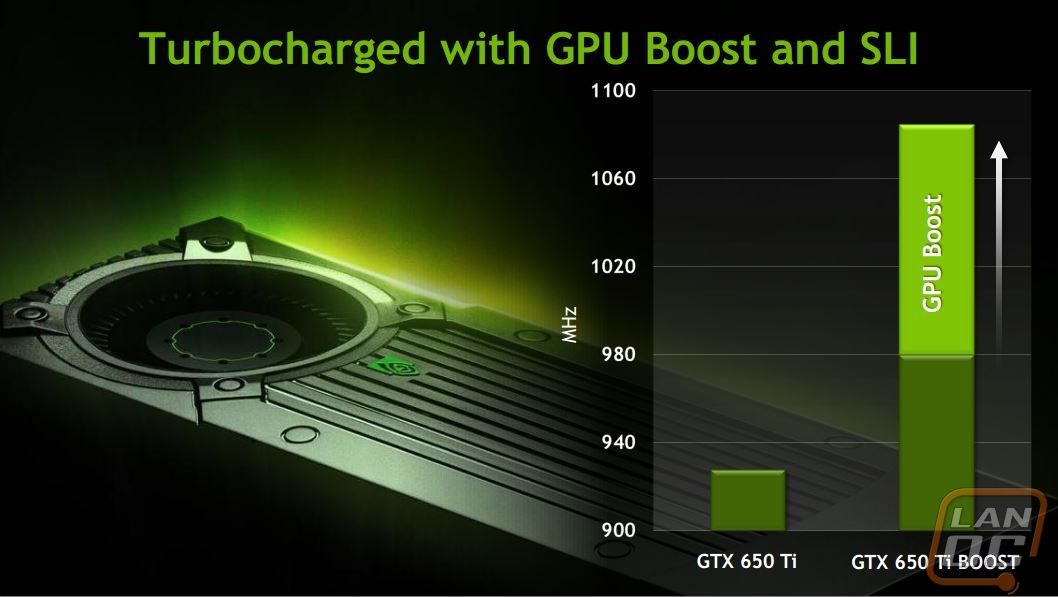 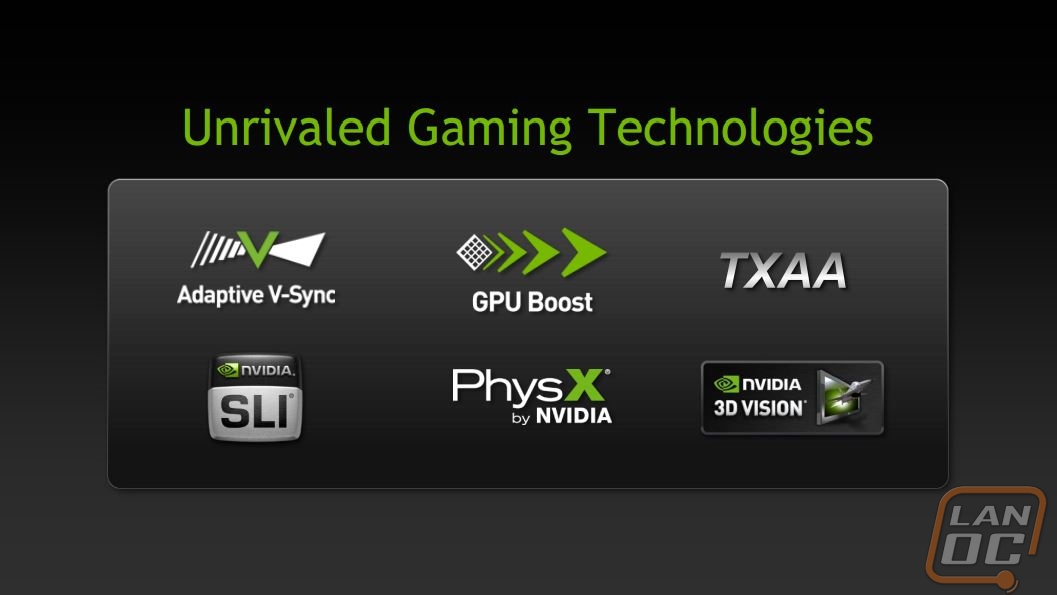 There are a few other features of the GTX 650 Ti Boost that I would like to bring up quickly as well. We have covered them in the past as well, but they do carry over. Along with GPU Boost and SLI, the card supports Adaptive V-Sync, TXAA, PhysX, and 3D Vision. Here are short breakdowns.

Adaptive V-Sync is an Nvidia technology that allows a little more fluidity when running V-Sync. With standard V-Sync you will normally run at a solid 60 FPS as long as your video card can handle it. When it can’t it will halve itself until it can run it. That means if your card can run 59 FPS it’s going to drop down to 30 until the card can do 60 FPS. Adaptive V-Sync basically turns off V-Sync in those situations then turns it back on once you are back up to 60 FPS.

TXAA is a recently introduced approach to reducing Aliasing, AKA smoother lines. Typical Anti-Aliasing is very demanding. TXAA gives similar results but is less demanding, for example TXAA 2x will give you results similar to 8xMSAA but at a performance similar to 2xMSAA.

Anyone who has played Borderlands 2 on an Nvidia video card knows what Physx can do. This is Nvidia’s physics simulation done via the video card. Without it you are stuck handling physics processing on your CPU, meaning most will be turned off. PhysX brings added realism to games with dynamic destruction, particle based fluids, and life-like animation.

3D Vision is Nvidia’s shutter glasses based 3D technology that gives you a 3D gaming experience when used with a supported monitor and their glasses. It’s obviously not for everyone, but for people who are looking for an even more realistic experience from their games there isn’t anything that compares to it.

On top of all of those features there is one other Nvidia feature I want to point out, it was even mentioned on our forums yesterday in relation to Nvidia’s latest driver update. The GeForce Experience is what Nvidia calls their new application that updates your drivers automatically as well as optimizes your game settings based on your hardware configuration. For someone who wants a hands off gaming experience you couldn’t ask for a better application. 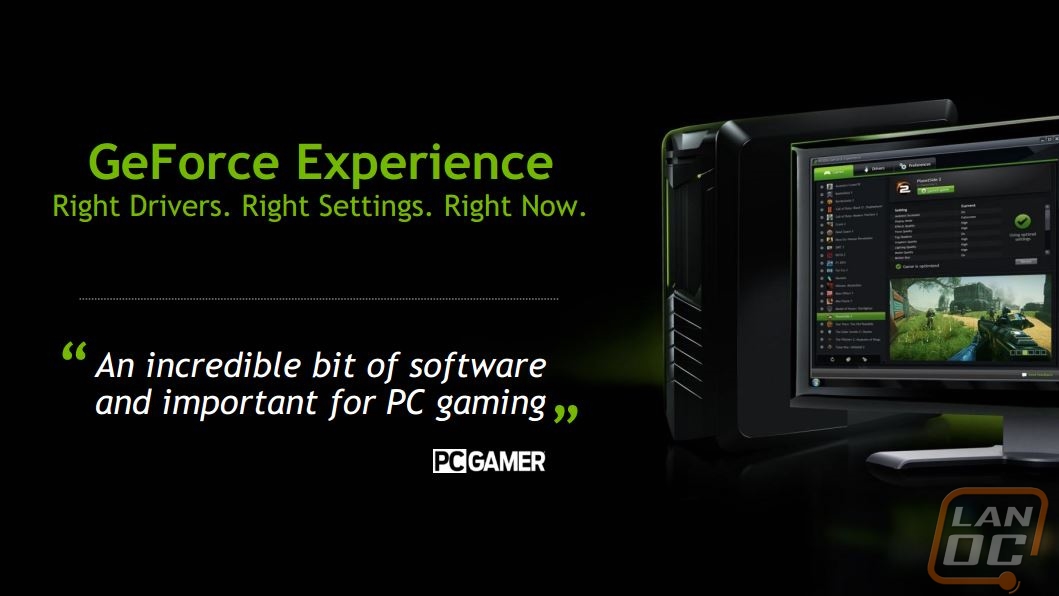 Last but far from least the GTX 650 Ti Boost will also be included in Nvidia’s free play bundle that gives you up to $75 in in game currency in Hawken, World of Tanks, and PlanetSide 2 ($25 for each game). While they may not be giving away specific game, free money is still free money even if it is in the form of in game currency. This way you can still game with your friends in free to play games but this time with a better tank for example. 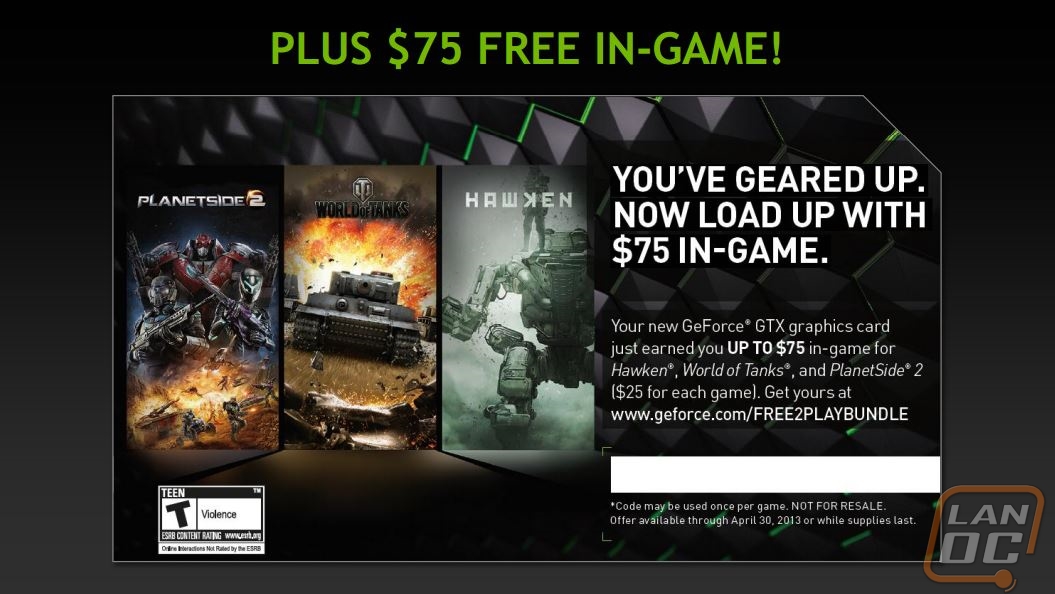 We have 1151 guests and one member online