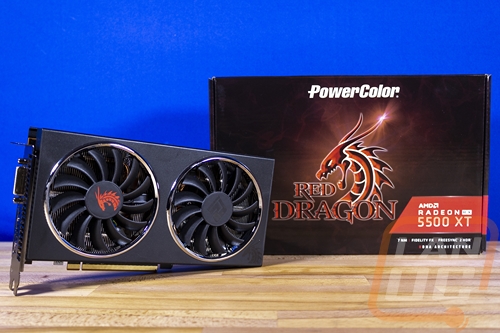 The introduction of the RX 5700 and RX 5700 XT which are based on AMD's new RDNA architecture was a huge deal partially because of the new architecture but also because AMD was back to focusing on the high-end GPU market. That launch has had its ups and downs but it has clearly had its impact including Nvidia launching its SUPER cards. Well, today's the day where AMD introduces their next lineup, the RX 5500 and RX 5500 XT (the non-XT model is OEM exclusive). This is bringing the same RDNA architecture with Navi to a more budget-focused lineup. For the RX 5500 XT which is the only card of the two that is available outside of OEMs, the RX 5500 XT has both 4GB and 8GB models. Well, today I’m going to check out what the 5500 XT has to offer by checking out the new PowerColor RX 5500 XT Red Dragon. I haven’t had a PowerColor card in the office in a long time and their Red Dragon cards have been extremely popular so I am especially excited to see what the card has going on.

Before jumping into our regular testing I did want to dive into what the RX 5500 XT is all about. As I mentioned before this is AMD's new Navi based card which is based on the new RDNA architecture. This is the same architecture that both of the RX 5700 series cards are based on. When on AMDs call about this launch they highlighted that the 5700 Series is their 1440p gaming-focused cards and the RX 5500 XT is their new 1080p gaming card. RDNA is designed from the ground up as a change from the older GCN architecture. Navi is actually a mix between the two, but RDNA as a whole is designed to optimize single-threaded performance, something that Vega didn’t do as well but is very important with gaming specifically. The RX 5500 XT, like the 5700 Series cards, is built on the 7nm manufacturing process as well which helps shrink the die size and help cut down power usage and thermals. 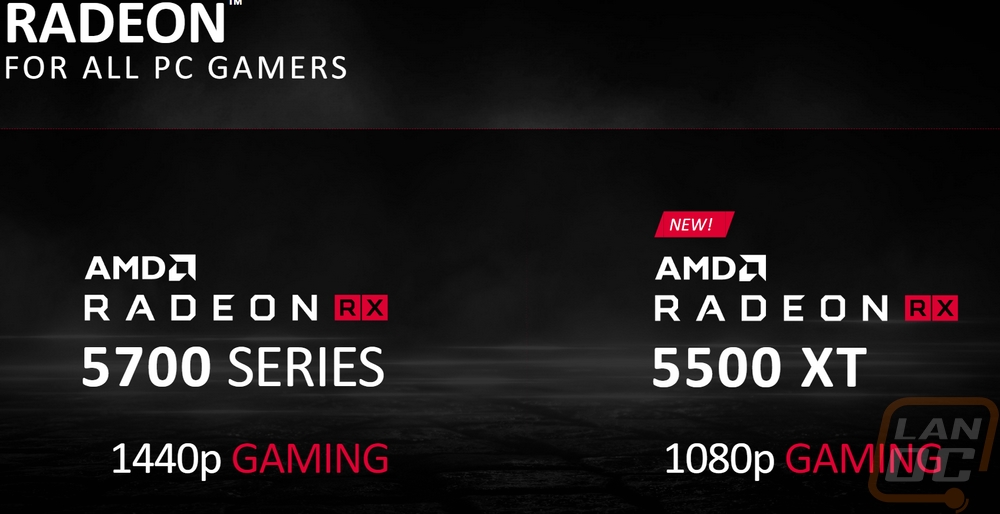 The RX 5500 XT gets all of the same software features that were introduced with the 5700 cards like Radeon Image Sharpening, Anti-Lag, and Radeon Boost. It also has its own game bundle as well, which I just have to point out how great it is that we are back to including game bundles with cards. The RX 5500 XT has the Raise the Game bundle which gets you Iceboard Master Edition and a 3 month Xbox Game Pass. Not as good as the games included with the RX 5700 Series cards, but still a nice addition.

As for the details on the RX 5500 XT. Well, it comes with 22 compute units which for reference the RX 5700 has 36 and the 5700 XT has 40. This gets you 1408 stream processors and up to 5.2 TFLOPS of performance. AMD has it listed with a game clock speed of 1717 MHz and a boost of up to 1845 Mhz. There are both 4GB and 8GB variations available and both come with 14 Gbps GDDR6 memory. The 500 XT is also listed with a total 130-watt board power. The clock speeds are faster than the reference RX 5700 and 5700 XT but it is the huge gap in compute units that makes the big difference between the cards. The other big difference which AMD didn’t list in their slides but did in the full spec sheet below is the memory interface which is just a 128-bit interface. For reference on this one, the Nvidia GTX 1650 SUPER has the same 128-bit memory interface but is only available with 4GB of VRam where the next step up is the GTX 1660 which has slower memory but has a 192-bit interface and 6GB of memory. The 8GB of memory with the small controller is interesting but I may have to test later with both the 4GB and 8GB next to each other to see if it causes any issues. 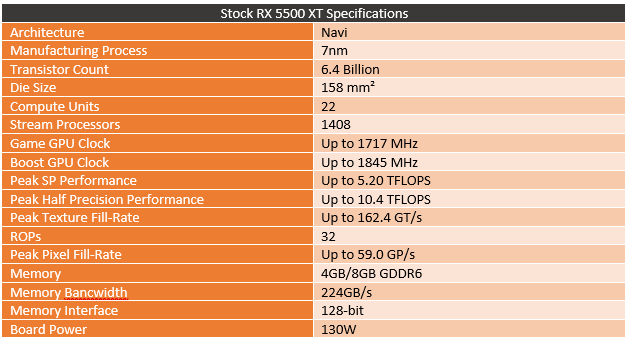 As always I do take a look at GPUz before starting my testing to confirm that the specifications line up. Before launch, I don’t have the Red Dragons specifications but GPUz does confirm that it has the same clock speeds as AMD provided for the base RX 5500 XT, namely the 1845 MHz boost clock. GPUz also documents the card BIOS tested and the driver which btw was the pre-launch driver provided to press. 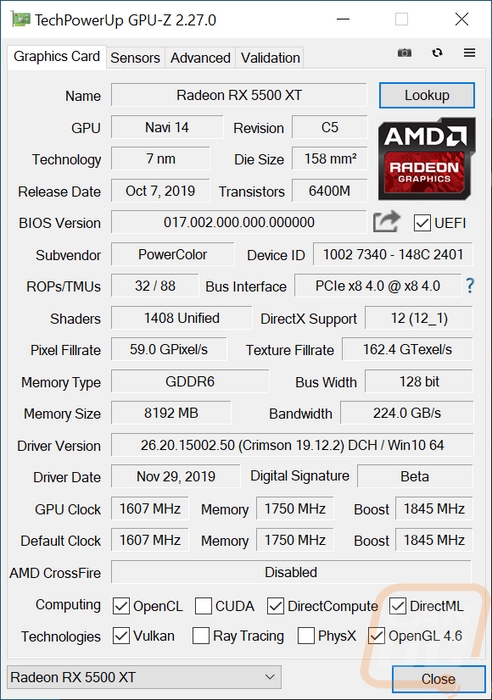 We have 1432 guests and one member online