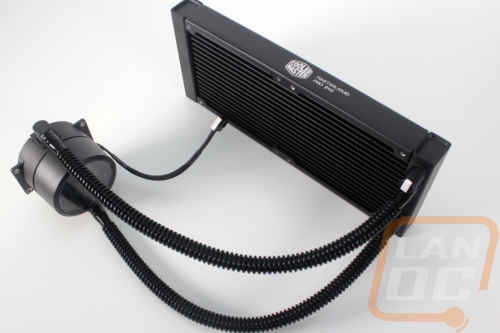 Before I dive into testing I did have to install the MasterLiquid 240. To get started with this I pre-installed the two fans onto the radiator. Depending on your case configuration you will sometimes have to install the fans and the radiator into the case at the same time but Cooler Master also has a new design that can help with that. The included fan screws are actually thumbscrews but they also have a threading in the end. You can install the fans and then use the included screws to attached the fans and radiator into your case. The downside to this is the thumbscrews are thick and the fans won’t get installed flush against the outside of your case. I would love to see them also include a set of normal long screws for situations where the extra thickness won’t work. That said it was really easy to install the fans with the thumbscrews. 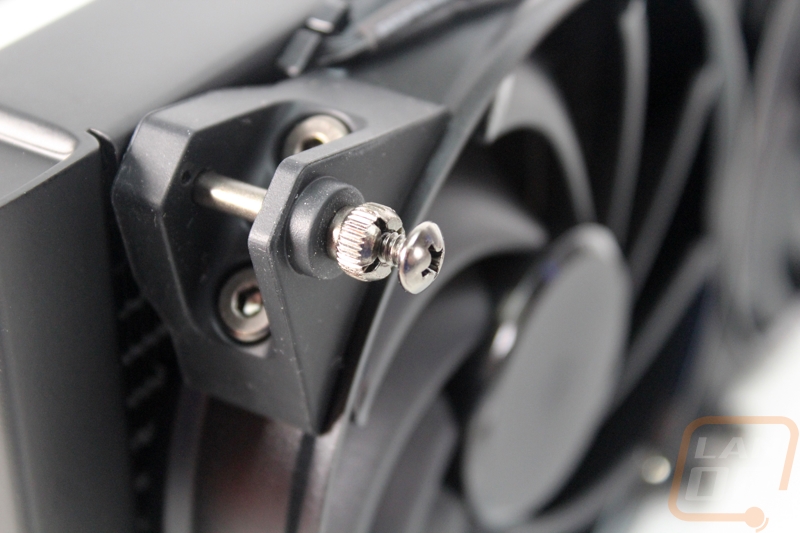 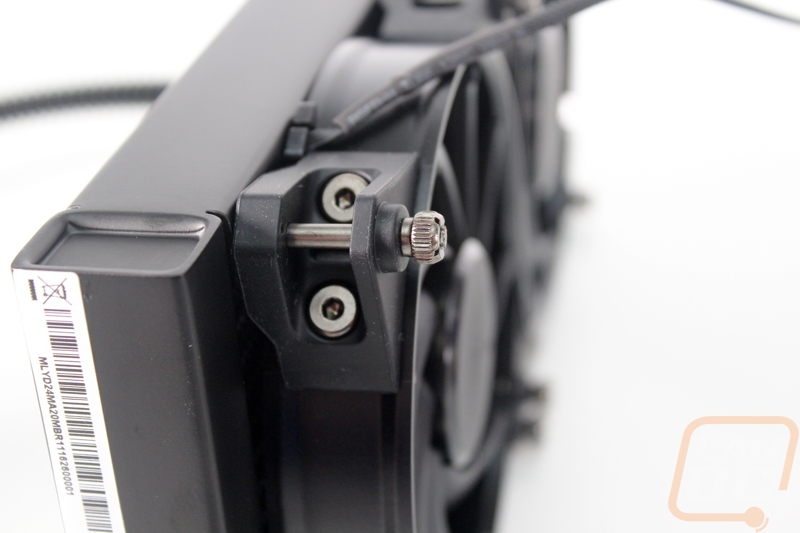 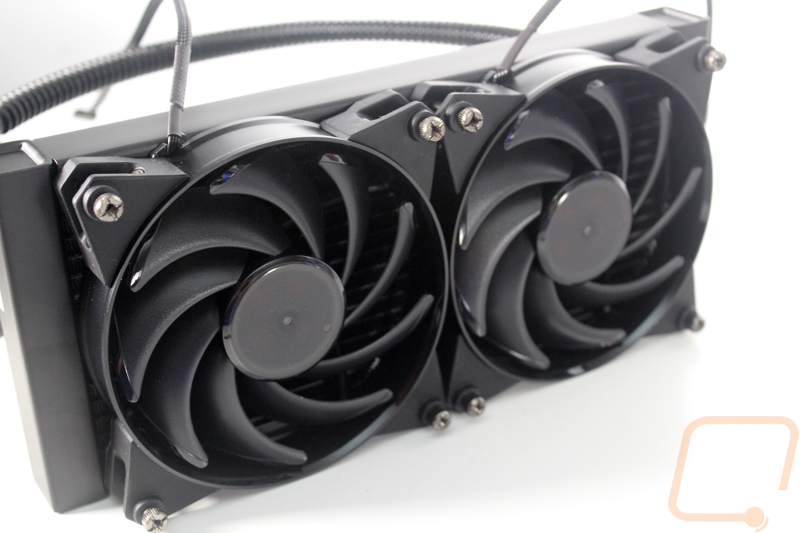 With our fans installed I just needed to sort through all of our parts and figure out what I needed for our test bench. For a 2011 socket build I actually only needed the Intel brackets, the standoffs, and the top bolts. I did also have to use four screws to install the brackets but I forgot them in the photo below. 2011 socket systems don’t need a backplate because the mounting system is built into the socket itself. 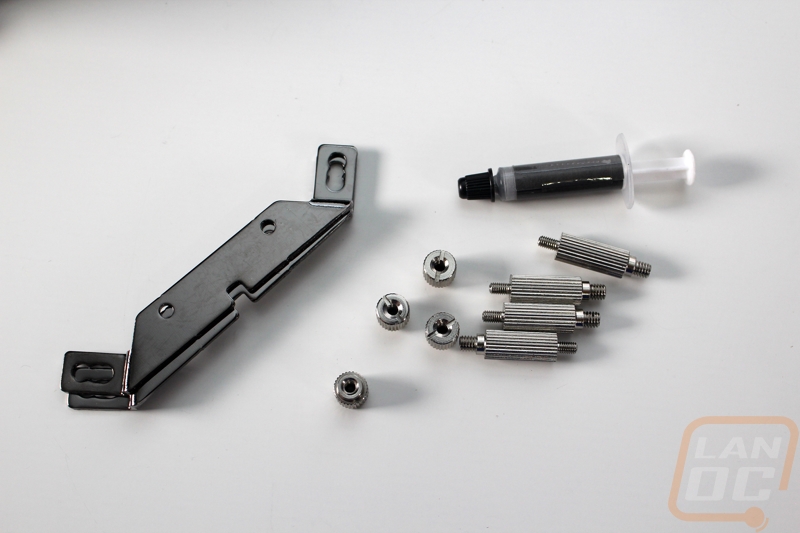 So I preinstalled the standoffs, this was easy because they are designed to be installed without any tools. From there I installed the two mounting brackets onto the pump. Then I put thermal paste on our CPU and installed the pump. I then used the four nuts to tighten everything down. 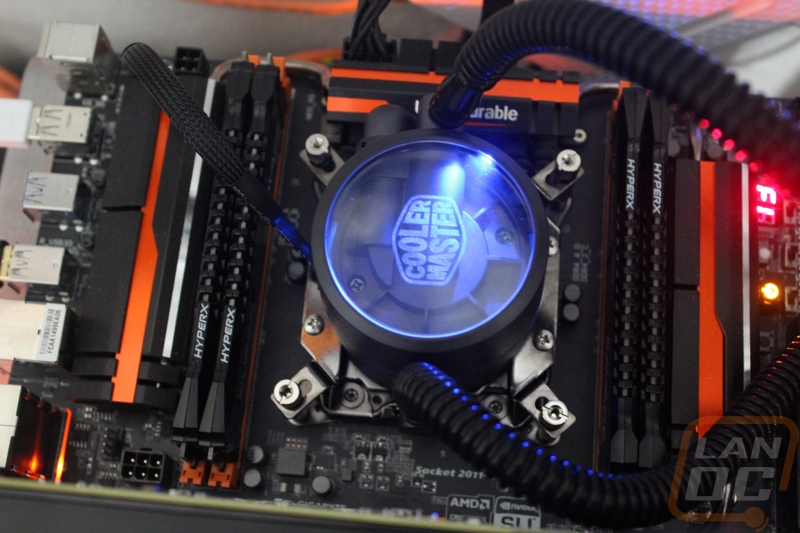 With everything installed I jumped into our testing. Due to our test bench being completely new after our old one died, I don’t have a lot of our past cooler results to compare the MasterLiquid 240 with, but I did test our normal Noctua NH-U12S against the water cooling to get an idea of overall performance. I started off my testing by testing the noise performance. With air cooling, this involves just testing the fans but for water cooling, I test both the pump and the fans and go with whatever is the loudest. When I first turned the MasterLiquid 240 up to 100% pump speed there was a bit of extra noise, but once the air that must have been in the lines cleared out it was the fans that were the noisiest part of the cooling. I did my testing using the fan on the middle fan setting that they ship on as well. What I found was the dual fans of the MasterLiquid 240 when turned all the way up run at about 500 RPM faster than our Noctua cooler and with that were 4 decibels louder. That is only at 100% fan speed and frankly, you shouldn’t be hitting that in normal use. I was, however, impressed with the 50% fan speed numbers as well as the 25%.

The second half of my testing was, of course, focusing on temperature testing. I used Intel's Extreme Tuning Utility to document the temperature directly on the CPU, not the thermal sensor the motherboard uses under the CPU. Letting the CPU run at idle with nothing running the temperatures settled down to an impressive 32 degrees Celsius in our 70-degree Fahrenheit office. The Noctua that was also performing well was a few degrees higher at 35 degrees. Idle temps aren’t all that important, though, they mainly show that we have good contact with the CPU. To really test things I used Prime95 with the FFT setting to heat up the CPU for a half hour and documented the highest peak temperature. I did this twice, first I tested with the fan settings running on their default profile from our motherboard to see where things would settle then I tested again at 100% fan speed. I do this to see what you should expect for everyday performance in a worse case situation and then I test at 100% fan speed to see the max cooling the setup is capable of if noise was never an issue. Here the MasterLiquid came in two degrees under the Noctua cooler under normal settings but three degrees with the fans cranked up. No huge shock here, the radiator has more cooling surface than the Noctua cooler and also has twice the fans. Remember these are on CPU numbers, our motherboard software was actually showing 10 or more degrees cooler.

We have 1647 guests and one member online