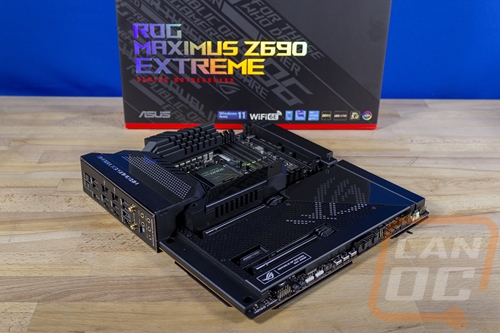 All of that is on top of the base features of the Maximus Z690 Extreme like its 24+1  VRM phases and the crazy cooling built around that. Or the heatsink that covers the entire top of the motherboard and the backplate that does the same for the bottom. You also have a variety of RGB lighting setups even before plugging any other lighting in like the underglows, heatsink lighting, and the LED Matrix on top of the rear I/O. I could go on for days with the overall feature list. But for me, it’s the small details that I was happiest with like the one push button that unlocks the PCIe slot and the tool-less M.2 slots which make working with the Maximus Z690 Extreme easier especially if it is a test bench or you are changing things up often with overclocking.

I only ran into one issue with the overall setup and that was an issue that I have had with all Asus boards recently. While they have a great Intel wireless NIC the performance is always a touch slower than the competition for me which I have to assume is related to the antenna design they have been using for the last few generations. Beyond that my only other issue would be with the price which is a given considering the Maximus Z690 Extreme will run you $1099.99 which is more than most of my PCs have cost. But we can’t say that Asus isn’t giving the Maximus Z690 Extreme the features needed to justify a high price because the board is loaded to the gills and some of the accessories that come with the board alone would be expensive if you were buying them separate like the Voltician aka the oscilloscope. Overall this is clearly only a board for the craziest highest-end builds and typically for those builds pricing doesn’t even matter anymore. So I doubt anyone buying the Maximus Z690 Extreme is going to be complaining too much about the price, but they will be enjoying all of its features. For the rest of us Plebs, Asus has a long list of other Z690 boards that might be better for us. 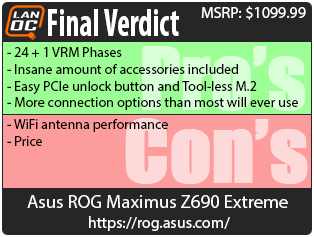 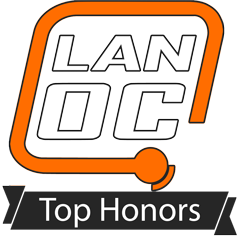 You might call him obsessed or just a hardcore geek. Wes's obsession with gaming hardware and gadgets isn't anything new, he could be found taking things apart even as a child. When not poking around in PC's he can be found playing League of Legends, Awesomenauts, or Civilization 5 or watching a wide variety of TV shows and Movies. A car guy at heart, the same things that draw him into tweaking cars apply when building good looking fast computers. If you are interested in writing for Wes here at LanOC you can reach out to him directly using our contact form.
Discuss this article
Log in to comment
Posts in discussion: Asus ROG Maximus Z690 Extreme

We have 1426 guests and one member online