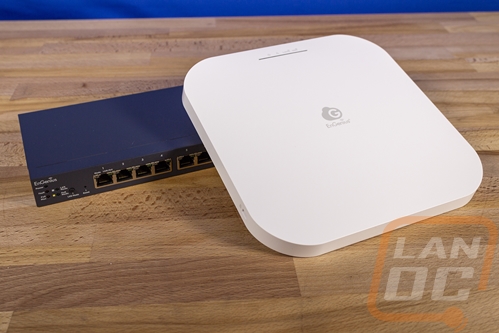 To get the full experience with the EnGenius Cloud and to make sure everything worked smoothly EnGenius did send both the ECW230 WiFi 6 Access Point and the ECS1008P 8-port PoE Managed Switch so I will be taking a look at both here. First up on the plate is the ECS1008P 8-port PoE Managed Switch. Both are business focused which is ideal for my home office considering the high number of devices running on the network. Because of that, they don’t exactly go crazy on the packaging as well. The ECS1008P comes in a standard brown box. They have EnGenius printed on the top and then a white sticker on the front that lets you know what model it is along with the full name. They also list that it is EnGenius Cloud-enabled, is a full featured layer 2 PoE Switch, and that the IEEE 802.3af PoE is on all 8 ports with a total of 55 watts of PoE power. What you will find in the box is also listed down at the bottom as well 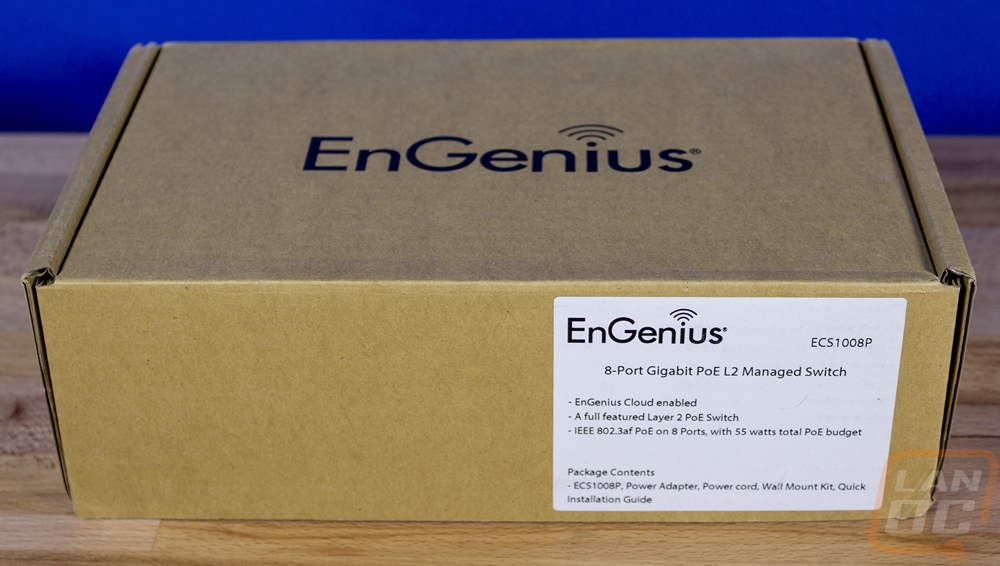 Speaking of what you will find in the box. Once you open it up, you will find the ECS1008P wrapped up in plastic and secured with cardboard on the top and bottom edge to keep it from moving around. There is a quick installation guide up on top. Then up under the switch, you will find a few other accessories. The power supply is included and thankfully it isn’t a power wart. I would prefer it to be built into the switch, but at the switches size, it wouldn’t fit. You also get a wall mount kit which includes two screws with plastic drywall mounts and a Velcro pad with sticky tape on each side for hanging up the power supply as well. 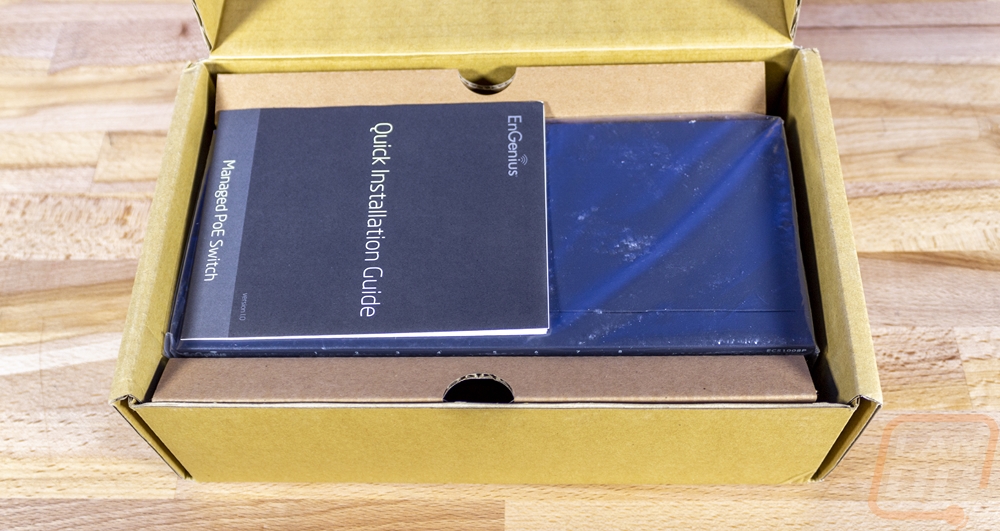 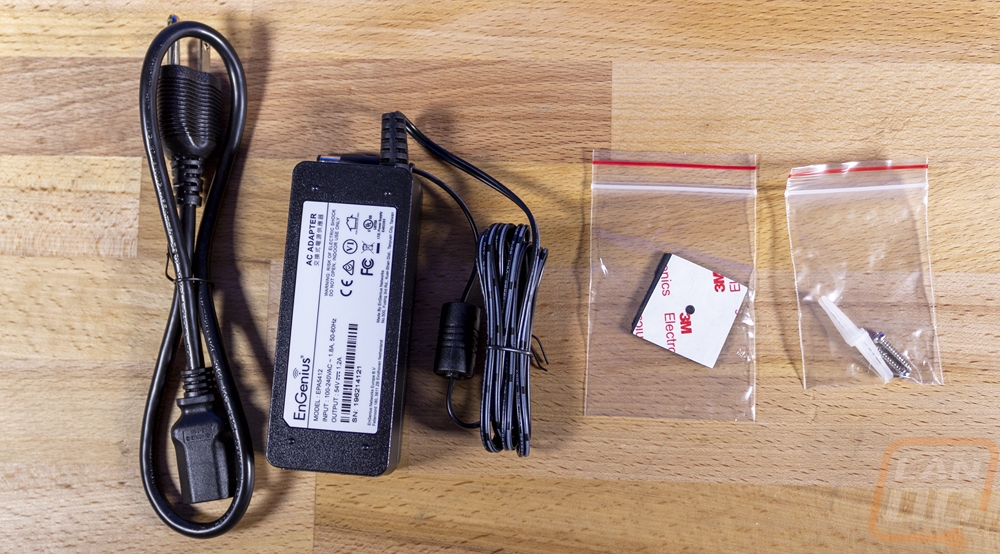 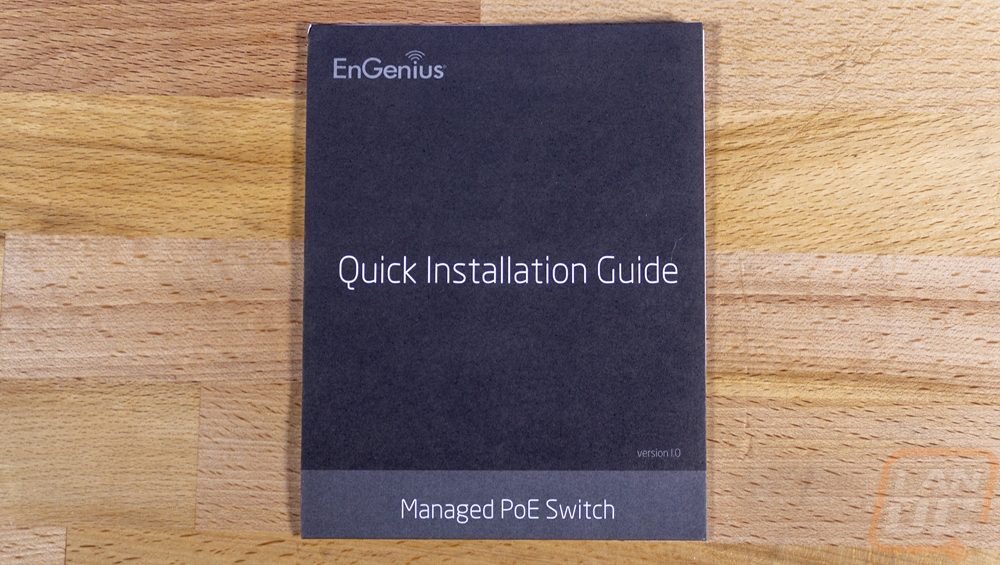 So the ECS1008P comes in at 9.44 inches wide, 4.13 inches deep and 1.06 inches tall which is wider than most 8 port switches but not nearly wide enough to be a rack-mounted switch. Like normal the 8 ports are split up into two groups of four and each is labeled at the top. They are all 10/100/1000 Mbps ports and each is also PoE capable which is one of the reasons they included the ECS1008P with the ECW230. Each port is 802.3af which is the standard PoE and it has a total of 55 watts to share across the 8 ports. Each port has two status LEDs at the top. Then over on the left, there are a few other LEDs. One shows that the switch is powered on, one indicates a fault, and there is one that will let you know that the PoE is maxed out which is really nice. There is also one showing LAN mode and another for PoE mode. The hard reset button is also tucked away here.

For ventilation, EnGenius vented both of the ends well but there aren’t any fans pushing. Around on the back, there is some ventilation but it isn’t as open as on the sides. The back does have a ground tab and over on the right side, you have the input for the power supply and a small power switch.

To pair with the wall hanging kit that is included, the bottom has two mounting points that can be hung horizontally both directions or vertical. Then in the center, they have the main sticker which has the model info as well as your serial number and mac address as well as a QR code that you will use during setup with the EnGenius Cloud app on your phone.

The other half of the pair is the ECW230 WiFi 6 Access Point that I’m here to take a look at. Like the switch, EnGenius packages the ECW230 in a brown box as well. This one, however, isn’t a generic box where they use the sticker to get the model name on the box. The ECW230’s box does have the model name printed on it and for the branding, they went with the EnGenius Cloud branding. Both the switch and the access point use it, but this being a newer model, I think they are pushing it more. When you open the box up, the AP comes covered in plastic and sitting in a formed cardboard tray to keep it safe. 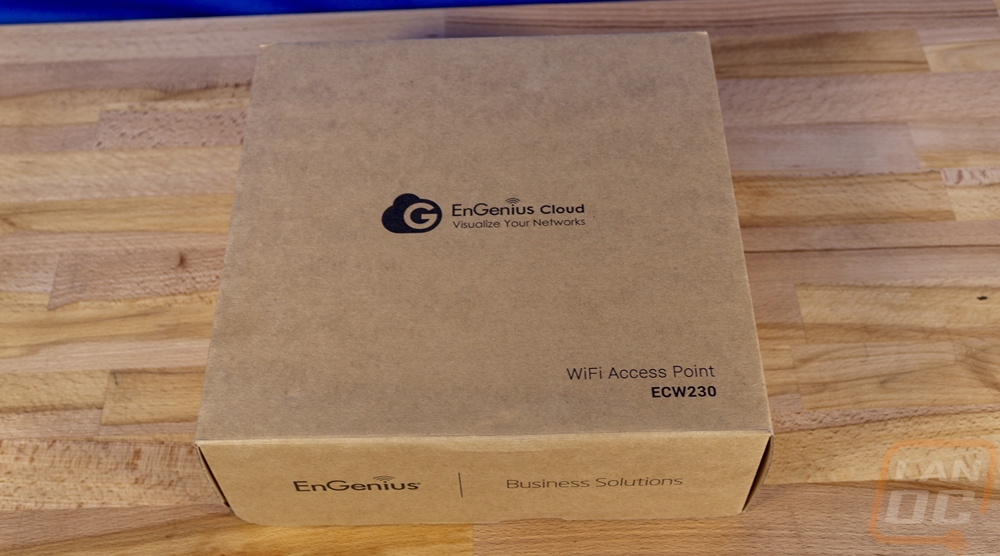 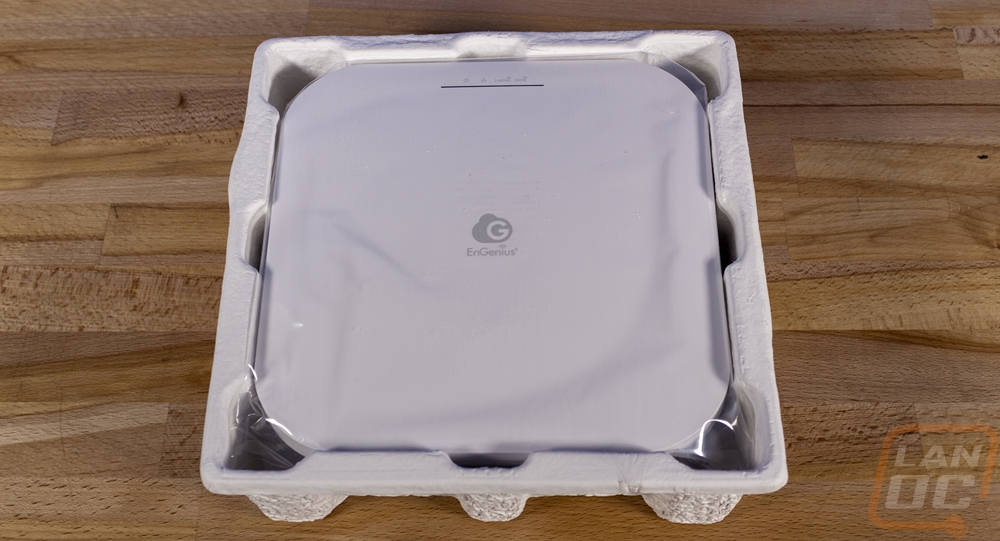 The ECW230 WiFi 6 Access Point does come with accessories as well and documentation. They were all up under the AP in the box. You get two mounts and they are really similar. One has the two mounting holes in it to use the two included screws and drywall anchors. The reason for two mounts though is because they have built-in tabs that will attach to drop ceilings and there are two different widths for the drop ceiling grids.  So one support 9/16” and the other 15/16”. EnGenius also includes an instruction manual that shows you how to get going with their cloud setup. 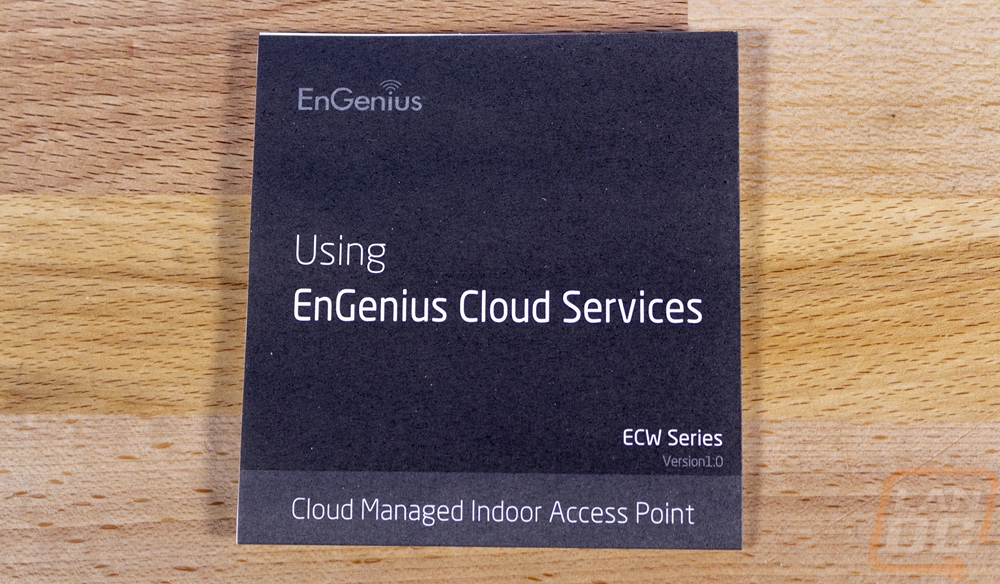 So the ECW230 is a squared-off shape with rounded corners and is 8.27 inches wide and tall. Then it is 1.31 inches thick. This is a little thinner than the Unifi AP that I normally use but its shape is more consistent where the Unifi is thick in the middle but gets thin around the edges and doesn’t end up looking as thick. It is all white which goes well with most ceilings and it has the EnGenius Cloud logo right in the center. The top also has a slit in it which is where you will find all of the status LEDs. There is one for power, one showing network traffic/status, then two that show WiFi traffic/status. One is for 2.4 GHz and the other is 5 GHz. 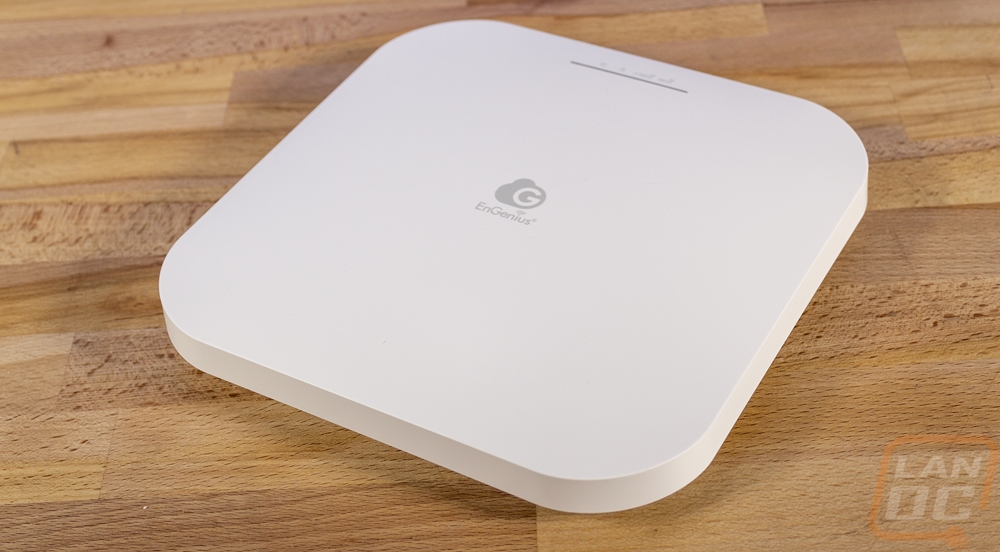 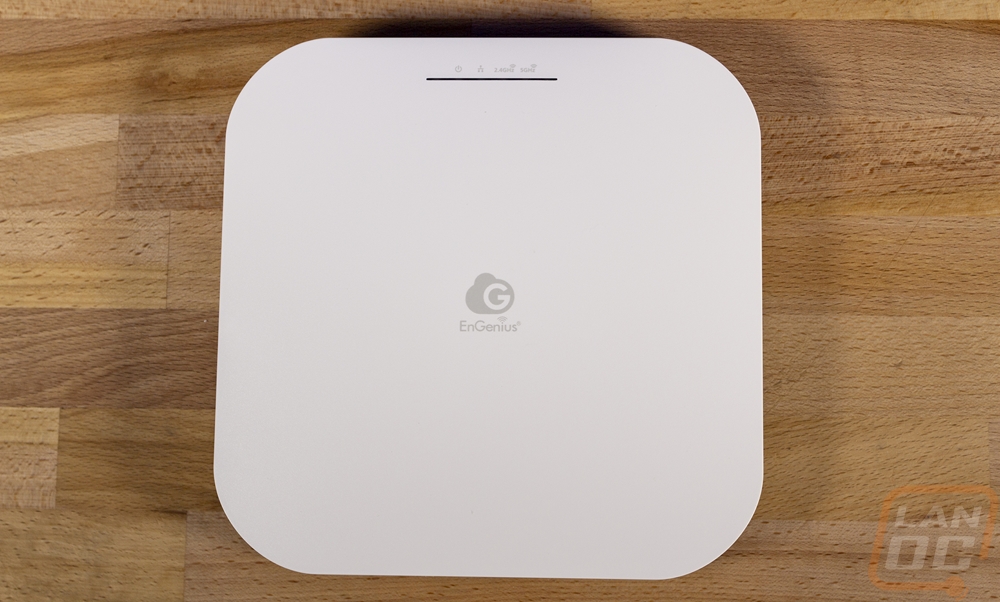 The side profile of the ECW230 helps show part of why it is thick as well. The bottom has that same rounded shape, while pulls the outside edges away from the ceiling. This does help give access to the release clip for the mount. But I do prefer the flush-mount design that our Ubiquiti access point has over this. The ECW230 does also have a Kensington style locking hole as well if you need to secure the device, especially if you are using it in a temporary location or it is public and within reach.

Now the bottom doesn’t have that same white finish. In fact, the entire bottom of the ECW230 is silver. In the center, you have a sticker with all of the normal information as well as your serial number and mac address. It also has a small QR code used for setup as well, but I will touch on that more later. Around that are the two mounting tabs, these slide over the included ceiling mount. But they do also have screw holes that you can use as well. Then under that is an opening. This is where the ECW230 gets plugged in. It does run off PoE which is what I prefer for my access points and cameras but in addition to the network port, there is a DC12V plug as well if you prefer to not run PoE. It doesn’t, however, come with a power supply if that is the direction you want to go. There is also a tiny pinhole reset button as well. Now EnGenius provided a 10/100/1000 switch for testing, but as you can see the ECW230 does actually have a 2.5G network port so if you have a faster network you can take advantage of it. This is great for WiFi 6 because it is designed more for the number of devices connected than individual bandwidth so 2.5G helps keep speeds up when spread across multiple devices. 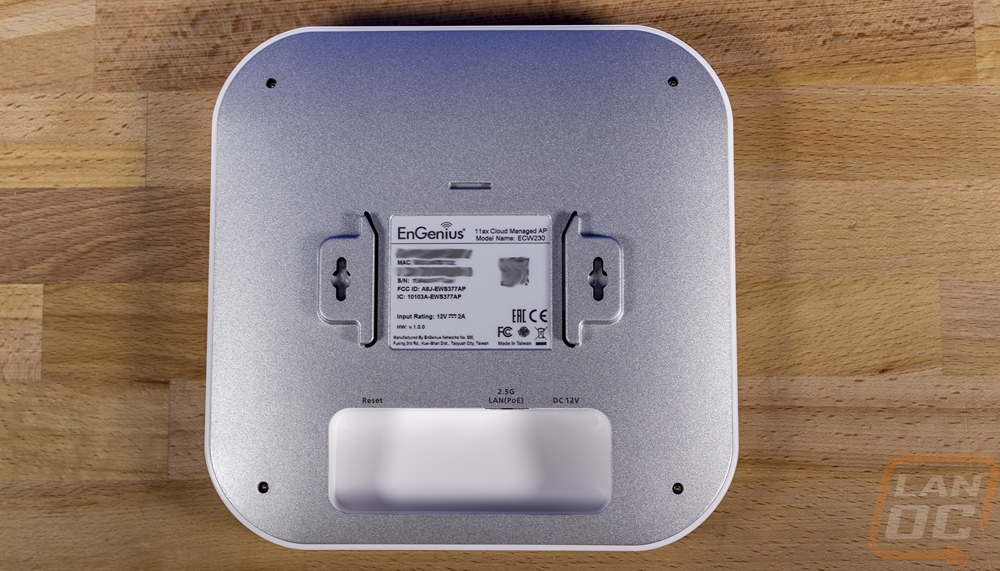 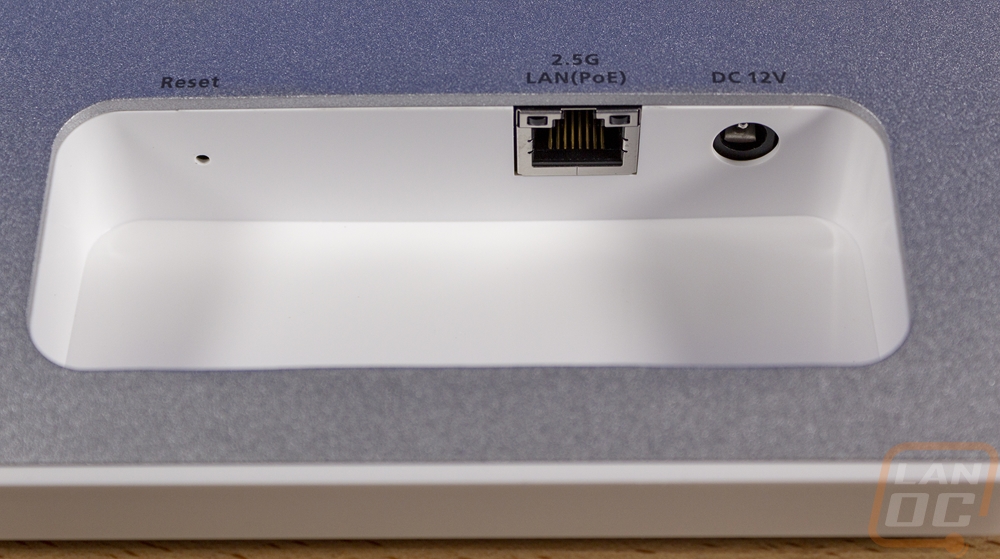 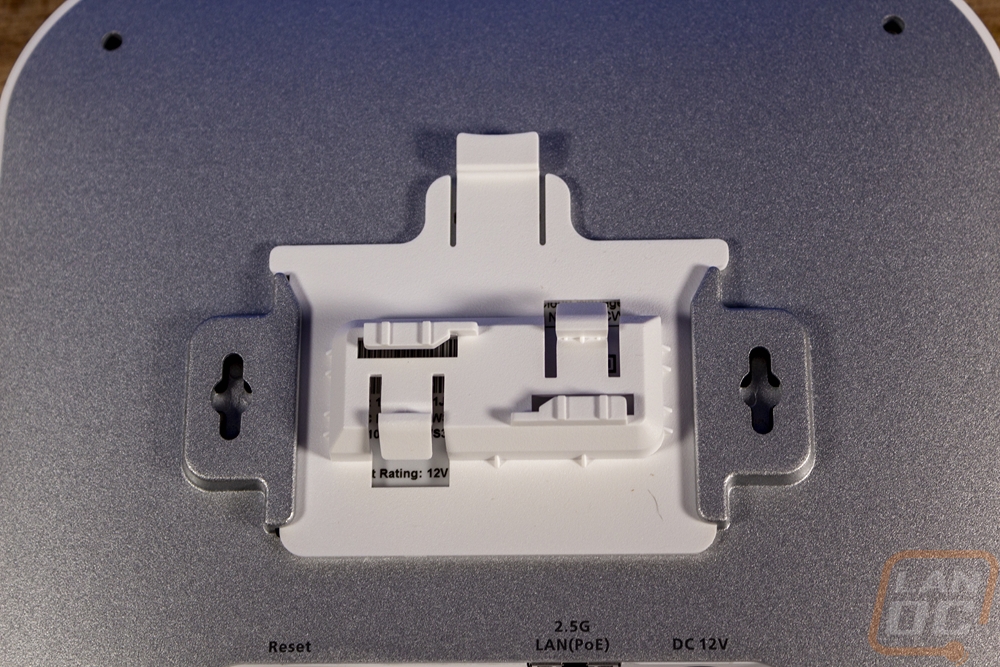 We have 1383 guests and one member online