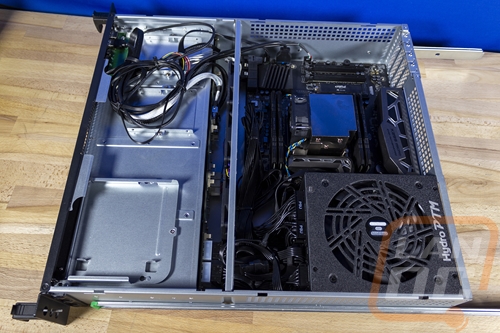 So in addition to updating our storage capacity and trying out TrueNas, one of the other big goals with this project has been to clean up our server rack area. This has been an ongoing project which has included another NAS, redoing some wiring, and updating switches as well. But for this project part of this was to combine two tower NAS that I had sitting on a shelf in our rack which wasn’t exactly very efficient when it comes to space and it wasn’t that great for their cooling as well. So in addition to the Silverstone RM21-308 rack-mountable case that I went with. I also wanted to make it accessible once installed as well. So I would need rails. Our rack, like a lot of people who have homelabs, was picked up locally from a long gone business which means it was an older rack. The downside to this was that it doesn’t have the newer square hole mounting system. So I had to be extra careful when picking out rails. Thankfully Silverstone had a solution and it came recommended right at the bottom of their page about the RM21-308 case. Silverstone sent over their SST-RMS03-24 rails.

They are of course packaged in a regular old brown box with tape around it in two places to keep things closed and just one white sticker with the model name and barcode on it. Inside the two rails have foam at both ends holding them in the middle and safe. Then there is a small accessory bag as well.

The accessories are what make it possible for these rails to work with our older style rack. The rails themselves are set up for the newer square mounts but they include four square to round hole rail adapters with everything. You also get three sets of screws. The smaller screws are for installing the rails to the case then you have two sizes for your rack depending on the thread type. They also include a basic one page instruction guide as well. 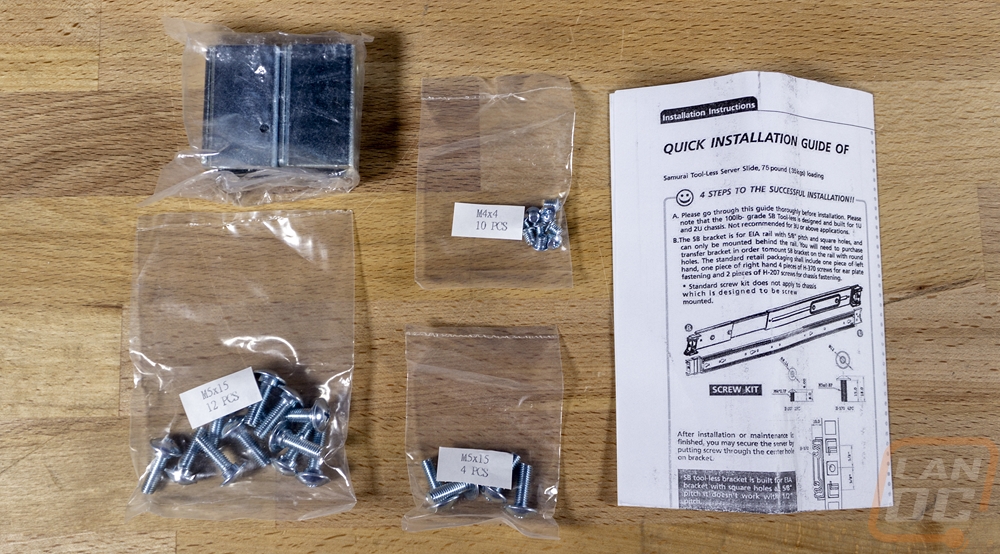 Here is what the adapters look like and you might be surprised at how much finding more of these can cost. Rack mounting things is still new to me when it isn’t something that can be hung by the ears like our switches and patch panels. So I went looking to see if I could find anymore to mount another server that I was unable to get round hole rails for and I expected them to be a few bucks. They are a lot more than that. So it is nice that Silverstone includes them with the RMS03-24 rails.

The rails have the toolless mounting with the square holes and they are bearing rails that can support up to 100 pounds. These specifically are the 24-inch long model but they do have other lengths as well. They have a variety of mounting holes down the rail as well as a few keyholes as well for an easier installation on the Silverstone cases. They also have each rail clearly labeled as left and right both with a sticker and it is also etched on the smaller inside rail as well in case you get mixed up when you have them apart. 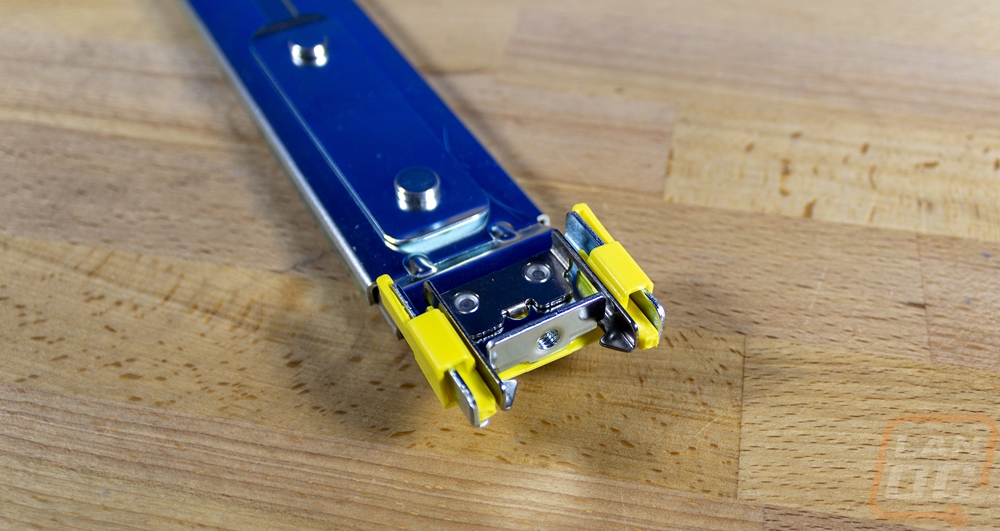 Installing the rails is a three part process. You need to install the inner rails on the server. Then you need the outer rails installed into your rack. Then you have to put them back together as you install the server into the rack. Below are the inner rails which have a green cap on them. The Silverstone case had two round hooks already on the sides ready for these rails. So this part of the installation was really easy. You line the keyholes up and slide them over. Then you just have a few screws to install to keep things from moving around. This view also gives a great look at one of the latches on the rails. Specifically, this is the latch you have to lift up on if you want to remove the rail apart from the outer or yellow rail.

Now you might be wondering how the round hole to square hole adapters work. Well, the instructions didn’t explain them much at all but this is how I put them to use. I mounted them behind my rail mounts. This can be very complicated because the adapter and my rack itself both have threaded holes. So you have to get the screw started with it perfectly flush or it won't mount closely and put extra strain on the screws. I had to do this on all four corners. This did cause a problem though. So our 24 rails were already a close fit for our rack which is 24 inches but like I said before I am new to this. So adding these adapters on each end made things REALLY tight for the rails even at their shortest setting. I ended up having to flip the rear adapters around and mount them to the outside. This wouldn’t work on the front of the rack because they would make it too tight to pull the server out, but in the back, they weren’t in the way. 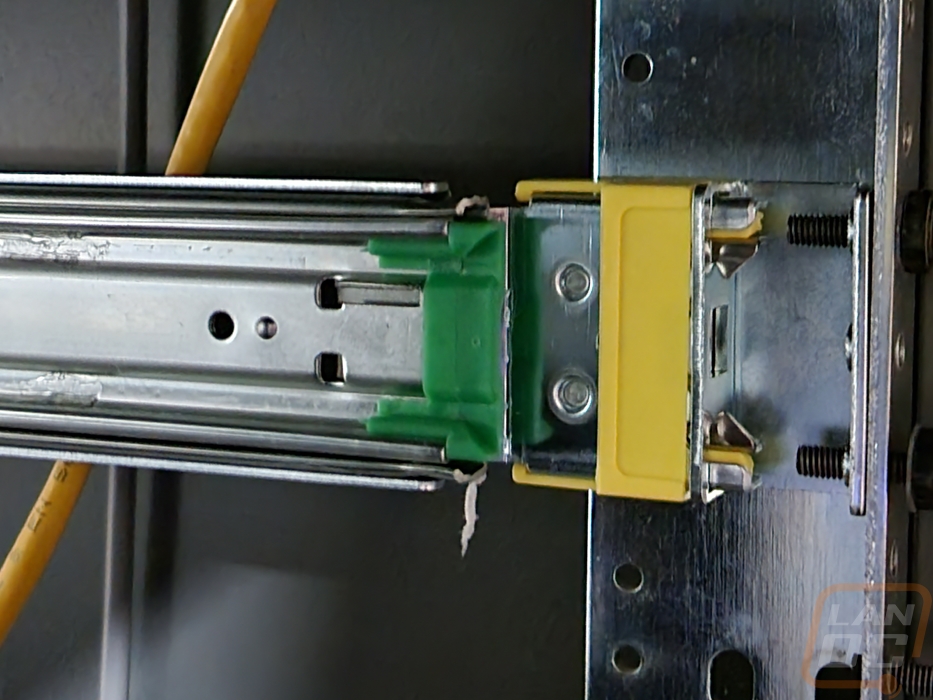 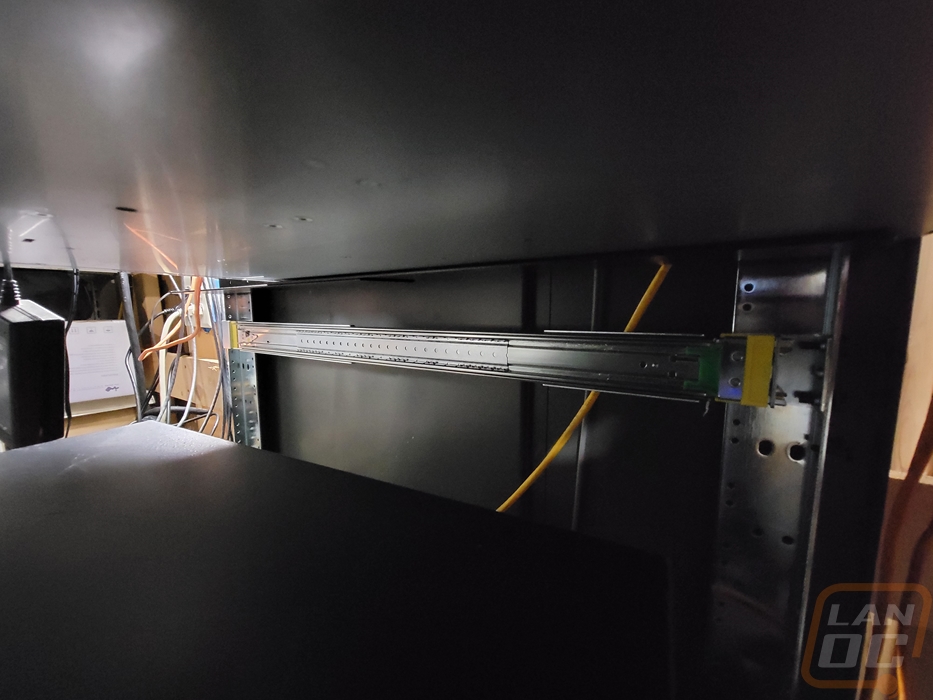 The installation wasn’t done there of course. I did need to install the server into the rack so we can skip ahead a little. Getting the server installed was a bit of a nightmare for me. I was trying to do it by myself and where I have it mounted is high up on our rack because I haven’t gotten rid of the other NAS until I can move data over. I would first recommend doing this without your hard drives installed. Both because of the weight that they add, but also because if you do drop things at all the drives are easier to damage, and if you are reusing hardware like I am they can also end up being a majority of the costs of your system as well. The biggest issue I ran into was that one rail slid in and was perfect but the second looked like it was in. But would fall out when you pull the server out. Talk about an oh-crap moment when your new server starts to fall. I ended up having to get a second pair of hands to finally get things latched in. The other issue was a small one but related to the round to square adapter. This whole system is designed to latch when pushed into the rack with the included handles included with the case. But those are designed to work with the square holes as well so I couldn’t use them. I may add them back in the future if I pick up more of the adapters and mount them on the front of the rack as well. But as long as your rack is level you shouldn’t have to worry about anything.

We have 1294 guests and one member online