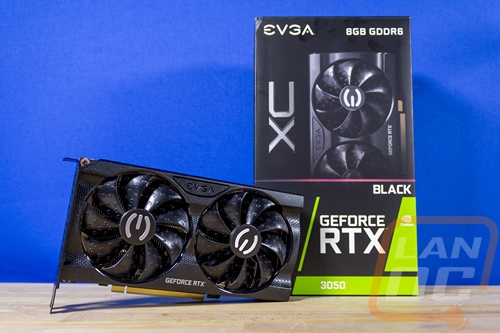 At CES this year both AMD and Nvidia announced new GPUs that would be coming soon. Both were focused on a little lower on their product stack which makes sense because that is the biggest market share. Steam hardware survey still has the GTX 1060 with the highest usage with the 1650, 1050 Ti, 2060, and then 1050 rounding out the top five. Most of those cards also haven’t moved up into the RTX range, so the new RTX 3050 may be the first introduction to ray tracing and tensor cores for a lot of people as well. Today I’m going to check out what the RTX 3050 is all about then put it to the test on our freshly updated test bench and test suite to see how it compares. There aren’t Founders Editions of the RTX 3050, so today I am checking out the RTX 3050 XC from EVGA.

So at CES, Nvidia’s big theme when announcing the RTX 3050 was “step up to RTX”. The RTX 3050 is Nvidia’s first time bringing out an RTX card in their XX50 range, previously the 3060 and 2060 were their lowest models with RTX features. It makes sense really, while everyone would love to have ray tracing and the tensor cores, ray tracing in games. Especially with the first generation of RTX cards was very demanding. No one would want to use those features on a mid-range card that couldn’t give you playable frame rates at those power levels. Not only that but adding the ray-tracing cores and tensor cores does add to the die size and with that overall cost. But today's market is much different, especially when it comes to costs and Nvidia feels like the 3050 is ready for the RTX treatment. RTX does add a lot of features that you might not consider, it isn’t JUST ray tracing although you do get that. The tensor cores also help with things like Nvidia Reflex, Nvidia Image Scaling, Nvidia Encoder, and their broadcast app as well. I personally think those features will be even more important for the RTX 3050 owners than ray tracing. Especially Reflex which is focused on lowering latency which is especially huge with FPS games and esports titles. Games like Fortnite, Escape from Tarkov, Apex Legends, Overwatch, Rust, and Valorant which are all very popular and don’t typically need ultra-high-end cards to play.

So the RTX 3050 is an Ampere based card, just like the rest of the 3000 series cards. So it does get some of the standard features like HDMI 2.1 support which the 3050 isn’t really a 4K focused card but it does also bring HDR support. It also helped bring AV1 decoding support which has been in the news a lot with AMD removing that from their just launched RX 6500 XT (I’ve got coverage coming soon, DHL/USPS has our card lost in the void right now). The 3050 also gets DLSS which I mentioned before, DLSS is a great way to get additional performance with very little quality difference. It is also a great way to offset some of the ray-tracing performance as well which I will look at in our testing.

Before getting into testing I did also run GPUz to double-check that our clock speeds match up with the specifications. The RTX 3050 XC Black is a stock clocked RTX 3050 so its boost clock is 1777 MHz which it did match (after an update for our prelaunch card from EVGA). I tested using the beta driver provided to the press ahead of the launch which is Nvidia 511.31 and the BIOS version is noted as well for future reference. 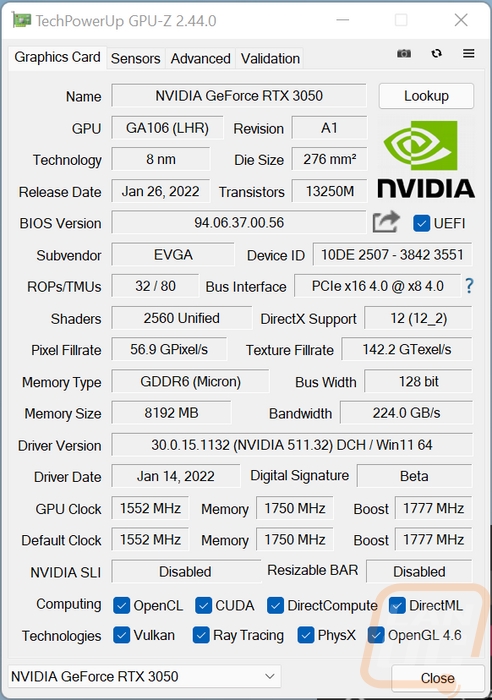 We have 1301 guests and one member online